The new series of diodes, as depicted in the above illustration, is available as two leaded single unit packages or as dual units with three leads, one of which connects to  a common cathode

MPS diodes shield the electric field from the Schottky barrier. This serves to reduce leakage currents, while also increasing surge current capability by means of hole injection. MPS diodes can handle the same amount of current as can pure silicon Schottky devices with only a slight increase in the forward voltage drop, and on the plus side, they do feature a notably higher degree of ruggedness.

Members of the Series

In the two tables below, left-clicking the part number in the leftmost column of the table opens up a detailed datasheet for the specific device.

There are seven members of the series that are composed of a single diode. They are: 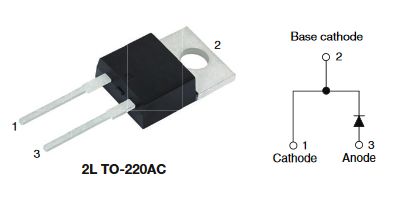 There are three members of the series that are composed of two diodes are listed below. In this table the average rectified forward currents are for each of the two diodes within the package.