Additional applications will include industrial equipment and home appliances. 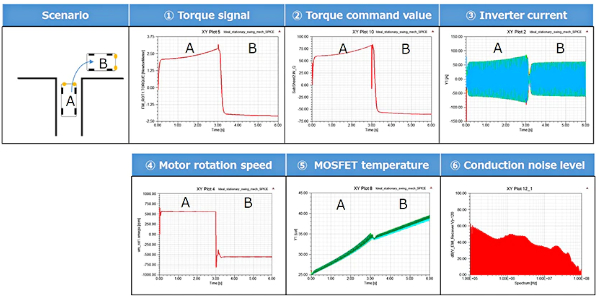 From a technical standpoint, MBD is a software-based development methodology that simulates models and evaluates performance in real-time.

The technology was originally introduced in the industry to keep up with the increasingly advanced complexity of automotive equipment, as electric vehicles (EVs) and their advanced driver-assistance systems become more widespread.

In addition, having detailed simulation models that include the behavior of semiconductors in specific blocks enables the observation of heat and electromagnetic interference (EMI), which are crucial parameters for estimating the performance of automotive equipment.

Despite the usefulness of traditional MBD technologies, however, as models become more detailed and precise, verification times are growing longer.

For context, the company’s previous simulation technology could reportedly simulate semiconductor-based electronic circuits and their mechanical components, gears, and shafts on a microsecond basis.

However, the technology was also technically complicated, as it was based on the SPICE (Simulation Program with Integrated Circuit Emphasis) model.

While extremely useful, SPICE needs to define over 100 parameters for the simulation of semiconductor behavior, making the overall process potentially slower.

To circumvent these technical issues, Accu-ROM separately calculates the electronic circuits and the mechanical components.

Moving forward, Toshiba said it will use Accu-ROM to promote the development of high-heat dissipation and low noise automotive semiconductors, as well as semiconductors for other applications, including industrial equipment and home appliances.