In addition, Infineon has introduced the HybridPACK Double Sided Cooling (DSC) S2, a technology upgrade to the existing HybridPACK DSC. This module (shown in the image above) targets main inverters up to 80kW in hybrid and plug-in hybrid electric vehicles with high power density requirements.

All new derivatives of the HybridPACK Drive have the same footprint as the already established lead device (FS820R08A6P2x) in the product family. This will allow system developers to scale inverter performance quickly and without a major system redesign.

At the lower-performance end of the product family, the new HybridPACK Drive Flat (FS660R08A6P2Fx) and Wave (FS770R08A6P2x) are cost-optimized for 100kW up to 150kW inverters respectively. Their baseplates - which connect to the cooler of the inverter - have different structures and thus lead to different capabilities of thermal dissipation. 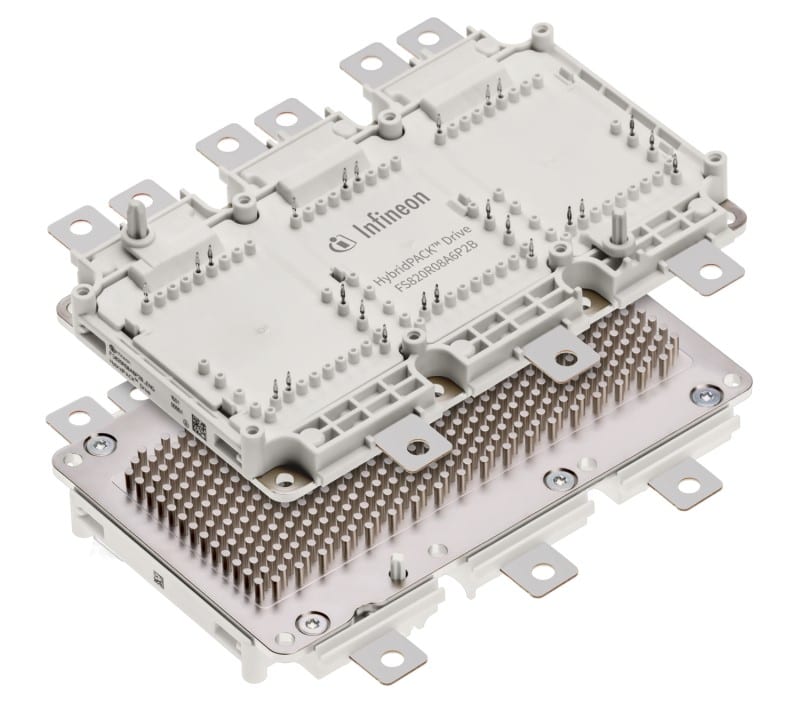 The PinFin baseplate in the HybridPACK™ Drive lead product is also used in the performance derivatives.

Instead of the established PinFin baseplate, which offers the highest cooling performance, the Flat version uses a flat baseplate without any structure at all. This leads to a lower power output at lower cost. The Wave version fills the performance gap between the Flat and PinFin derivatives with a Ribbon Bond baseplate structure. 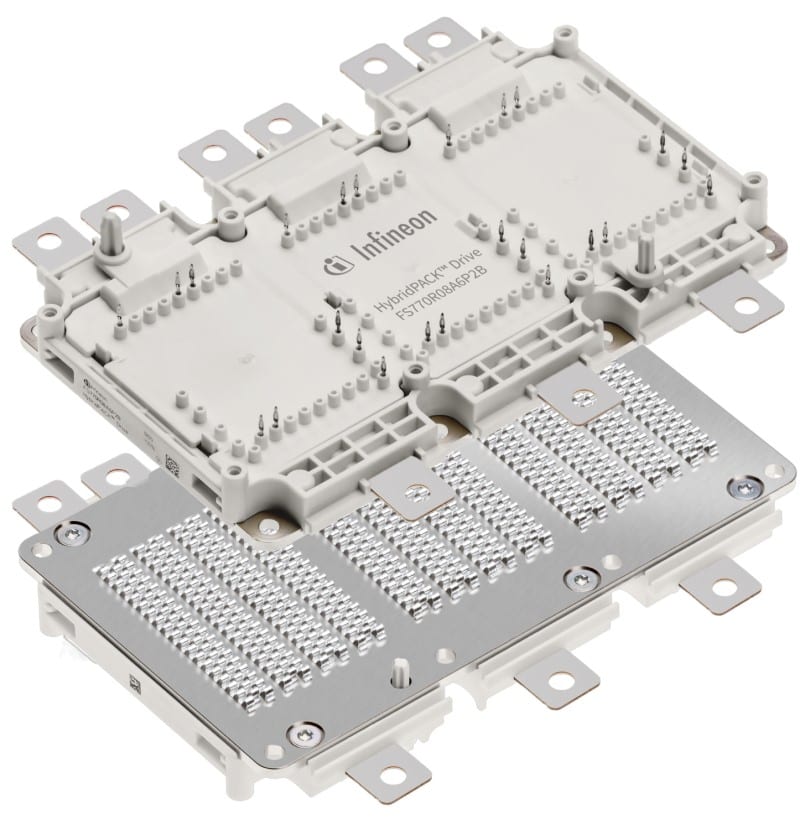 At the upper end of the portfolio, the new HybridPACK Drive Performance (FS950R08A6P2B) targets 200kW inverters. It is equipped with the same PinFin baseplate as the lead product. However, a dedicated ceramic material used instead of the known aluminum oxide improves cooling by more than 20 percent and thus enables higher current capabilities.

Just like the Flat and Wave versions, the Performance product comes with the EDT2 (Electric Drive Train) IGBT generation known from the lead product. All derivatives with this chipset benefit from similar electric behavior.

The fourth new device (FS380R12A6T4x) is an alternative version of the Performance module, targeting 150kW inverters. While it includes the same PinFin baseplate and performance ceramic, a different chipset of IGBT4 dies makes it the first derivative with a 1200V blocking voltage. This will be necessary in electric vehicles with a battery voltage of more than 700V for ultra-fast charging. For switching frequencies in the range of 8kHz, the IGBT4 thus represents a less expensive alternative to SiC modules.

The chip technology upgrade and the higher chip temperature operating capability lead to a 40 percent increase in the achievable performance from the same footprint compared to the existing HybridPACK™ DSC S1. In addition, this leads to a very high power density, which helps system developers to meet the tight space requirements in hybrid and plug-in hybrid vehicles.

As a compact half-bridge module, the HybridPACK DSC enables different inverter geometries and further motor integration. The on-chip current and temperature sensors contribute to an efficient and safe inverter operation.

At the PCIM 2019 tradeshow, Infineon is presenting innovative product-to-system solutions for applications that are set to power the world and shape the future. Infineon's demos are presented at booth #313 in hall 9 (Nuremberg, Germany, 7-9 May 2019).