The new SCALE-2 set consists of the 1SP0630V2M1R main driver, the 1SP0635D2S1R peripheral driver and the ISO6125R-33 power supply. The new units from Power Integrations (PI), are aimed at railway and other long-life applications and can accommodate systems that require paralleling to provide for greater power. Addressing the Needs of Rail Customers

Protection features including UVLO and short-circuit protection. There is also dynamic advanced active clamping, which protects against collector-emitter over-voltage and other issues. The units also feature a failure indicator.

The drivers feature standard conformal coating, and customers can specify that their units undergo burn-in for added reliability. Interconnection security is enhanced by the series’ improved connectors, which can facilitate fast release with no tooling. Fiber-optic interfaces are provided.

To enhance that goal, SCALE-2 devices use a specially designed application-specific IC (ASIC) chipset. The serves to reduce BOM and costs as well as to streamline manufacturing and improve reliability.

The 1SP0630S2M1R main driver can stand alone or be used with up to two peripheral divers such as the 1SP0635D2S1R. The peripheral driver, however, can only function in conjunction with the main driver.

The main driver itself is plug-and-play compatible, and PI states that “it is ready to operate immediately after mounting” with no extra design or adjustment effort on the part of the user. PI further affirms that the 1SP0630S2M1R is specially optimized for Mitsubishi’s CM-1200HC-66X half-bridge power modules. 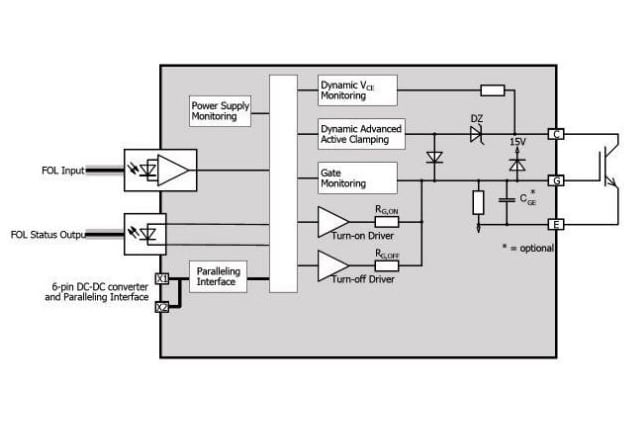 In the above diagram, DC input and paralleling capabilities are provided at the X1 and X2 interfaces. The input signal IN is presented to an “ST fiber optic Link” receiver connected directly to the gate drive unit. Operational status is communicated via FOL Status output.