Based on Efficient Power Conversion’s EGaN FETs, the non-isolated DC/DC power modules provide up to 300 watts of output power.

The MPC1100-54 from Monolithic Power Systems (MPS) is the first member of the new series. Measuring 27 by 18 by 6  mm, the new device features a power density of 1700 watts per cubic inch. 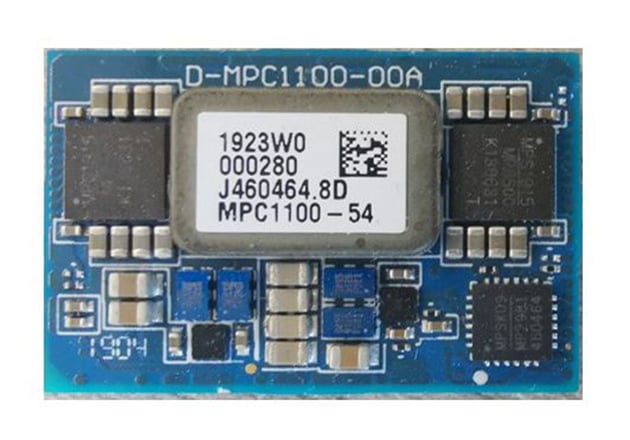 An advantage of 48V to 6V front-end is that the converting unit can be placed closer to the xPU/ASIC/GPU it animates, thus reducing the power distribution loss by four times when compared to current techniques. To this end, the MPC1100-54-0000 is the first in the new product family for the 48 volt datacenter environment that will utilize eGaN FETS from Efficient Power Conversion (EPC) Corporation. It is anticipated that this class will include devices with power levels of up to 1000 watts

The MPC1100-54-0000 communicates via a  PMBus/I2C interface, which makes it possible to monitor voltage, current and power at both input and output, as well as the module’s temperature

The module fields protections for

“The 48V to 6V module family offers an extremely powerful and versatile solution set for high-performance computing, high-density datacenters, and artificial intelligence systems migrating to the 48V power distribution architecture,” said Maurice Sciammas, Sr. VP Marketing & Sales, MPS. “With the EPC devices inside our modules, we can increase power density significantly to meet the demanding requirements of these advanced applications.”

“Advanced computing applications are putting higher demands on power converters, and silicon-based power conversion is not keeping pace,” said Alex Lidow, CEO of EPC. “We are delighted to work with MPS, a leader in this space, to implement GaN into their modules, allowing customers to increase the efficiency, shrink the size, and reduce system cost for 48V power conversion.”

MPS’s MPC1100-54-0000 makes use of two devices from EPC which are central to the function of the new module.

The two EPC devices can adjust the PWM to optimize the MPC1100-54-0000, ensuring that the module works at resonant frequency, where LLCs are most efficient.

The reader should be aware that on various sites, these chips are listed online as being both MPS and EPC devices

The image below is the functional block diagram of the power module. 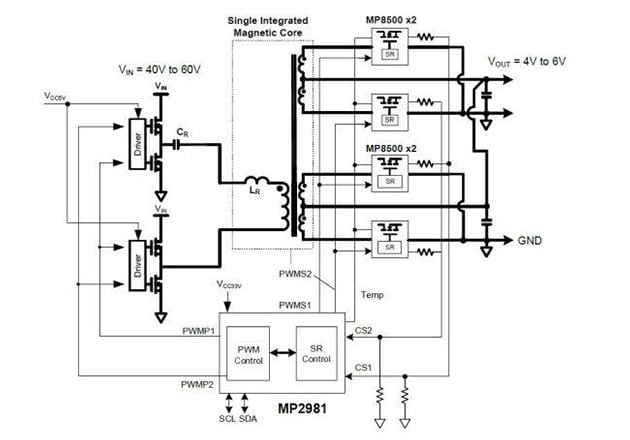 Note the MP2981 digital LLC controller in the lower center, and the four MP8500s on the upper right.

In the above diagram, the resonant tank is made up of LR, the transformer’s primary, and CR, which are L, L and C, respectively, of “LLC”. We describe LLC resonant tank converters in a previous article.  It can’t be mentioned often enough that although designs of this type look simple, successful implementation is difficult and requires specialized expertise.