Würth Elektronik eiSos and Analog Devices (ADI) will be exhibiting "Gleanergy" - the jointly-developed energy harvesting demo kit - at embedded world (Nuremberg, February 27 to March 1). It will be on display both at the Analog Devices booth (4A-629), as well as on the Würth Elektronik eiSos booth (3-247). This development platform opens up the possibility of using several sources of ambient energy to operate a wireless sensor node and as a means of extending battery life.

The "Gleanergy" demo kit - the name combines "glean" and "energy" - contains a thermoelectric generator, solar cells and an input for a piezoelectric generator. On the energy harvesting power board there is also a Li-ion rechargeable battery, a primary Li battery, ceramic capacitors and a super capacitor, as well as several switching controller ICs.

With the Gleanergy Kit, developers can test scenarios to run a battery-operated device with the aid of ambient energy sources for as long as possible without maintenance.

"We presume that the lifespan of the battery for an independent wireless sensor node can be extended up to 15 years if energy harvesting is used as the primary source of energy," explaind Lorandt Fölkel Field Application Engineer at Würth Elektronik eiSos. 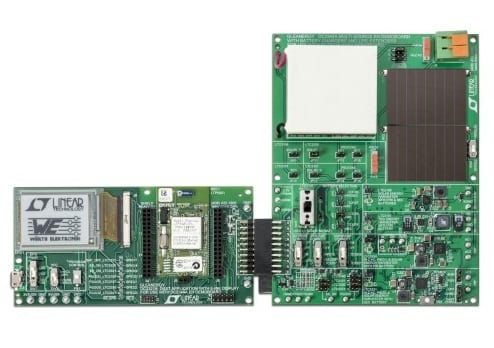 The application board contains an ARM Cortex-M3 processor, a SmartMesh network interface and an E-Ink display for indicating the battery charge level, etc. It also includes two coulomb counters for measuring the energy of the microprocessor. A wireless module in the form of a USB dongle allows data to be transmitted from the sensors connected to the demo kit onto a PC and displayed.

In many instances a battery will be required to "ride through" the periods of time when the ambient energy source is either not present or not sufficient to power the sensor.

This development platform demonstrates the ability to utilize any one or multiple ambient energy sources to power a wireless sensor node and extend the life of a primary or secondary battery. A convenient system is provided to enable users to customize the development platform for their specific use case and make a complete working prototype.

The complete package for the development of long-life sensor nodes is available here.