What is electric charge?

An intuitive way to understand the quantized nature of charge is to imagine an electrically neutral object as a box containing an equal number of protons (positive charges) and electrons (negative charges). Protons are fixed and cannot be taken out or added to the box. Since the number of protons and electrons is equal, the total sum of the electric charge inside the box is zero for electrically neutral objects. 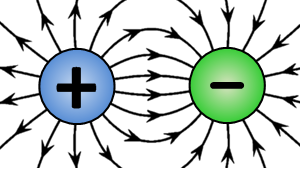 In order to make the object negatively charged, the only way to do so is to somehow add more electrons into the box. As electrons are indivisible particles, it is only possible to add an integer number of electrons - one cannot add half an electron into the box. As a result, the total charge of the object is N times the charge of a single electron, which equals -e·N, where N is an integer number. Similarly, in order to make an object positively charged, it is necessary to remove N electrons from the box and the resulting total charge of the object is e·N in this case.

Net charge of an object

where W is the energy stored, C is the capacitance and V is the voltage across the capacitor.