This article talks about the major improvements on Augmented Switching which resulted to significant loss reduction on overshoot voltage.

Energy Conversion equipment is getting lighter, safer and more reliable than ever before. This has been made possible by advances in Power Devices, specifically by adoption of state of the art Silicon IGBTs and SiC MOSFETs.

However, these advances have come with costly design tradeoffs. An example of such a tradeoff is efficiency vs. turn-off overshoot voltage.
To address these challenges, AgileSwitch’s Intelligent Gate Drivers now feature patented Augmented SwitchingTM Technology. This technique provides a fine-pitch control mechanism for system designers that are faced with the efficiency/overshoot challenge.

IGBT performance has made tremendous progress in the last two decades. This was achieved by introducing the Non-Punch Through (NPT) technology for lower losses and Vertical Gates for lower gate charge. However, during all this time, a critical piece of technology has remained a bulwark – the Gate Driver. The operation was simple, +Vge (Gate to Emitter) through the turn-on resistor and -Vge through the turn-off resistor.

A tectonic shift has begun to take place with the adoption of Silicon Carbide. SiC MOSFETs have larger di/dt & dv/dt compared to Si IGBTs. Therefore, the conventional technology became inefficient. Augmented Switching was introduced by AgileSwitch in 2016 to tackle this problem.

Efficient switching is achieved by effectively leveraging the miller effect of MOS devices. The technique transitions quickly to the miller plateau and is then followed by a rest period on the plateau to enable controlled switching without needing to slow the SiC device down with gate resistors. A comparison of Conventional Switching and Augmented Turn-Off can be seen in the charts below

Augmented Switching includes two-level Turn-On as well as two, or more, levels of Turn-Off. Further, there can be two different Turn-Off profiles – one for normal operation, and a different profile for Short-Circuit operation.

Augmented Turn-Off was first implemented in a discrete form and released in the EDEM3 – EconoDual Master 3 driver in March 2016. It was followed a year later by the launch of the 62EM1 – 62mm driver in February 2017.

The benefits of Augmented Switching have been shown in head to head comparisons with Conventional Switching using commercially available Gate Drivers and SiC Power Modules.

The power module characteristics are:

The AgileSwitch Gate Driver with Augmented Switching was optimized to deliver a balance between overshoot voltage and switching losses.

Augmented Switching resulted in a 23% reduction in switching losses for the overshoot voltage as compared to the conventional driver. A summary is tabulated in Table 1.

A short circuit condition is especially dangerous due to the high current in the device. When the device turns off in a short circuit condition, high voltage and high current are both present for a finite period of time, resulting in stress in the device. IGBTs were rated to endure this stress for up to 10us, whereas the SiC MOSFETs have a much narrower window. The resulting di/dt couples with the stray inductance in the system power loop to create a large overshoot voltage. 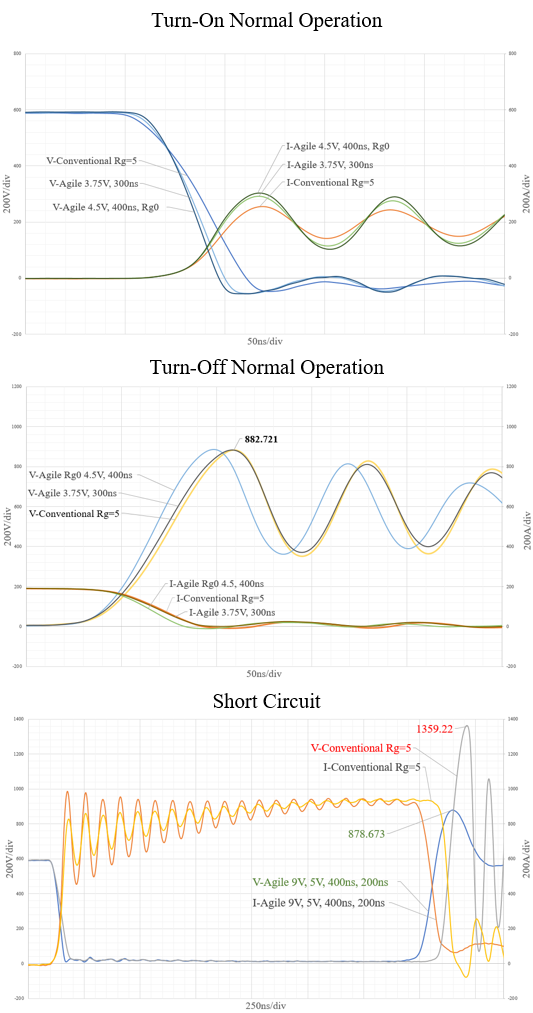 Advanced techniques are implemented in Augmented Switching to improve the short circuit detection time. The use of Augmented Switching limits this overshoot voltage to 37% of the overshoot that would be observed if using a conventional driver (63% reduction). Results are tabulated in Table 2.

Each of the building blocks on the AgileSwitch product roadmap address key design considerations experienced by customers. These issues are explored in detail in the next section. 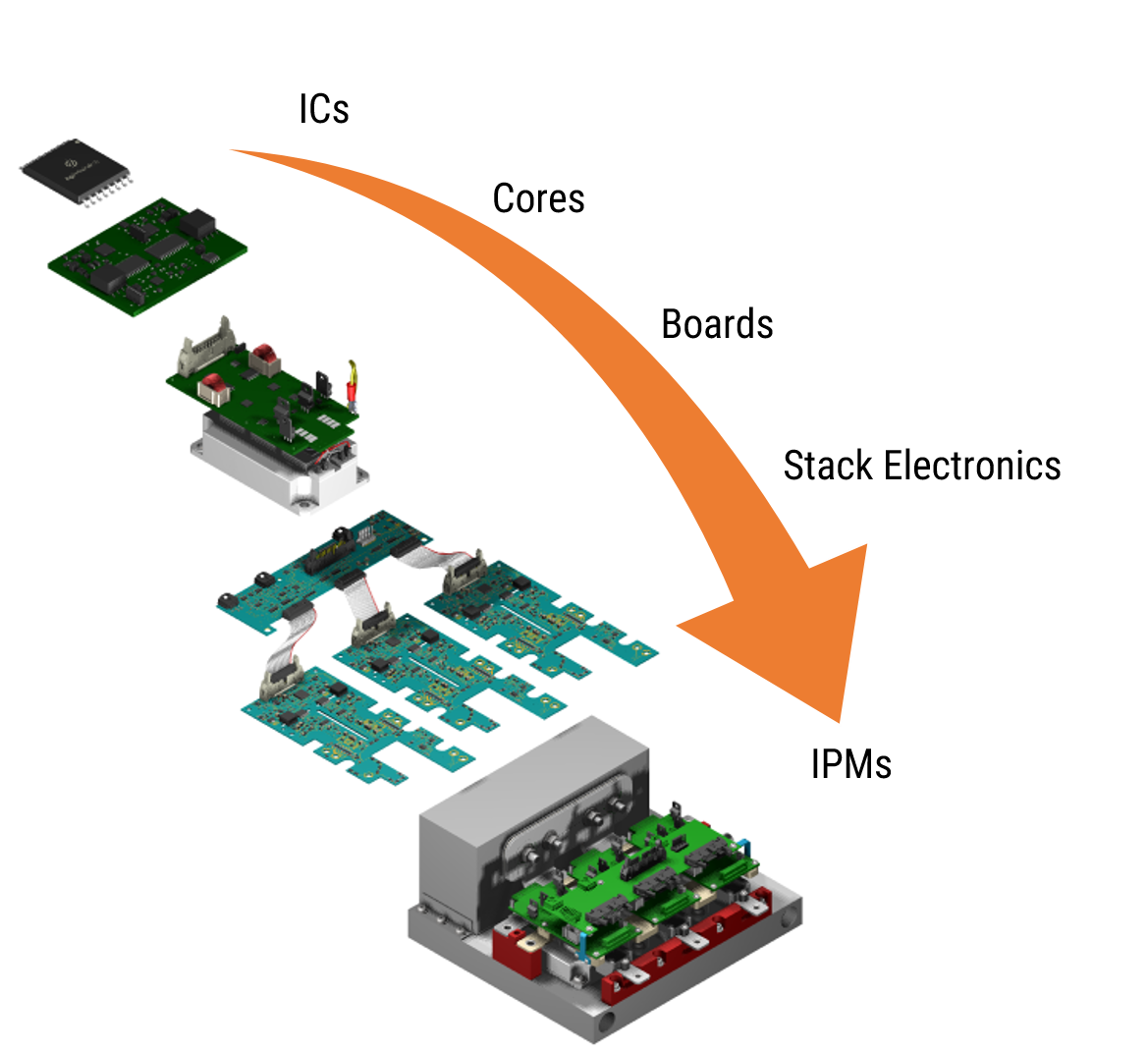 Is Augmented Switching for me? 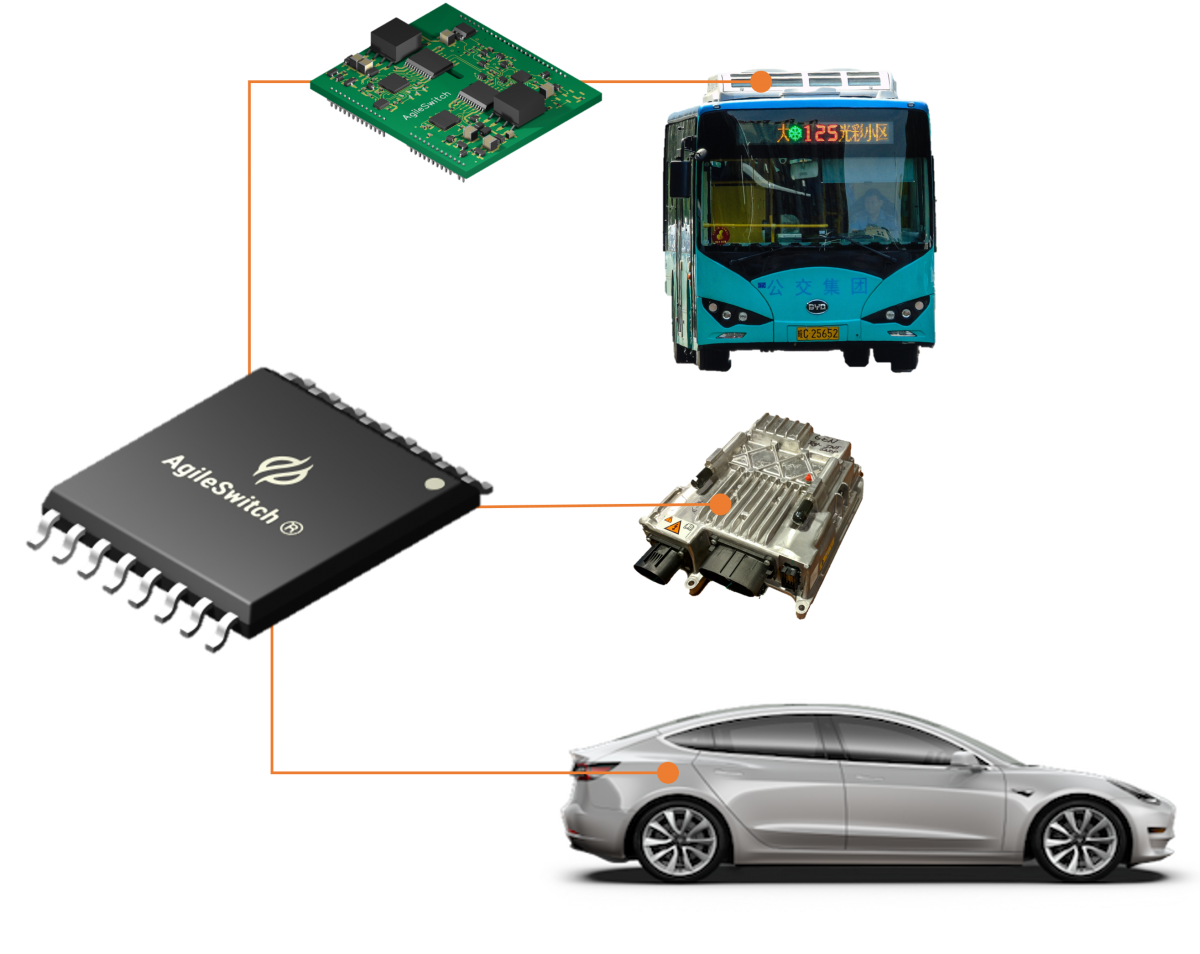 Due to increasing awareness of the effects of global warming, the Transportation industry, particularly consumer vehicles are moving quickly toward electrification. The biggest challenges for consumer EVs today are addressed by Augmented Switching:

Traction inverters and auxiliary power units (APU) on mass transit vehicles present their own set of unique design challenges and interfering factors. Augmented Switching is able to address many of these design requirements:

Storage of energy generated through renewable methods adds an additional conversion step due to the inclusion of the battery. Improving efficiency becomes critical to offset this additional step:

Augmented Switching solves the major challenges faced by users in the noted application areas. It is presented as a viable alternative to conventional switching techniques. Higher efficiency is achieved through a reduction in switching losses. Size reduction of Passive Filter Components is achieved by reduction in Vds, Vgs ringing and turn-off overshoot voltage suppression.  Safe operation is demonstrated through a fast and safe short circuit response.   With Augmented Switching techniques, designers are now able to realize the full set of benefits available from SiC MOSFET devices.

Cliff Robins is the European Director of Business Development at AgileSwitch. He is based in the UK and serves customers across the globe including Europe, Russia, and the CIS countries. Has over 25+ years in power electronics sales for global suppliers and manufacturers. Prior to 2012, Cliff served as a Sales and Marketing Director for a Power Semiconductor company.

Adam Fender is a Technical Product Manager at AgileSwitch. He received his Bachelor’s Degree in Mechanical Engineering from Temple University in Philadelphia, PA. Adam’s responsibilities include thermal and mechanical analysis and design of power stacks, project management, and product testing.