An Application Example for xEV applications. Since the benefits of SiC power semiconductors for electric powertrains are proven, SiC power semiconductors are quickly attracting attention as a next-generation technology. Higher efficiency of SiC MOSFETs compared to Si IGBTs lead to longer driving distances or smaller high voltage batteries, bringing benefits to the consumer.

Since ROHM obtained qualification under the AEC-Q101 automotive standard for SiC in 2012, the company has built a track record for SiC MOSFETs, primarily in automotive chargers and DC/DC converters. ROHM presented the 1st trench-based SiC MOSFET already in 2015. The experience in process and field design helped to create the newest generation with a 40% reduced Rdson compared to the previous trench-based generation. 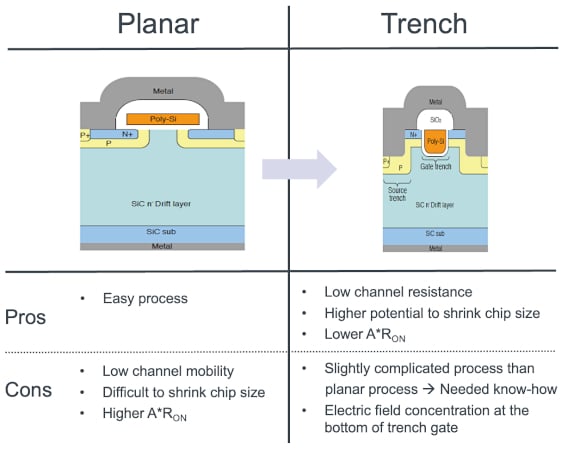 ROHM’s latest 4th Gen SiC MOSFETs deliver low ON-resistance per unit area through advanced technology utilizing a trench gate structure. At the same time parasitic capacitance, the source of switching loss, has been reduced. This translates to a 40% performance improvement in drift layer resistance and 50% lower switching loss compared with 3rd Gen SiC MOSFETs. Switching loss, in particular, accounts for more than 70% of the losses generated by SiC MOSFETs in traction inverter applications, so minimizing this can contribute to significantly improved efficiency. [Tamegai]

Incidentally, superior response enables higher frequency operation, leading to smaller heatsink, capacitors, and other components used to smooth out the waveforms of voltage and current. And as the size of these components greatly affects the size of the inverter, they also contribute to greater miniaturization. SiC’s high temperature resistance is also advantageous to downsizing. Compared to silicon power semiconductors, SiC enables stable performance at temperature exceeding 100°C (actually up to 175°C but the package and wiring cannot withstand this), allowing the cooling structure to be simplified by changing from water to air cooling and reducing the size of the heat sinks. [Tamegai] 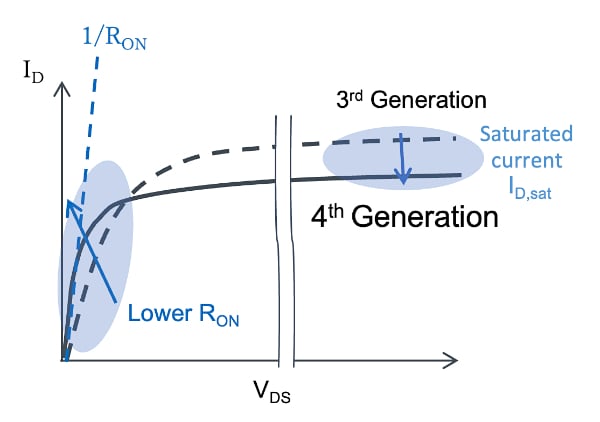 1. A Short circuit when no current was flowing before a.k.a. Short Circuit Type 1

2. A failure under load a.k.a. Short Circuit Type 2

The device under test used for this investigation was a power module for e-powertrain applications equipped with ROHM’s newest generation of SiC trench MOSFETs.

Device Under Test and Test Setup

In ROHMs Power lab in Willich/Germany short circuit tests with 4th Gen were performed and presented at [PCIM 22]. A Power module from Semikron was used and a Gate driver testboard based on ROHMs Gate Driver BM6112 (20A output DESAT detection and Advanced Soft turn off) was developed to perform the tests.

The device under test (eMPack module from Semikron) was equipped with 4th Gen SiC MOSFET dies. It includes six switches (three half bridges) and was specifically developed for automotive traction inverters [4]. Blocking voltage of the semiconductors is 1200 V, the module’s rated current is 780 A. A very low stray inductance has been realized through an innovative internal assembly and connection method to the DC-link capacitor. [PCIM 22]

To detect a Short Circuit the short circuit desaturation detection (DESAT) method was used. After DESAT is triggered, the so called Advanced Soft Turn Off (ASTO) is used to turn off the device quickly and safely. 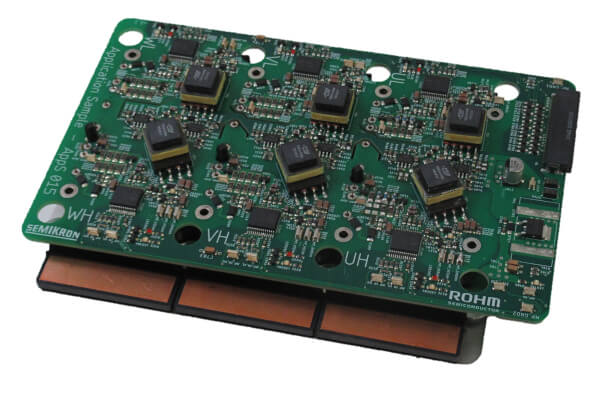 Before we present our results, we like to explain the Gate driver settings. Even if ROHMs 4th generation SiC MOSFETs are designed to withstand higher short circuit withstand times, we defined our goal based on market typical requirements. The market trend for DESAT detection circuits is to turn off a short circuit within 1.5-2µs.

There are in general two gate driver design criteria which play a role in managing the short circuit time:

Goal: tradeoff between turn off time and overvoltage due to parasitic L * di/dt

Parameters: ASTO feature: R_PROOUT1 for ~160ns after DESAT is detected and R_PROOUT for the rest of the turn of slope (pic. 4, right)

We adjusted the gate driver board (picture 3 and 4) in a way that we first evaluated the DESAT with a hard short circuit (like type 1). We tested different soft turn off scenarios:

With ASTO1 design, the shortest tSC was archived. However, the peak voltage upon turn off is with 1156 V which provides a low safety margin for a 1200V rated power device. 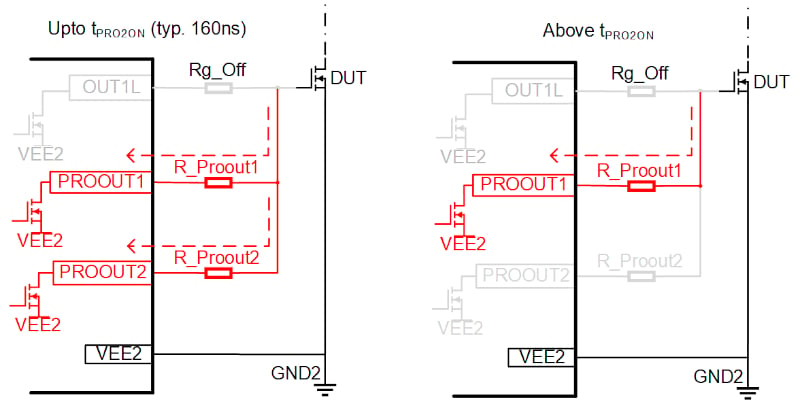 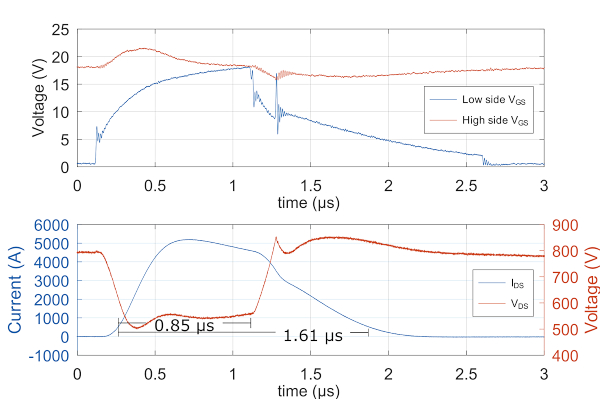 With STO and ASTO2 the overvoltage can be significantly reduced to an overshoot of less than 60V and thus a very good safety margin. The SC time with conventional soft turn off (STO) was around 2us with an overvoltage of 56V. ASTO2 achieve a shorter SC time (1.6us) and similar overvoltage levels as STO. Using ASTO2 is clearly a benefit since neither of SC time and overvoltage are compromised, henceforth will be used for further measurements shown in this article. 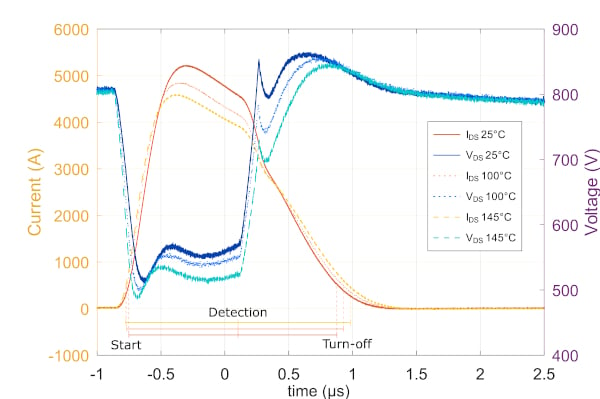 Second step was the evaluation of temperature’s influence for both, SC type 1 and 2 using ASTO2. 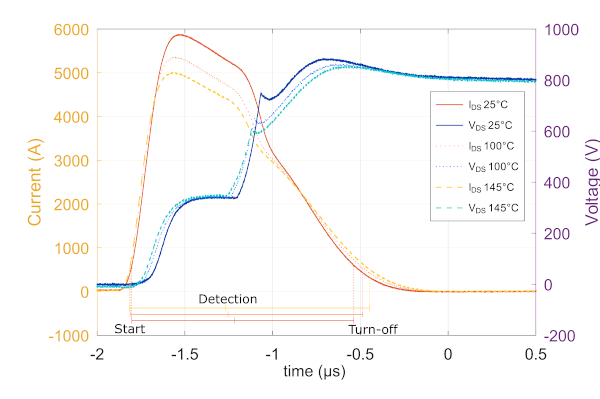 Targets of the investigation:

Influence of temperature on

ROHMs newest SiC MOSFETs generation performs very well in a short circuit. The short circuit current of the 1200V MOSFET is round six times of the rated current in the device under test. A target SC time less than 2us was achievable and with an optimized Gate driver design (DESAT and ASTO) the overvoltage upon turn off was also less than 60V. With an optimized Gate Driver design (using DESAT and ASTO) it was possible to switch the short circuit off within 1.6µs by getting less then 60V overvoltage peak.

The combination of ROHMs 4th Gen SiC MOSFET in Semikron’s eMPack and ROHMs Gate Driver BM6112 are developed for automotive power train applications and bring xEV designs on the highest level of performance and robustness.