Discrete devices such as the TO-247 are fine as a first step towards integrating silicon carbide into various applications, but for more powerful and sophisticated designs, the integration capabilities of power modules make them the first choice. But which packages are suitable for fast switching silicon carbide devices?

Silicon carbide can be the right semiconductor to choose when conventional silicon devices reach their limits in terms of power losses and switching frequency. Up to 30 to 40kHz, the latest-generation silicon IGBTs and diodes combined with new topologies such as multilevel configuration provide the best cost-performance ratio. Hybrid silicon carbide, combining a high-speed silicon IGBT and a silicon carbide Schottky free-wheeling diode, is also a great option, reducing the power losses by up to 50% compared to silicon-only solutions. 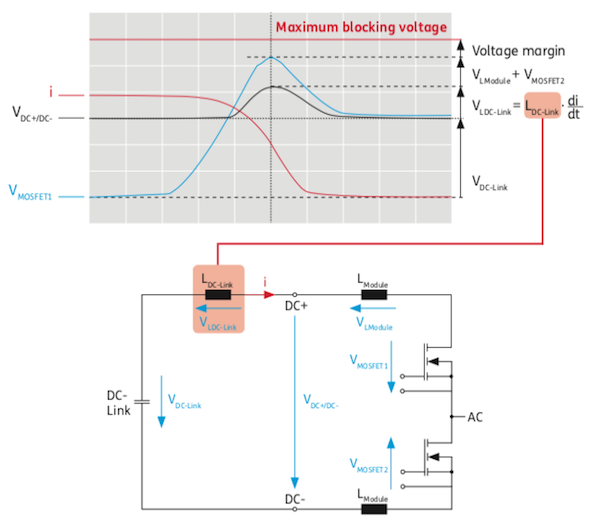 Figure 1: Module and system inductance and their influence on transient overvoltage during MOSFET turn-OFF

Above 40kHz, SiC MOSFETs can be the best choice but lead to challenges for the power module and system design. Fast switching incurs steep current slopes and high di/dt values. The module’s and system’s parasitic inductances, LModule and LDC-Link, cause voltage drops due to this di/dt, resulting in voltage overshoot across the chips.

If the current slope is too high, this overvoltage might exceed the maximum blocking voltage, e.g. 1200V, of the SiC device. Decreasing the switching speed or the DC link voltage VDC-link will reduce the overvoltage but compromise the SiC power module’s performance. A module and system design focused on low commutation inductance are therefore essential.

The module’s commutation inductance is mainly provided by the DC bus terminals with 12 to 18nH, depending on the power module design. The DBC design, i.e. DBC tracks and wire bonds, contribute another 1 to 6nH. The degree of optimization freedom depends greatly on the overall power module design.

The SEMITRANS 3 module includes optimized DC bus terminals. Thanks to parallel guidance of the terminals internally, the commutation inductance of the complete package is 15nH.

This makes the SEMITRANS 3 very good for medium- and high-power silicon carbide designs using medium switching speeds and frequencies up to approx. 25 kHz. Full SiC half-bridge topologies are available with rated currents of 350A and 500A, with and without a SiC Schottky free-wheeling 1200V diode. 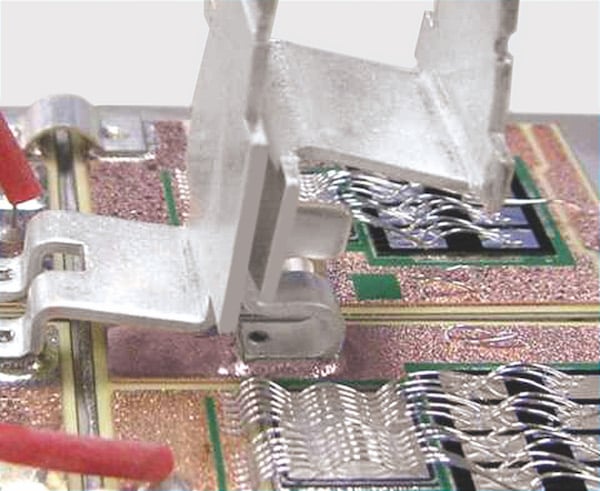 Another example is the MiniSKiiP, a baseplate-less power module using Semikron’s SPRiNG system to connect the power and auxiliary terminals to the PCB. Having spring positions fixed by the housing design, commutation inductance can only be improved within the limits of the DBC design. The resulting commutation inductance is around 20nH for 6-pack power modules, which allows full SiC modules for the low- and medium-power range. In full SiC MiniSKiiP is available with 25A to 90A in 6-pack topology for 1200V and with 50A, 100A, and 150A with hybrid SiC chipsets.

SEMITOP E2 is the baseplate-less module that allows full optimization. With its pin-grid structure on the top of the housing, the press-fit pins can be freely distributed over the complete footprint. Extensive simulations helped to create a half-bridge design with only 6nH commutation inductance. The module is equipped with 6 SiC MOSFETs in parallel, resulting in an Rds,on of 7.5mOhm at 25°C.

Thanks to the design, the AC and DC sides are separated on opposite edges of the module, so the DC link PCB can be designed to be low-inductance as well. This means DC+ and DC– can remain paralleled within the PCB for a maximum distance, reducing the commutation loop. 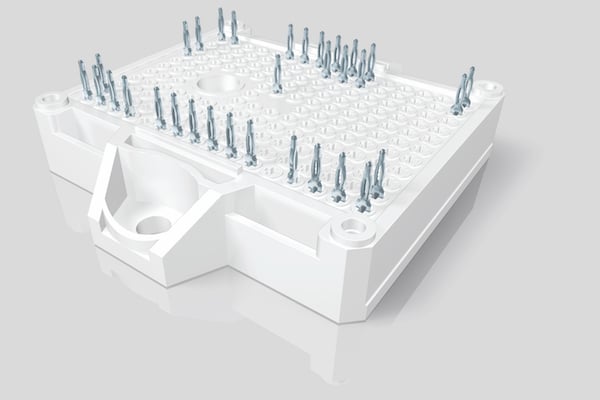 The advantage of optimized commutation inductance is a safe operating area that supports switching speeds of over 50kV/μs at 600V DC link voltage, including a sufficient margin between the blocking voltage of the SiC MOSFET and the overvoltage measured across the MOSFET chips. Figure 4 shows the switching losses versus the drain current with an external gate resistor of 0.5Ω in addition to the internal gate resistor of 0.5Ω.

Figure 4: Switching losses of the SEMITOP E2 SiC versus the drain current ID

The overall thermal performance of the power module is also important. The power density of silicon carbide chips is higher than that of silicon devices. SiC MOSFETs demonstrate significantly lower switching losses in general and especially lower voltage drops under partial load than silicon IGBTs with the same nominal current. This produces smaller chip areas under nominal load, with an undesirable higher thermal resistance from chip to baseplate or heatsink (Rth(j-c)resp. Rth(j-s)).

Yet the chip area might then not be sufficient for overload conditions. Due to the usually positive temperature coefficient of SiC devices, the static or forward losses gain importance and increase the overall losses during an overload. Adding additional SiC MOSFET chips to reduce the RDS,on would increase the overload capability, but also the cost of the power module. SiC is still expensive and only the minimum SiC chip area required should be used. The solution lies in improving the module’s thermal resistance.

The standard today is aluminum oxide, providing a good trade-off between thermal/mechanical behavior and cost. AlN has 9 times the thermal conductivity of Al2O3 but is less mechanically stable. This weakness must be offset with increased thickness, which compromises thermal improvement.

Table 2 shows a case study for the SEMITRANS 3 full SiC half-bridge power module. Available with Al2O3 and AlN substrates, the benefit of a substrate with increased thermal performance is obvious. The Al2O3 version uses 12 chips per switch at 100% module cost to achieve a continuous drain current of 431A. If the substrate is changed to AlN and the chips reduced to 8, the continuous drain current remains in the same range while the cost of the power module is reduced to 75%.

Replacing time-consuming production processes with TO device-based power designs is only possible using silicon or silicon carbide power modules. The specific features of SiC require optimization of the commutation inductance and thermal performance. As a result, the cost-performance ratio can be improved and the advantages of SiC fully utilized to the application’s benefit.

Stefan Hauser joined SEMIKRON in 2011 as a product manager. He then changed to his current position as senior manager of product marketing for the complete range of power modules in 2015. Besides the IGBT and thyristor/diode-based power module market, he also focuses on silicon carbide power module strategy.