This article discusses the innovative design approach for Pulse's EP13 plus platform with the ability to provide more power with similar footprint.

There are a wide variety of applications, including Power over Ethernet (PoE and PoE+), datacom/telecom and industrial, operating from a 12v, 24v or 48v input, that require an isolated switch mode power supply solution to convert the available input voltage to the required regulated output voltage and current. The isolation and power conversion element in these supplies is typically a surface mount (SMT) switch mode transformer. With power levels up to 40W, the typical power supply topologies used are the continuous mode flyback or the active clamp forward.

For these power levels and topologies the best transformer platform, in terms of power efficiency, board area and cost, is the EP13. This platform has become the de facto industry standard. However, as power efficiency becomes more important and system power requirements increase, there are typically two limiting factors when using the standard EP13 platform.

The first limitation is the core cross-sectional area (Ae), which dictates the number of primary winding turns required to limit the magnetic flux density (B) in a given power supply application. A simplified description of the effect the Ae has on transformer design can be summarized by stating that the smaller cross-sectional area available in the core, the greater the number of turns required to limit the magnetic flux to the required level, which directly correlates to higher winding resistance (DCR) and proportionately higher power losses.

The second limitation is that surface mount transformers must have good coplanarity (0.127mm or less) to ensure that the leads of the platform are properly soldered to the PCB. This specification limits the number and gauge of winding wires that can be terminated without damaging the lead or causing solder bridges to adjacent leads. Limiting the wire size and number of wires causes higher resistance and additional power losses. An innovative SMT transformer solution using the industry-standard EP13 footprint, but utilizing a modified core to increase the cross-sectional area and a new lead shape to increase the number of windings that can be terminated, is now available. The result is a higher power handling transformer with an industry-standard footprint.

The most effective way of demonstrating the advantages of this new platform is by comparing the designs for two different topologies. 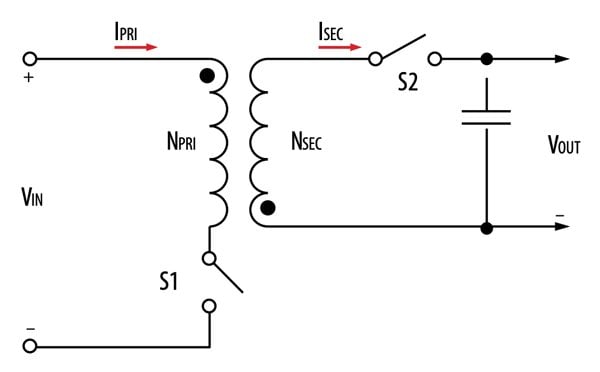 The continuous mode (CM) flyback is most often employed for lower power DC/DC applications (<60W) and offers the advantages of a low part count and relatively low solution cost, but the disadvantages of higher peak currents and output voltage ripple. A simplified flyback schematic is shown in Figure 1 and the transformer current waveforms are shown in Figure 2.

Figure 2: Appendix A reviews the basic operation of the transformer in a flyback topology and details the specific design equations required. A more detailed analysis of the flyback circuit is available.

For purposes of this comparison, flyback transformers were designed for a 33-57v input and 5v output at six different power levels (20W to 45W) on both the standard EP13 and EP13Plus platforms. The inductance requirements and peak and rms currents are shown in Figure 3. The power loss within the transformers was compared and is shown in Figure 4. 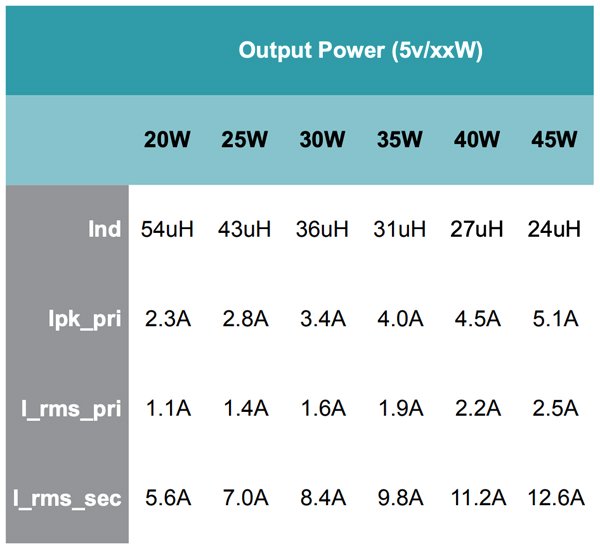 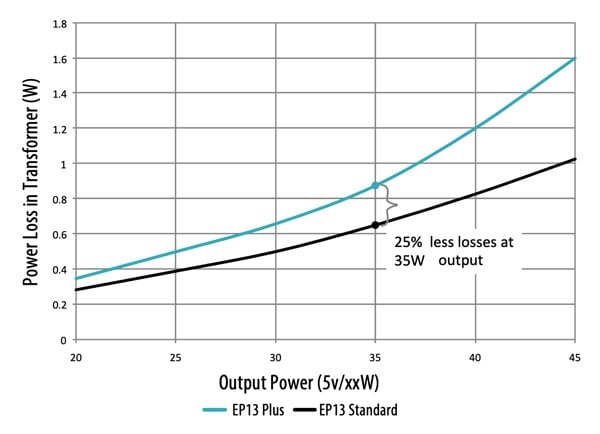 Because the EP13Plus has a larger cross-sectional area, fewer turns are required and this, along with the modified lead, allows for lower winding resistance. As can be seen Figure 3, as the output power increases, the power loss difference between the standard EP13 and EP13Plus widens. The output power a transformer can deliver, for a given temperature rise, is directly proportional to the power loss within the transformer. So a 25% reduction in transformer loss with the new EP13Plus represents a proportional 25% increase in output power capability. As an example, for a 45°C rise, the EP13, in flyback mode, can deliver 25W, but the EP13Plus can deliver 32W of power.

The active clamp forward is often implemented in applications between 20-200W and offers the advantage of excellent efficiency due to facilitation of zero volt switching, lower drain voltages, and low output inductance requirements, but comes at the cost of added complexity and higher component count. A simplified active clamp forward schematic is shown in Figure 5 and the transformer current waveforms are shown in Figure 6. The basic operation of the transformer in a forward topology along with the relevant design equations are detailed in Appendix B. 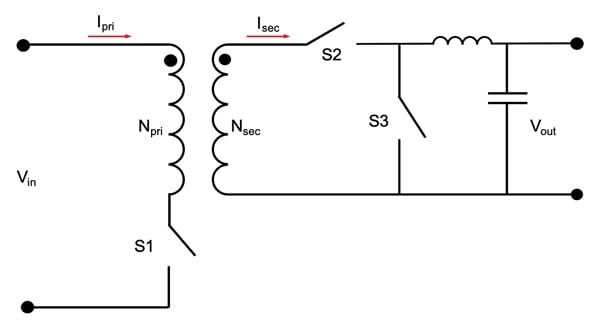 For purposes of the comparison, forward transformers were designed for a 33-57v input and 5v output at six different power levels (20W to 70W) on both the standard EP13 and EP13Plus platforms. The rms currents for these designs are shown in the Figure 7. The power loss within the transformers was compared and is shown in Figure 8. 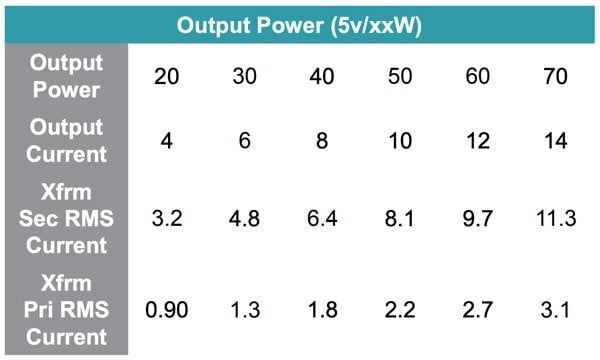 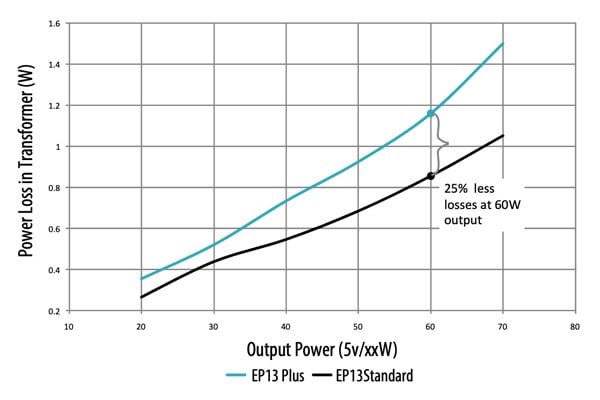 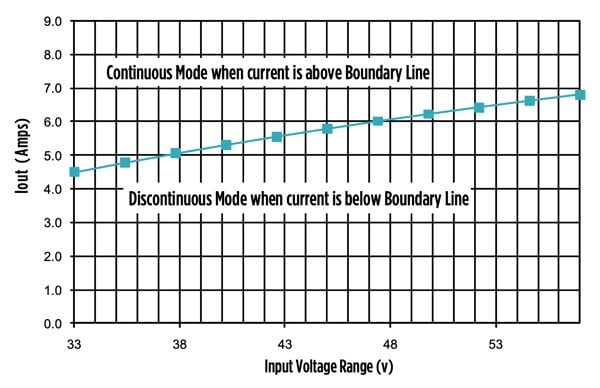 The innovative design approach for the EP13Plus platform has a demonstrated ability to provide 25% more power handling in the same footprint and mechanical size as the industry-standard EP13. This offers designers the flexibility to increase power density or to lower thermal loads in existing designs. To assist power supply designers in incorporating this new platform, a catalog series of EP13Plus transformers for continuous mode flyback and active clamp forward topologies is available. These 12 designs cover both 9-57v and 33-57v input ranges and can provide six different output voltages from 3.3v to 24v.

The basic operation of the flyback topology can be broken into two operating states, the on-time and the off-time. The on-time is when S1 (input side switch) is closed and the input voltage is applied to the transformer causing the current on the primary to ramp upward in proportion to the transformer magnetizing inductance. During this time, S2 (output side switch) remains open (either through the diode action or as a controlled switch) so the transformer must store the input energy in its magnetic field as the secondary current path is blocked. The off-time begins when switch S1 is opened and switch S2 is closed creating a current path to the output. During this time the stored energy in the transformer is transferred to the secondary winding and discharged to the output. This cycle is repeated at the operating frequency (FreqkHz) or cycle time (T). If during the off-time the secondary current reaches zero, the power supply is said to be operating in discontinuous mode. If the current remains above zero, the power supply is said to be in continuous mode.

For the purposes of the above flyback transformer comparison we set two circuit operating points. First, we targeted the maximum duty cycle (ie: on_time/cycle_time or ton/T) to be <0.45 which determines the turns ratio as follows:

Second, as it is not possible to have a supply that will operate in continuous mode across

the entire range of output power, we will target a minimum output current, Ioutmin, at which the supply will transition between continuous and discontinuous mode. As can be seen in Figure 9, the transition point will vary with input voltage. For the purposes of this comparison we selected an output current of 50% of full load at minimum input voltage. This current determines the required primary inductance as follows:

Finally, in order to complete the transformer designs, we need to know the peak primary current and heating or rms currents in the transformer which can be found using the following equations:

With the above information, the first step in the flyback transformer design was to determine how many primary turns are required in order to prevent core saturation, represented by the equation:

A good rule of thumb for maximum flux density (Bpk_gauss) is 2800 G, but it will vary somewhat depending on the ferrite core material selected. With the turns ratio known, the number of secondary turns was found and then the strands and gauge of wires that can fit within the core window and be terminated on the pins was determined. Because the EP13Plus has a larger core area it requires less turns to allow for the same Lpri and Ipk_pri, and the lead arrangement allows for larger wires, reducing the winding resistance.

The basic operation of this topology can be broken into two operating states. During the first state, on-time, switch S1 (input side switch) is closed and the input voltage is applied to the transformer. Also during this time switch S2 is closed and S3 is opened, allowing the input current to be transferred, via the magnetic field of the transformer, directly to secondary winding and through to the load. The secondary current will be a function of the primary current and the turns ratio of the transformer. During the second state, off-time, switch S1 and S2 are opened effectively disconnecting the transformer from the circuit. Switch S3 is closed, allowing current to continue to flow to the load from the stored energy in the output inductor. This cycle is repeated at the operating frequency or cycle time. The duty cycle (D) is the ratio of on-time over cycle time (ton/T). For the purposes of this comparison we set the duty cycle (Dmax) to <0.65 which determine the turns ratio per the following equation:

As there is no energy storage required in a forward transformer, the limiting design factor is power loss and temperature rise. It is, therefore, necessary to optimize the combination of core losses and copper losses. The core losses are caused by the volt-usec applied to the transformer primary and are minimized by increasing the number of primary turns. The copper losses are caused by rms currents and are minimized by reducing the number of turns. The general equations required for the forward transformer design are:

Unlike the CM flyback, the current waveforms in a forward transformer have considerable AC content. It is, therefore, necessary to analyze the AC copper losses as well as the DC copper losses. Although the equations and explanation of AC proximity losses are not covered in this overview, they were accounted for in the designs as presented. In general, AC copper losses are minimized by reducing the height (thickness of wire and number of layers) as much as possible and interleaving the primary and secondary windings. A good rule of thumb is to attempt to balance the overall copper losses and the core losses. Ultimately, however, one is looking to minimize the overall losses. Again, because the EP13Plus has a larger core area, the turns can be reduced without creating additional core losses. This reduction, in turn, allows for lower DC and AC copper losses.

John Gallagher is an experienced Field Application Engineer at Pulse with a demonstrated history of working in the electrical and electronic manufacturing industry. Skilled in Hardware Architecture, Circuit Design, Mixed Signal, Electronics, and Engineering Management. Strong professional with a B.Eng focused in Electrical Engineering from Dalhousie University.