For standard low voltage (≤690Vac) motor drives the IGBT based voltage source 2 level topology dominates the landscape. However at higher voltages (≥2400Vac), the situation changes and there is a plethora of different topologies, each one with unique technical and/or economic advantages. One of these topologies, often referred to as cascade, or Cascade H Bridge (CHB), has increased in popularity in recent years. This article will explain the basic operating principles of the CHB drive and showcase some new power modules matched to this type of converter.

For Medium Voltage Drives (MVD’s), there are several competing technologies: three-level Neutral Point Clamp (NPC) type 1 using high voltage power modules (1), current source designs using reverse blocking semiconductors (2), five-level T type (3), and Modular Multi-Level (M2L) (4), to name some of the more common types available today in the market. The history of the CHB topology is that it was invented in the early 1970’s but first commercially brought to the market by Robicon USA (now owned by Siemens) in the early 1980’s. In recent years numerous companies have introduced CHB based MVD’s. The overall topology of one phase is shown in Figure 1 and a more detailed schematic for an individual cell in Figure 2.

The key to the cascade topology is a multiphase isolation transformer, see Figure 1, here shown with a medium voltage primary and 5 isolated secondary windings, in this example each rated at 750 Vac. Each transformer secondary powers a single cell and the 5 cells are “daisy chained” together in series to make a complete phase. Two other phases are used to build a complete three-phase drive with a total of 15 isolated secondary windings. See Figure 4. 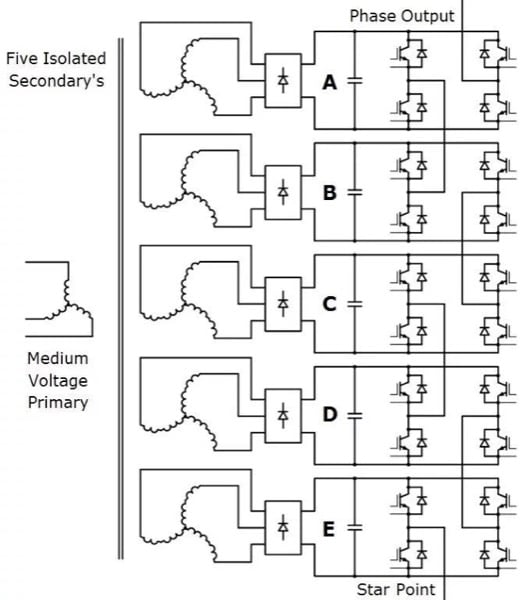 Figure 1: Overall schematic of one phase of a 5 cell per phase CHB converter.

The detailed schematic of a typical cell is shown in Figure 2. It comprises of:

Figure 3a shows a typical converter with a transformer and 18 cells. Figure 3b shows an individual cell. 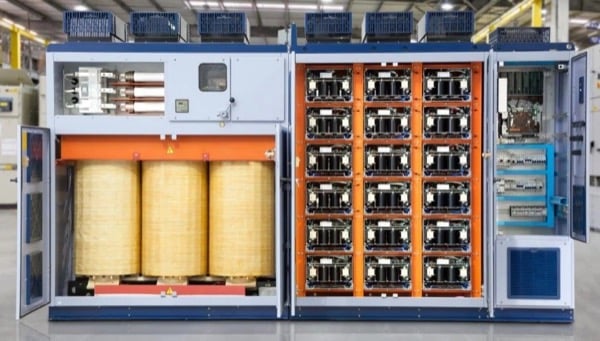 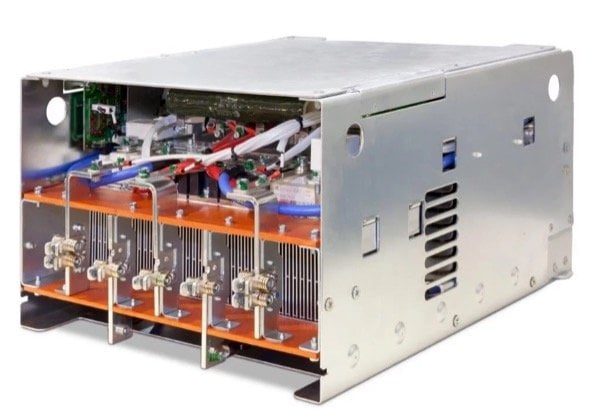 Figure 3b: Air-cooled cell showing rectifier modules (black) in the center and 62mm modules(white) on the right and left. 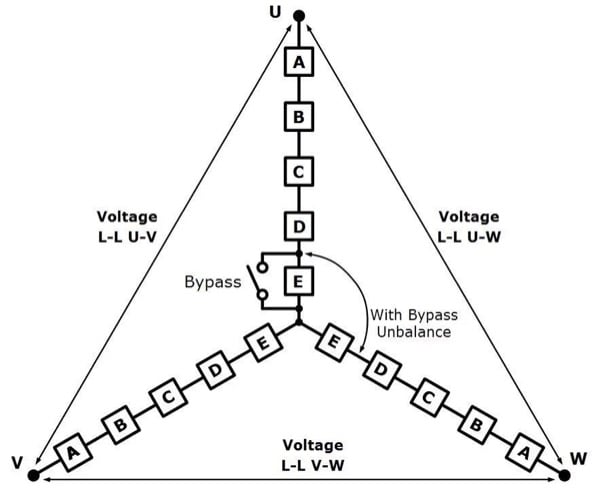 Figure 4: Three phase system and showing unbalance with one phase being bypassed.

The H bridge can be switched to generate three different voltages at the output, for a positive voltage, S1 and S4, see Figure 2, are turned on, for a negative voltage S2 and S3 are turned on. For a zero voltage state, either S1 and S2 or S3 and S4 can be turned on.

In the simplest mode of operation the output sine wave can be built up by, for example, firing each cell on in sequence with Cell E first, then D all the way up to A with each step increasing the output voltage by ≈1000 VDC and PWM switching used at each level to shape the waveform to a sine wave. This is referred to as a level shift modulation, but it has the drawback that the power semiconductors in each cell do not see equal losses and the transformer windings do not draw equal current which does not minimize the input harmonic currents.

Another method, referred to as angle or phase shift modulation, is shown in Figure 5, and does create equal losses across the cells. The pattern uses a standard common sine wave reference for all cells, but phase shifts the PWM reference by a factor of the number of cells divided by 180°, in this case with 5 cells, 36°. This staggers the PWM patters and prevents two cells switching at the same time, it also shares the zero voltage states equally between the two possible choices. Figure 5 shows the phase shift between cells A and D at 3 x 36 = 108°.  Now as with regular drives there are numerous nuances of PWM pattern generation, such a space vector modulation, all with targeted technical advantages. 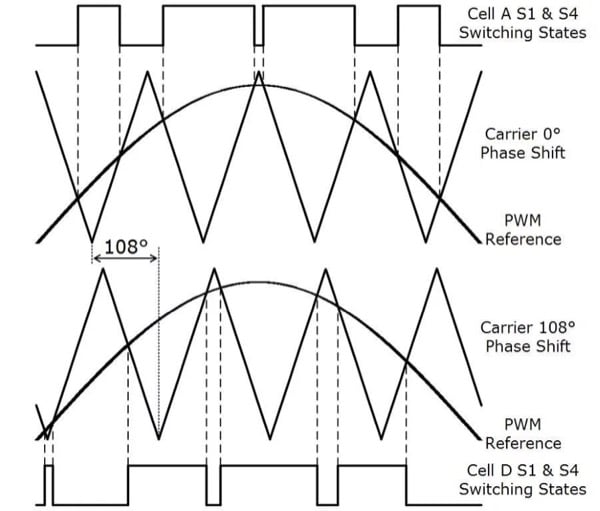 The losses are dependent on the type of switching pattern used. However, a simple approximation to the losses can be made using an online tool such as the Infineon’s Iposim and estimating the losses assuming a single-phase operation. A rough “rule of thumb” is that at a 60Hz fundamental output frequency, 1 kHz switching frequency on an air-cooled heat sink the IGBT modules should be capable of an RMS output of 0.6 - 0.7 x DC current rating of the module. So for a 300A module, the RMS current can be ≈ 180 – 210 ARMS. 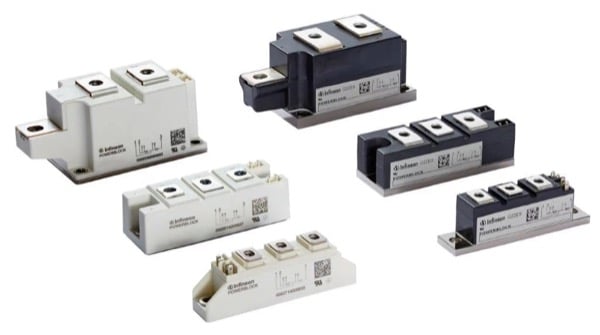 For the H bridge, 1700V IGBT’s devices are often selected as this allows a higher cell voltage, up to a maximum of ≈1200Vdc enabling fewer cells in series. At the same time, 1700V silicon and peripheral components such as rectifiers and bus capacitors are readily available due to their use in 690Vac rated drives. Infineon has increased its portfolio of IGBT modules in industry-standard packages to match the requirements of CHB drives as shown in Figure 7. Dual modules in the 62mm or EconoDUAL™3 packages are available up to 600A and complete H bridges, for a more compact design, are available in the EconoDUAL™3 and Econo 3 packages. The later suitable for PCB based designs using press-fit technology. 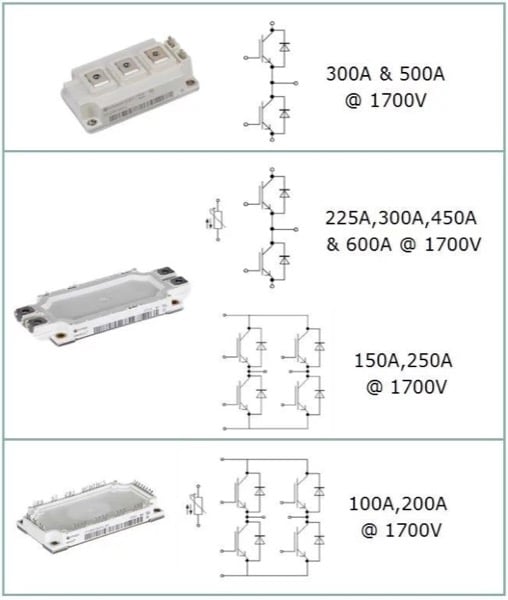 For the power electronics design engineer, the use of a CHB topology has provided a lower technical entry point into the MVD market by utilizing the basic power converter components manufactured in higher volume for the lower voltage converter market. This and the performance advantages listed have fueled the growth of this topology in the MVD market.