This article describes the basic points of the X-Series design including the improvements contributing to a safe operation of the device.

The 3300 V X-Series continues the success story of the R- and the H-Series power modules of Mitsubishi Electric by improving the overall performance of the device.

Major applications using 3300 V IGBT modules like traction, medium voltage drives or power transmission & distribution require an absolute minimization of the number of field failures. Taking into consideration all possible worst-case application conditions, it must be ensured that the device must be operated safely inside the device specification. But in reality, it is sometimes impossible to predict all the worst-case conditions, which might occur during an actual field operation. That is the reason behind the requirement, which states that IGBT modules must have a reasonable margin between the parameters representing the module specifications and the critical operation of the module.

The 3300 V X-Series was developed to improve the device durability, reliability and to further minimize the failure probability during an actual operation in the field. This article describes the basic points of the X-Series design including the improvements contributing to a safe operation of the device to ensure an overall good performance.

The first 3300 V modules (H-Series) were released by Mitsubishi Electric in 1997. The IGBT chip performance has been continuously improved over time since the release of the first generation. The first H-Series power devices have a planer gate IGBT chip structure. The subsequent R-Series devices utilize an improved planar gate structure thereby allowing a wide operation temperature range from -50 °C to 150 °C. Furthermore, a reduction of power losses and an increase in the module power density was achieved. 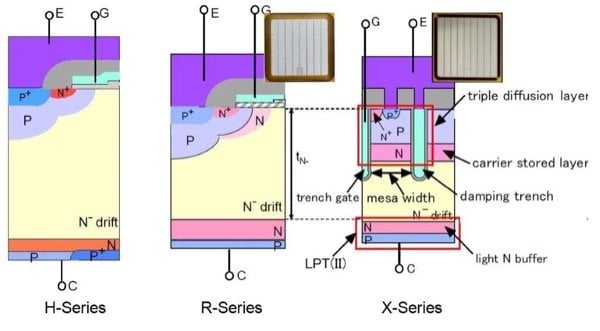 The development sequence of the 3300 V IGBT chips has been represented in Figure 1. The X-Series 3300 V IGBT chips contribute to a further increase in the module power density and additional improvement in the IGBT power module characteristics. The CM1800HC-66X will be the first device out of this new 3,3 kV X-Series that will be available in Q2/2017. It has the current rating of 1800A, it is a standard package with a footprint of 190 mm x 140 mm possessing an isolation voltage of 6 kV(AC).

The Trade-off for Optimizing the IGBT Performance

Figure 2 shows the fundamental triangular trade-off relationship of the IGBT power device. Three main parameters – the IGBT forward voltage (VCE(sat)), the turn OFF energy (EOFF) and the safe operating area (SOA) are strongly related to each other [1]. Additionally, the Short Circuit Safe Operating Area (SCSOA) is an important parameter, which affects the optimization potential of other parameters. The consequent improvement of one parameter - like the reduction of the IGBT forward voltage may cause the increase of the short circuit current. The short circuit time tSC representing the SCSOA will thus be reduced.

The X-Series 3300 V IGBT chip was designed to provide an optimized and balanced performance between IGBT forward voltage VCE(sat), turn-off switching energy EOFF and safe operating area. The design target was to maintain the 10 µs short-circuit time (which is an existing market standard) along with a reasonable safety margin. The VCE(sat) versus EOFF trade-off curve of the X-Series is shown in Figure 3. The forward voltage was reduced by about 30% compared to the previous planar R-Series devices. The turn-off energy was maintained at the same level. This improvement was possible by adopting the trench gate structure CSTBT(III)TM and increasing the active chip area. The increase of the active chip area as possible by using an advanced guard-ring structure [2].

Even with such an improvement in the forward voltage, the short circuit current is relatively low thereby permitting the utilization of a short circuit time duration of 10 µs. 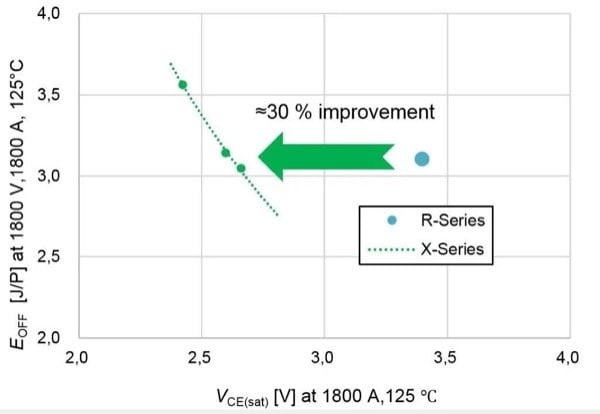 To design a power module with adequate safety and reliability, it is also important to know the real limitation of the module. In this regard, the module will be tested to ascertain the point of failure and the device under test, therefore, will be subjected to an extended short-circuit time duration. Figure 4 shows the typical short circuit measurement result with CM1800HC-66X module at maximum operating conditions of TJ=150 °C and VCC=2500 V with a time duration of 15 µs. Apart from the short circuit energy, the short circuit time is also a parameter which indicates the short-circuit device capability. With respect to the test result mentioned in Figure 4, the short circuit energy dissipated was more than 250 J. The 15µs time duration is 50% higher compared to the standard value of 10 µs, although the device could withstand 15 µs without failure. 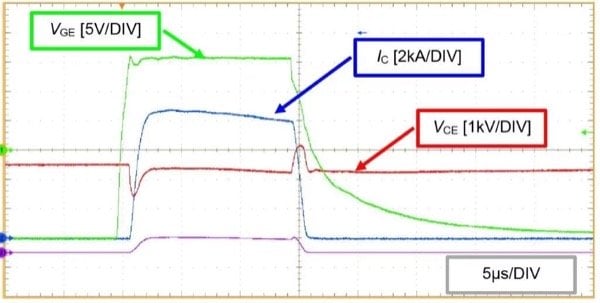 The overall electrical and thermal performance characteristics improvement can be represented by simulation result in the three-phase inverter operation. The diagram in Figure 5 shows the simulation result of the normalized RMS output current versus switching frequency under the conditions: VCC=1800 V, m=1, cos(φ)=0,9, TJ=150 °C and the junction to case temperature increase of 10 K. At the switching frequency of 300 Hz, the RMA output current of CM1800HC-66X power module can be increased by about 20% compared to CM1500HC-66R device. 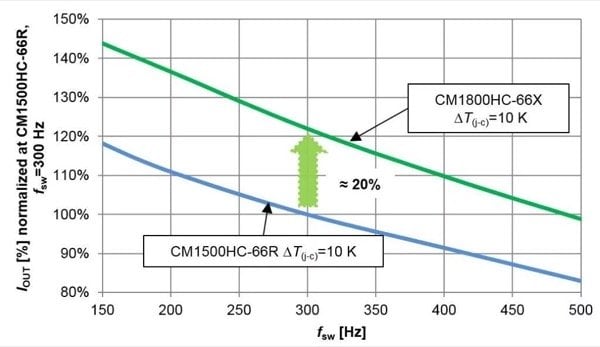 The CM1800HC-66X was designed not only to deliver good electrical performance but also to withstand harsh environmental conditions like high humidity. The part of the module that is most sensitive to humidity is the chip guard ring area. With the newly adopted Surface Charge Control (SCC) technology, it is possible to control the surface charge in the guard ring area to achieve significant humidity withstand capability even when the guard ring width is reduced [4].

The new CM1800HC-66X power module allows an improvement in the converter design by reducing the power losses or increasing the converter power density. Furthermore, it continues MITSUBISHI’s tradition of delivering high reliability and enabling a durable design in the 3300 V class IGBT power modules.