This article introduces conventional isolated gate driver technology, including discrete transformer, opto-isolated, and capacitive methods, though viable in some applications, and their present challenges for the latest EV and industrial power systems.

Along with requirements for higher voltage operation and greater efficiency, the latest EV and industrial power system trends push for greater integration and safety of power system devices. A key element in enabling these features are isolated gate drivers. Of the few methods of isolating a gate driver, the latest innovations of coreless transformer technology are paving the way for compact and efficient gate drivers for high voltage systems.

Conventional isolated gate driver technology, including discrete transformer, opto isolated, and capacitive methods, though viable in some applications, present challenges for the latest EV and industrial power systems. For instance, discrete transformers are low cost, but only allow for one-way communication from the microcontroller to the power device, and don’t allow for communication of information back to the microcontroller such as temperature and overcurrent/short circuit. In the case of opto-isolators, this method suffers from LED output drop from higher temperature operation and aging, which requires higher current input over time and temperature to compensate for the LED output degradation. Lastly, capacitive gate drivers require a sine wave signal input to turn the output on, which may cause electromagnetic interference with wireless communications, such as WiFi. 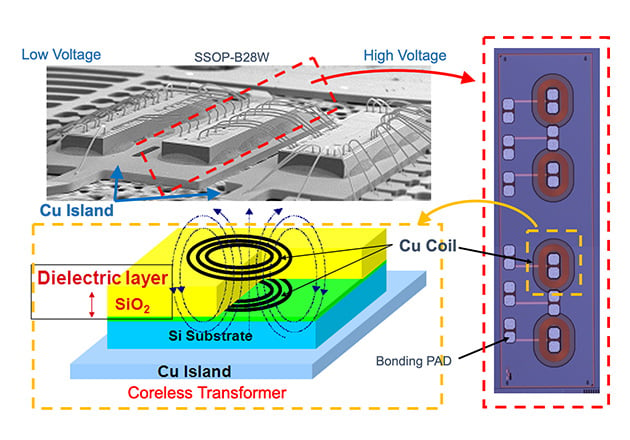 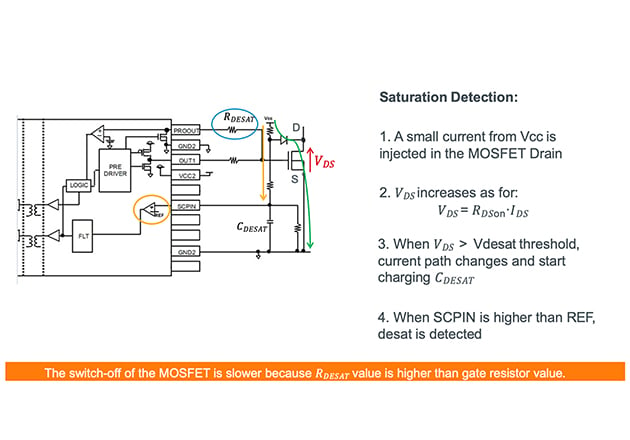 Cross wiring the XOR inputs of a half-bridge gate driver prevents both the low-side and high-side from turning on simultaneously, which is a key advantage of coreless transformer gate drivers over opto-isolator based drivers as this isn’t viable with opto-isolators. Without this feature, it is possible to enter a destructive mode where both the highside and low-side are on simultaneously, which may even lead to a small explosion in addition to device failure.

Desaturation Detection Prevents Excessive Power Damage A nominally operating power device will have roughly a 3 V difference between the source and the drain. However, during a major malfunction in the load, such as a shorted motor or power supply, the current passing through the device may reach 10 to 20 times that of the nominal operating current range. The result of this excessive current is greater than a 3 V difference between the source and drain, which results in large amounts of dissipation across the power device and puts the device at risk for overtemperature. 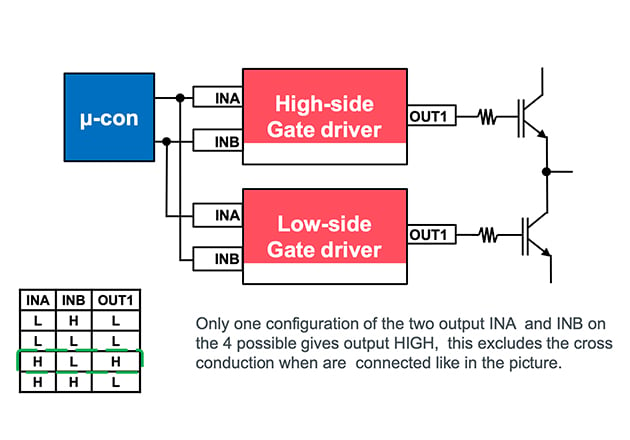 ROHM’s solution to this with the coreless transformer technology is to use pulse-width modulated (PWM) signals to carry the temperature signal, where the signal is modulated based on the temperature profile. This allows for isolation from the primary side, and enables continuous monitoring of the baseplate temperature with less risk from catastrophic failures.

For typical half-bridge power devices, a very sudden dv/dt of 10s of nanoseconds from 0 to 800 V is experienced when the low-side device is shut off and the high-side device is engaged with the drain voltage of the low-side spiking toward the power rail. This is problematic as the intrinsic gate to drain capacitance of the low-side device may become charged and develop a voltage bump that exceeds 2 V to 2.5 V, which approaches the turn-on voltage for the lower device. This situation could lead to shoot-through issues where both low-side and high-side of the half-bridge power device is on simultaneously.

ROHM’s latest Coreless Transformer Gate Drivers bring many features and performance advantages to the latest EV and Industrial power system applications. Along with extremely high isolation voltages, ROHM’s gate drivers, such as the BM6112FV-C, also include many value added features that reduce a driver BOM and ensure the safety, efficiency, and monitoring of critical power circuit parameters.

Founded in 1958, ROHM provides LSI and discrete semiconductors characterized by outstanding quality and reliability for a broad range of markets, including automotive, industrial and consumer market via its global development and sales network. In the analog power field, ROHM proposes the suitable solution for each application with power devices such as SiC, driver ICs to maximize their performance, and peripheral components such as transistors, diodes, and resistors.