This article discusses the alternative and new devices that can maintain or improve the thermal performance of MOSFETs in power supplies.

Everywhere you look, you will find electrical devices and products. These devices all need to be powered or charged whether they are the latest mobile phone, the television in a living room, or the light over a desk at work. Consumer demand is driving the development of power supplies for these devices that are more efficient, smaller, and less costly than ever before.

The need for increased efficiency, improved power density, and lower cost without negatively impacting other key requirements is pushing designers to find new and innovative alternatives to the traditional design choices.

There are many solutions that can be explored.  Some require product redesigns, and others fit well into the existing layout.  One area where significant cost savings can be found is in the design and packaging choice for high-voltage and high-ohmic Metal Oxide Semiconductor Field Effect Transistors (MOSFETs). Here, there are alternative and new devices that can easily keep the design or redesign costs to a minimum and maintain or improve the thermal performance of existing solutions.

In 1999, Infineon introduced the CoolMOS™, a MOSFET drain structure design that was based on the innovative Superjunction concept. The construction of the Superjunction transistor allows a reduction in area-specific resistance, and this, in turn, provides conduction loss benefits. The dramatic reduction in chip area for the first generation of CoolMOS™ technology lowered capacitance and dynamic losses as well.

Over several generations, the original CoolMOS™ design was refined and improved. In 2016, the CoolMOS™ CE series was released in a SOT-223 package. SOT-223 package was selected because it directly addressed the need for cost reduction in price-sensitive applications while maintaining similar thermal performance and one-to-one footprint compatibility with the long established DPAK packages.

The current CoolMOS™ in SOT-223 portfolio has been expanded and now includes the CoolMOS™ P7 family, combining all the benefits of the very latest Superjunction MOSFET technology with the cost and size advantages of using a SOT-223 package. The result is a highly cost-effective space saving device choice for low-power applications.

Figure 1 shows a comparison of the dimensions of the DPAK and SOT-223 packages. As you can see, the leads of the SOT-223 package will fit directly on the DPAK footprint. This common footprint means that the SOT-223 can easily be used as a direct replacement in existing PCB designs. The SOT-223 comes with a size advantage as well because it has a 25 percent lower package height and 35 percent shorter package length than the DPAK package. 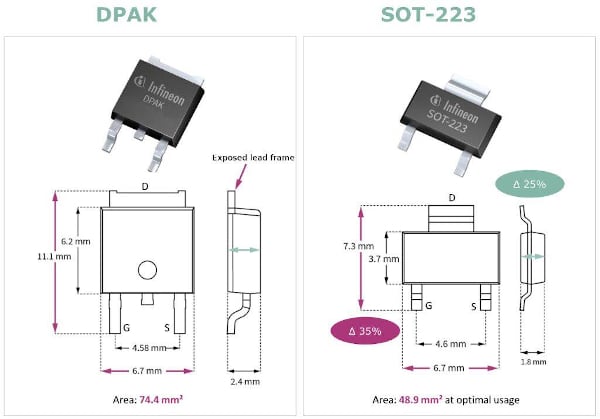 Figure 1: Size comparison of the CoolMOS in DPAK and SOT-223

One of the most noticeable differences between the DPAK and the SOT-223 packages is clearly visible when the devices are compared side-by-side; DPAK has an exposed lead frame, and SOT-223 does not. This may cause designers and engineers to conclude that there are thermal limitations on this design and a MOSFET in SOT-223 can only be used as a plug and play replacement for DPAK if they accept a higher operating and case temperature, or if the application design has a low overall power loss. Extensive testing has shown otherwise, although there are a few limitations.

If the power losses are greater than 250 mW, additional copper around the drain pad must be included in the PCB design layout in order to help keep the device cool. Figure 2 shows a direct comparison of the device temperature with respect to the copper around the drain pad in DPAK and SOT-223 based on thermal simulations. The standard DPAK package on a standard DPAK footprint with the recommended copper area will operate at 85 °C (point A in Figure 2).

If the DPAK package is replaced one-to-one with a SOT-223 package you will observe a 4 °C to 5 °C temperature increase (point C in Figure 2). If you increase the copper area by at least 20 mm2 to 40 mm2, the operating temperature of the SOT-223 device will drop to the same level as the DPAK device (point D in Figure 2). 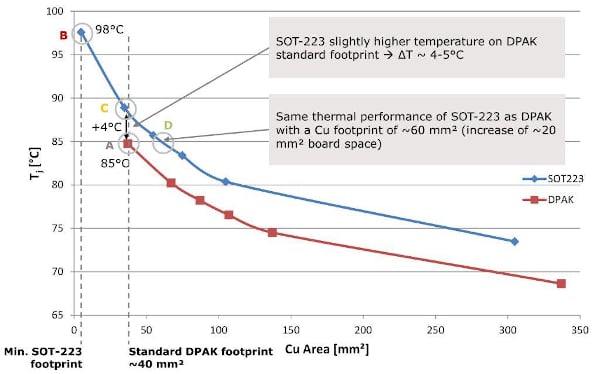 The best way to demonstrate the interchangeability of the DPAK and the new SOT-223 packages is to look at a real-world example. A plug-and-play comparison was done on a commercially available 52 W LED driver board (see Figure 3).  The original design used an 800 V CoolMOS™ C3 in DPAK. Table 1 shows the basic specifications of the selected LED driver board. 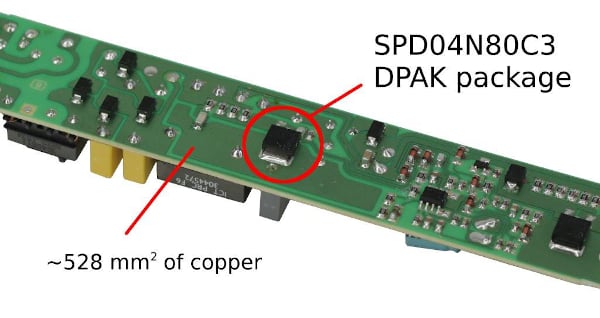 Testing was done with a 230 V AC input voltage, at a stabilized ambient temperature of 25 °C, and with a normal device enclosure. No additional design changes or modifications were made other than changing the MOSFET. The MOSFET temperature was measured with thermocouples attached to the MOSFET. The device efficiency was measured at three operating points with the following setup:

In the original layout of the LED driver board, approximately 530 mm2 of copper around the drain pad is used to help dissipate the heat generated by the original DPAK package. The application test was done with a closed case and with the same thermal-gap pad that was used in the production version of the product. The thermal-gap pads help to reduce the MOSFET operating temperature by connecting the copper area and the device to the device enclosure. 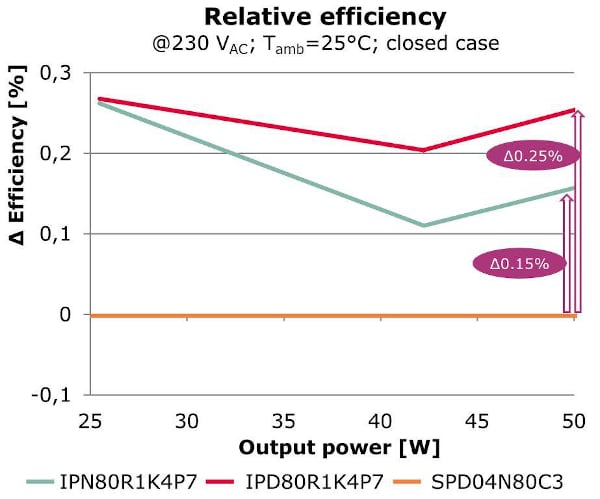 The real-world application test clearly shows that the smaller SOT-223 functions perfectly as a drop-in replacement for DPAK. It is smaller, more efficient, and comes with significant cost savings as well.

The CoolMOS™ P7 in SOT-223 is currently available in three voltage classes, 600 V, 700 V, and 800V. The 600 V and 700 V devices are standard grade products and the 800 V devices are fully qualified as industrial grade. The 600 V devices are a perfect fit for PFC, flyback and LLC stages in half-bridge or full-bridge configurations. The 700 V and 800 V devices are only suitable for PFC or flyback topologies where there is no hard commutation of the body diode. The full portfolio will be available by the end of 2017 and will cover an RDS(on) range from 360 mΩ up to 4500 mΩ.

The desirable combination of a high performance MOSFET that is cost-effective is sometimes difficult to find. The compromises are often in areas that are a challenge to deal with in the application designs. A larger device, for example, can have great thermal characteristics, but then it is hard to fit it into the end product when the consumers are demanding smaller and smaller products. This is where the strength of CoolMOS™ P7 in SOT-223 lie: high efficiency of the Superjunction MOSFET technology combined with a low-cost package that fits into existing DPAK-based designs.

The thermal characteristics are within an acceptable range if you use the minimum DPAK copper area requirements, which is often within thermal allowances in the design. If space allows, adding an extra 20 mm2 of copper improves the thermal performance to a point where it comes close to a traditional DPAK-based solution.

The CoolMOS™ P7 provides ease-of-use and fast design-in supported by a low ringing tendency and can be used across PFC and PWM stages. Excellent efficiency FoMs, in particular, the low switching and conduction losses, and improved driving losses guarantees the highest efficiency and help to manage the thermal load of low power supply solutions.

The unique ease-of-use properties of the CoolMOS™ P7 device family are the result of carefully selected and integrated gate resistors where needed. In addition, the CoolMOS™ P7 600V has an outstanding body diode ruggedness which makes it the perfect fit not only for hard but also for soft switching applications (LLC).  The excellent ESD robustness of greater than 2 kV (HBM) over a large portion of the portfolio supports high assembly yields.

Almost two decades of Superjunction technology innovation has brought us to the CoolMOS™ P7, and with it now available in a SOT-223 package, designers and engineers have a MOSFET choice that provides an excellent balance between performance, ease-of-use, small application footprint, and price. Additional information on CoolMOS™ P7 in SOT-223 can be found at

Stefan Preimel has worked in the semiconductor industry since 2009. At Infineon, he is responsible for the MOSFET section of Lighting. He is not only working as an Application Engineer, which gives him the opportunity to build up Application knowledge, but also develops specific customer parts as a Product Engineer.