Recent developments in power system components have enabled the designer to configure power supply systems of vastly greater performance than was possible only a short time ago. This has been driven in part by an acute need; today’s systems are built around microprocessors and FPGAs that demand ever-higher currents at an unprecedented variety of lower voltages.

The circuit boards on which those components reside require multiple power rails, of high stability, at high power levels, and often with complex sequencing constraints. Scale up to the rack and system view, and the problem becomes infinitely more complex.

Innovative power conversion architectures, taking advantage of evolving power semiconductor technologies, have risen to the challenge, especially in terms of the high-performance modular solutions now available. The designer’s task has not, however, been made any simpler because those same advances in technology have expanded the options available with which to configure a system, and to meet any given specification.

The range of modules available today have made a change that appears subtle, but can be radical in its impact.  They have separated out the basic functions of a power supply, such as voltage level conversion, regulation, and isolation. With the freedom to place these functions as-needed through a power supply chain, comes the need to explore many more options to find the optimum layout.

Innovative devices such as Vicor’s BCM provide an example of how design choices are expanded. A BCM is a low-voltage DC-DC bus converter module; using Vicor’s Sine Amplitude Conversion technology, it provides bi-directional fixed-ratio conversion at very high efficiency. Packaged in the IC-style ChiP, or the easy-to-use VIA packaging technology, the BCM gives the power engineer an isolated DC-DC conversion function. Regulation can be done upstream of the BCM; feed it a stable 48V and it will directly supply a low-voltage rail on a PCB with no further regulation required. Or, it can down-convert a rail that has less precise regulation to a low voltage, leaving individual point-of-load (PoL) regulators to supply power to what might be a multiplicity of on-board rails. 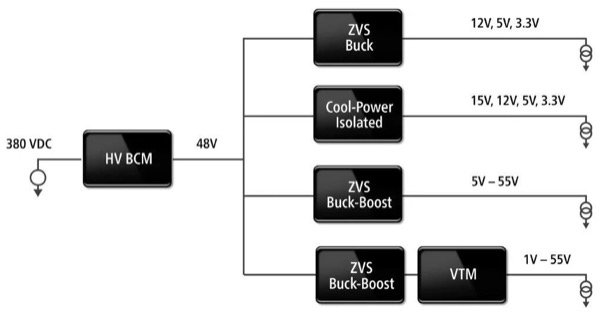 The BCM takes its place in a large portfolio of power components, such as the VTM, a point-of-load current multiplier (again, fixed-ratio conversion); PRM, a regulator for use in Factorized Power architecture, that would feed a VTM to generate PoL voltages; and the DCM, an isolated, regulated DC-DC converter. These examples are part of a broad portfolio of regulated and non-regulated, isolated or non-isolated, functional blocks that can be assembled in a virtually limitless number of ways.

For the power engineer, the question becomes less, “can I achieve the necessary power provision?” and much more, “how do I determine the optimal solution for my power design, given the comprehensive array of options?”

In the past, design choices were often rapidly narrowed by product performance and by accepted practice. For example, a 48V distribution rail is frequently a standard feature of a power distribution scheme. However, with earlier generations of buck converters, conversion efficiency would typically decline sharply at high conversion ratios (from 48V to single-figure voltages).  Therefore, and with PCBs demanding more and more rails at voltages down to – or lower than – 1V, a further distribution level of, perhaps 12V might be interposed.

What is the cost of optimization?

With Vicor’s power components, however, converting from 48V direct to PoL is not only feasible, it can be the most efficient option when the losses associated with generating an intermediate bus are eliminated. It does not take a great leap of imagination to observe that the ‘universe’ of feasible solutions has expanded enormously. It has become an optimisation problem; one with many dimensions and, in all likelihood, multiple candidate solutions.

To achieve optimal efficiency, the power engineer has had no option but to turn to the data sheets. Every data sheet presents page after page of charts showing operating parameters and performance of its particular device. Having decided on a suitable power system topology, the designer has to work through it, establishing the operating point of each module, look up their conversion efficiencies and losses, sum them by pencil-and-paper or by spreadsheet – and then repeat the exercise for every alternative configuration that looks like a realistic option.

If standby power is a consideration: repeat the process using the quiescent power figures for every block.  The option, noted above, to place the fundamental functions of power conversion at-will along the conversion chain offers a further degree of freedom. To a certain extent, and given that some losses/heat dissipation are inevitable, the engineer may adjust the supply topology to have those losses concentrated where they are most easily dealt with.

When all of that is completed, the designer will only have explored efficiency and losses.  Other constraints may very well apply, not least, cost. Alternative configurations that perform to specification in electrical terms may be significantly different in bill-of-materials terms. Another aspect of power supply design that has hardly changed over many generations is that power provisioning may be left to fit in the cabinet or rack space remaining when the design of every other aspect is complete. Therefore, physical footprint can become critical; not only of major blocks such as off-line AC-DC conversion, but of point-of-load regulators and any associated passives in their footprints, distributed around PCBs.

It was against this background that Vicor created its online Power System Designer software package, designed to allow an engineer to create a power system in minutes. The Power System Designer is a simple-to-use, parametric-input tool that leverages Vicor’s Power Component Design Methodology and delivers optimized power fast. Using Vicor’s high-performance power components, the tool asks the designer to define a system in the simplest terms; input and outputs. Using that data, it automatically generates a complete power supply configuration, together with all relevant operating parameters. 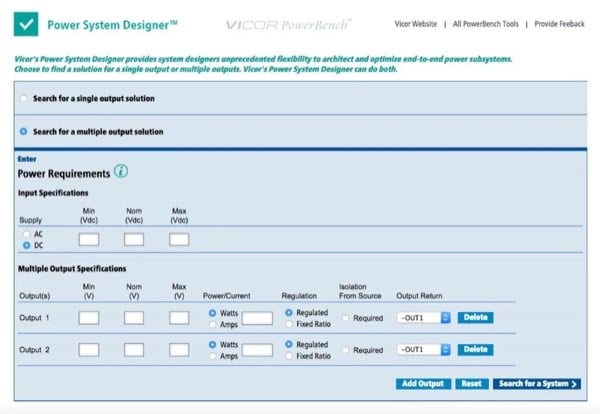 No other tool provides such simplicity of use nor the same complete end-to-end (Source to PoL) coverage. Although the Power System Designer is not a full circuit simulator, it is backed by comprehensive and detailed simulation of every Vicor power component. It is closer to a behavioural model-based approach, where the detailed circuit operation of every component and module has been simulated and/or measured in real-world operation and tabulated, in a form the tool can rapidly access.

Added to that is a degree of rule-based behaviour; in the broad span of solutions available with Vicor’s power components, there are some choices that are inevitably more productive than others, and that knowledge is built into the software. Due to its mode of operation, the Power System Designer is fast and precise, delivering results instantaneously. When the time comes to verify a solution with a more detailed parametric analysis, the package acts as a “front-end” to Vicor’s fully-editable Whiteboard tool.

Customize your solution based on your key figures of merit

Given AC or DC input source and operating range, together with required output voltages and respective power (or current), regulation and isolation specifications, the software automatically identifies not only a “best” solution, but presents a range of alternative solutions, each one accompanied by a spread of figures-of-merit. Efficiency is presented not only as an overall conversion efficiency, but broken out into front-end and PoL efficiencies. Other parameters include:

Once again, the designer can consider options for “moving” footprint (physical area) along the power conversion chain as the tool returns total, front-end and PoL footprint figures for each solution. For any selected design, the Power System Designer can display a visual representation of the mechanical layout of the system and generate a complete Bill-of-Materials along with ordering and pricing information.

A more holistic, faster approach to designing your power system

The Power System Designer also reports the power utilization of the front-end and of each PoL output – that is, how much of the capacity of each component specified in the chosen solution, is actually being used. The engineer thereby gains a detailed view of both design margin and capacity utilization of a given design. For more detailed analysis, launching Vicor Whiteboard is only a single-click away. 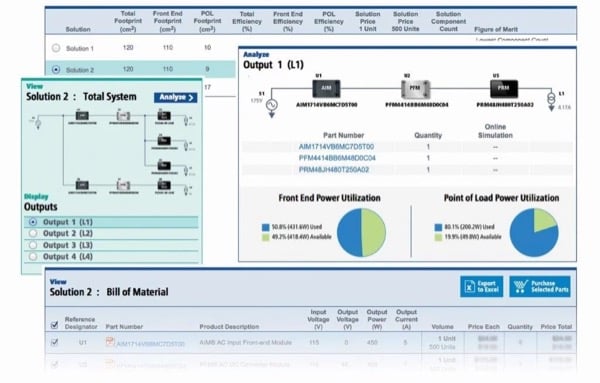 The Power System Designer is a significant advance over simulators and design aids that have been offered up until now, in that it takes a holistic view of the power provision function from input to output, rather than focussing on front-end parameters or point-of-load performance in isolation. Allowing exploration of the full range of solutions possible with Vicor’s comprehensive families of field-proven, high-density modular power components, that are capable of addressing virtually any front end or power train requirement, fast-tracks the route to superior power density and quicker time-to-market, while minimizing design risks.