"The light around us offers abundant energy to be harvested, both indoors, even in lowlight and outdoors in solar light. Atmosic leverages these sources to harness photovoltaic power for IoT devices," said CEO, David Su.

Atmosic's photovoltaic-power connectivity solution is a feature of its M3 series, built on the Bluetooth® 5 standards platform and the company's Lowest Power Radio and On-demand Wake-Up technologies, which enable 10 to 100 times lower power than comparable IoT solutions on the market. The M3 series features energy harvesting to enable forever battery life for IoT devices to be "Forever Connected, Anywhere." 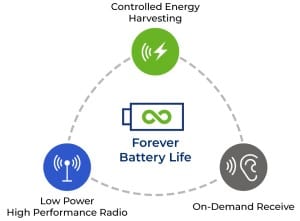 Atmosic believes the advances of Bluetooth® technology with its latest iteration known as Bluetooth 5, offers the ideal wireless platform, upon which the company has built its inaugural solutions. The new Bluetooth 5 offers performance increases over legacy Bluetooth by 4x the range, 2x the speed and 8x the bandwidth.

Enhancing this standards-based platform with its lowest power radio, Atmosic has achieved 10-times lower power in Bluetooth 5-based products. Combined with on-demand wakeup these solutions are capable of 100-times lower power. And with controlled energy harvesting Atmosic's ICs make the batteries in IoT devices last forever or be battery free.

The M3 Series silicon is sampling with customers now, and will be in mass production at the end of Q2.