In December of 2017, Solid Power reported its collaboration with the BMW Group to develop Solid Power's solid-state batteries for electric vehicle applications and to tailor Solid Power's technology to meet automotive requirements for high-performance EVs.

"Solid-state battery technology has the potential to help us deliver electric vehicles that are even safer and more capable," said Ken Washington, vice president, Research and Advanced Engineering, and chief technology officer, Ford Motor Company. "Our involvement with Solid Power enables us to further collaborate in an important emerging technology that could truly transform the design and integration of smart electric vehicles into tomorrow's smart world."

"Companies like Ford are part of the movement that is changing the automotive industry and we are honored to be working together," Solid Power's co-founder and CEO Doug Campbell said.

"ASSBs have the potential to provide greater energy, which translates to greater run-time per charge or in the case of an electric vehicle, greater range from a fully charged battery. By combining state-of-the-art cathodes with metallic lithium anodes, ASSBs can achieve up to a 50% increase in cell level energy vs. current lithium-ion cells while even greater energy improvements are possible with more advanced cathodes, which is an additional area of development for Solid Power." 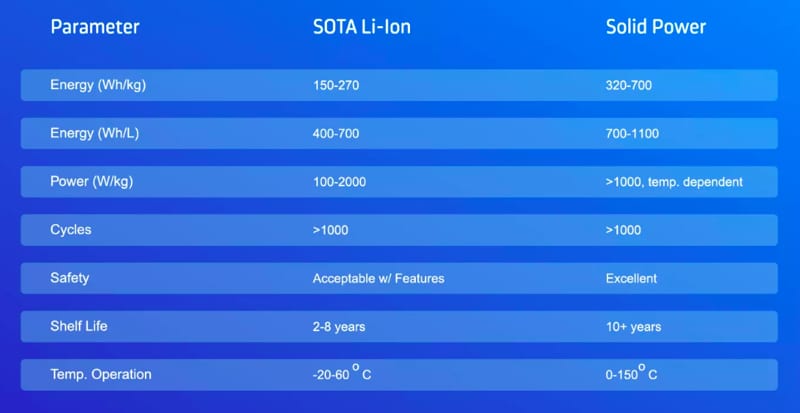 Another benefit, of their ASSBs according to Solid Power is an increased energy density. As a result of this improved energy potential, Campbell pointed out that ASSBs are receiving heavy interest from a wide range of markets beyond ground transportation including aerospace, medical devices, and defense among several others.

Solid Power claims that its solid-state battery technology offers 50% higher energy density compared to current lithium-ion, which can increase at the module- and pack-level due to design simplicity. The company also says that its technology provides substantially improved safety because the design eliminates the flammable liquid electrolyte as used in lithium-ion batteries. Solid Power notes that its technology is also less expensive because the low-cost battery packs can minimize the required safety features and simplify thermal management.

Another advantage of the company's solid-state batteries is their high manufacturability due to their compatibility with automated, industry-standard, roll-to-roll production.