Massachusetts-based semiconductor giant Analog Devices (ADI) has completed its acquisition of Maxim Integrated in a $20.8 billion mega-deal to boost its analog and mixed-signal portfolio and expand its reach in more markets.

In the announcement, ADI President and CEO Vincent Roche called the completion of the deal a “tremendous milestone” for the company. “With more than 10,000 engineers and the increased breadth and depth of our best-in-class technologies, we are well-positioned to develop even more complete, cutting-edge solutions for our customers,” Roche added. “Together, we will drive the next waves of analog semiconductor innovation, while engineering a healthier, safer, and more sustainable future for all.”

In announcing the merger last year, Analog Devices said the deal would create a combined company worth over $68 billion. An investor presentation also noted it would increase the diversification of its offerings, with over 50,000 SKUs serving more than 125,000 customers across hundreds of applications in the company’s target markets.

Specifically, ADI would be able to broaden its capabilities across analog and mixed signal devices, power management systems, radio frequency, digital and sensor products, serving the communications, automotive, consumer, and industrial end-markets. The acquisition would also combine over 10,000 engineers, 62 design centers, 23,000 employees across 35 countries, and about $1.5 billion in R&D investments. 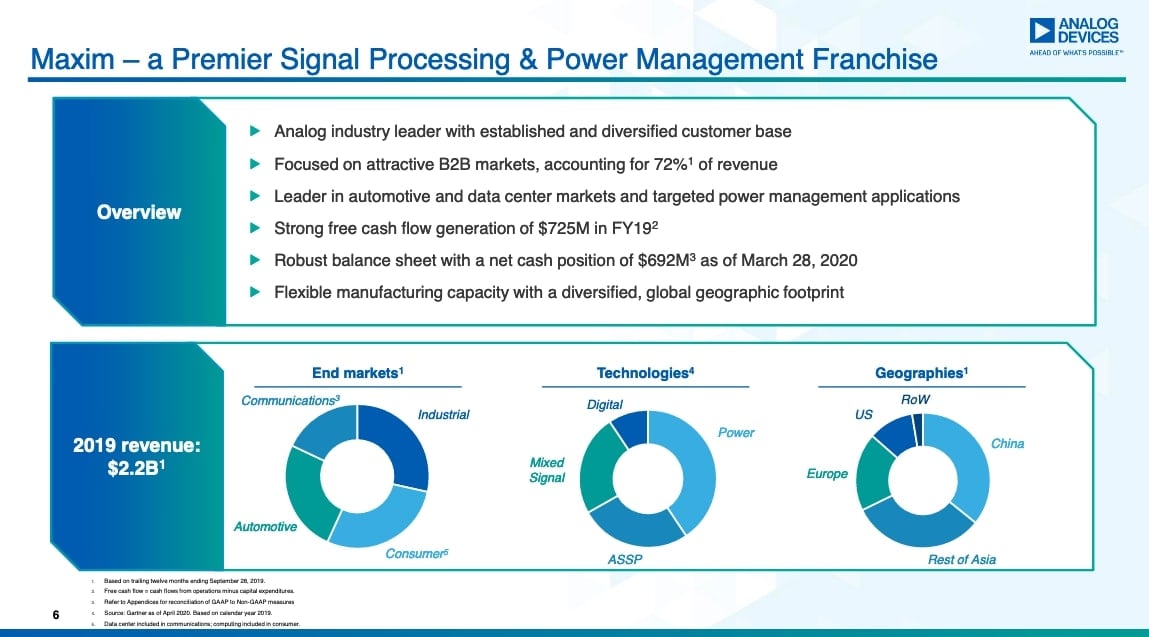 The deal’s closing comes as Analog Devices reported an all-time record of $1.7 billion in revenue for the third quarter, up 21% since this time last year. In the announcement last month, Roche stated that all of the company’s markets increased sequentially, with the industrial and automotive segments seeing record growth.

“Robust bookings across all end markets, combined with lean inventories and ongoing capacity additions will enable us to close this year on a high note and continue to grow into fiscal 2022,” Roche added.

California-based Maxim Integrated, which dominates in analog and mixed signal IC design and manufacturing, released its fourth-quarter 2021 earnings report in July with $720 million in revenue, up 8% from the third quarter and 32% from this time last year.

According to its investor presentation, Maxim’s industrial segment accounted for most (or 34%) of its revenue, increasing 21% from the fourth quarter of 2020. Its automotive segment, which accounted for 31% of overall revenue, grew 86% from last year, while its consumer business (19% of total revenue) jumped 59%. However, its communications and data center business (17% of revenue) fell 15% from last year.

Maxim Integrated will now operate as a wholly-owned subsidiary of ADI. With the acquisition finalized, ADI’s customer FAQ page notes few operational changes regarding orders, products and accounts. Maxim Integrated board members—former president and CEO, Tunc Doluca, and former founding executive of Avago Technologies, Mercedes Johnson—will join ADI’s board of directors. The company will further discuss its capital allocation priorities and provide an updated fourth-quarter 2021 outlook in a webcast on Sept. 8.