Members of XP’s DRC series of power supplies are packaged in low-profile cases, allowing the devices to be placed along with units such as circuit breakers inside consumer unit boxes. 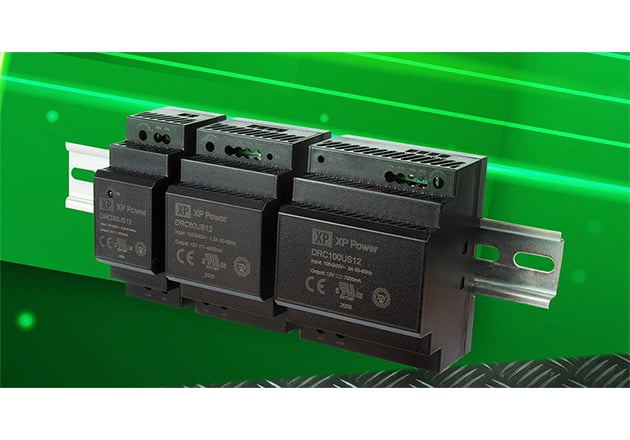 Within each of the three series, there are devices available offering 12, 15, 24 and 48 volt outputs. Additionally, the DRC30 and the DRC60 series feature versions offering 5 volt outputs.

Class II devices, such as XP’s three new series, do not need an earth ground connection for safety. This is a boon in terms saving on both installation time and costs.

What is a Din Rail?

A DIN Rail is a metal rail used for mounting items such as industrial control devices, circuit breakers and power units inside equipment racks. Always metallic, they may be used to provide chassis grounding but are never used as a busbar to carry current.

Important Features of the DRC Series of Power Supplies

All units are certified to EN55032 Class B for conducted and radiated emissions, no additional filtering is required for EMC compliance.

Screw terminals provided for input and output connections make installation easy. A front panel adjuster is provided to increase output voltage to compensate for a voltage drop caused by a long cable run, and a LED indicator provides a clear visual indication that the device is on.

Typical power efficiencies are up to 91%, and there is no minimum output load required for any of the units.

All the members of the three series offer 4kV of input-output isolation and they can withstand an input surge of 300VAC for five seconds. Touch current for members of the DRC30 and DRC60 series, with an input voltage of 264VAC at 60Hz, is 0.25mA (rms). The analogous figure for DRC100 devices is 0.5mA (rms).

Maximum capacitive loads vary greatly, both between series and among units within each series. Details can be found in the separate data sheets for the DRC30, the DRC60 and DRC100 series.

The units operate over a -40 to +70 °C temperature range. All models derate linearly from +50℃ to +70℃, declining to 50% rated power at 70℃. For temperatures below -30℃ down to the devices’ limit at -40℃, declines vary but they are significant. The details are spelled out in the data sheets