As per VICOR’s announcement, VoltServer’s Digital Electricity is a method of power distribution “with the high power aspects of AC and the safety and simplicity of Power over Ethernet (PoE).” Vicor has worked closely with Voltserver on Digital Electricity, and Vicor’s BCM6123 fixed-ratio bus converter is an integral part of the new solution.

The world’s explosively growing array of 5G networks, internet of things (IoT) and artificial intelligence applications collectively deploy billions of intelligent edge sensor devices that send and receive real-time data to the cloud. A growing challenge is how to safely and efficiently power this  ever expanding universe in a manner that is both safe and efficient as well as being cost effective.

What is Digital Electricity?

The announcement describes Digital Electricity as “a third power format in addition to the AC and DC.” Of course, the actuality is a bit more prosaic than all that, but no less interesting.

VoltServer’s solution is to take the electricity purposed to powering remote devices and converting it into small pulses of energy, or “energy packets.” Those pulses, sent from the energy transmitter to a receiver over the cable, also contain embedded data that is analyzed at the receiving end. If a fault is detected, transmission is instantly ceased.

If a fault is detected, the next energy packet is not sent. Because each individual packet contains only a tiny amount of energy, it by itself is no hazard to people or to equipment. With no hazard encountered, Digital Electricity turns the pulses back into conventional AC or DC to power local loads. 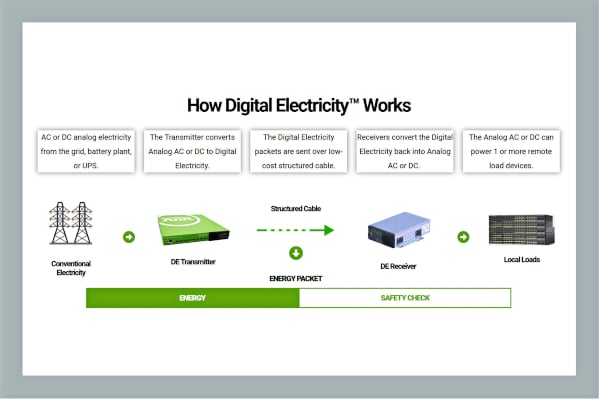 As described by VoltServer’s co-founder and CEO, Stephen Eaves. “Imagine a powerful stream of water sent through your plumbing. If a pipe were to burst, the high pressure could injure someone. Instead, break the stream down into millions of droplets.” He goes on to say that, “The droplets can be put back together to get the amount of water needed, but each droplet of water is safe. Digital Electricity is similar by only putting a small amount of energy in packets. Each packet becomes safe, but the total power needs can still be met.”

Similar to Power Over Ethernet

Voltserver employs Vicor’s BCM6123 fixed ratio bus converter in the receiver portion of the Digital voltage system. The digital voltage pulses described earlier are transmitted at high voltage to reduce I2R losses. These packets are readily handled by the  BCM6123, which features a one-to-eight “K” ratio, and as such, can convert 200V to 25V, or 400V to 50V.

The device, available in a 0.99 x 2.402 x 0.286 inch package, features 97% power efficiency, which results in no cooling fan being needed even when the receiver is located in a tight enclosure. It is capable of a continuous current output of up to 30A, a power density of up to 2342W/in3 and 4,242VDC of isolation. Low EMI output means that little filtering is required, further reducing space requirements.

“With the Vicor converter, we have 43% less heat loss than a normal converter, and the heat sink size decreases proportionally,” said Dan Lowe, VoltServer co-founder and Chief Business Officer. “Our customers include the top three mobile network operators in the U.S., so the requirements for reliability are extremely demanding. That’s where Vicor comes in really, really neatly.”