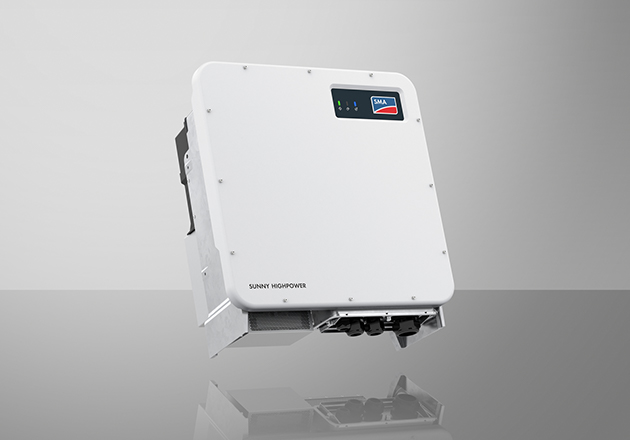 In the Sunny Highpower PEAK3, the CoolSiC™ modules almost double the specific output from 0.97 to 1.76 kW/kg.
Image courtesy of Infineon Technologies.

With the Sunny Highpower PEAK3 from SMA, available since 2019, decentralized photovoltaic power plants can be planned flexibly and efficiently up to the megawatt range. The basis for this is the compact design designed for 1500 VDC, which delivers an output of 150 kW per unit. This is made possible by SiC technology from Infineon: Six power modules of the type CoolSiC™ EasyPACK™ 2B and 36 gate drivers of the EiceDRIVER™ family 1ED20 convert the direct current generated by the solar cells into grid-compatible alternating current - with an efficiency of over 99 percent.

"Silicon carbide enables us to build the inverters compact, powerful and reliable," said Sven Bremicker, Head of Technology Development Center at SMA. "In the Sunny Highpower PEAK3, the CoolSiC modules almost double the specific output from 0.97 to 1.76 kW/kg. Due to the compact design, the inverters are much easier to transport and much faster to install." The advantages of a decentralized plant layout can thus be combined with those for central inverters. Expansions are easily possible even after the photovoltaic power plant has been commissioned.

"SiC-based power semiconductors are more expensive than silicon solutions," said Dr. Peter Wawer, President of the Industrial Power Control Division of Infineon. "But thanks to the electrical properties of the material, this is more than offset at system level. Higher switching speeds and efficiency allow transformers, capacitors, heat sinks and ultimately packages to be smaller – and thus save system costs. We are very proud to have convinced with SMA the European market leader in photovoltaic inverters of the advantages and to support volume production with our innovative SiC products." Not only photovoltaic systems profit from these advantages. Demand for SiC-based solutions from Infineon is also growing in other industrial sectors and for applications such as uninterruptible power supply and charging infrastructure for electric vehicles.

The Rapid Development of Customized Modules

Infineon has developed a customer-specific solution for SMA that includes both a classic TRENCHSTOP™IGBT and a CoolSiC™ MOSFET with body diode. The ANPC (Active Neutral-Point Clamped) topology allows system voltages up to 1500 V maximum to be switched with switches designed for 1200 V. The topology thus uses the advantages of SiC, although only some of the switches in the EasyPACK module are based on it. Overall, the use of SiC reduces the complexity of the inverter. This not only increases efficiency but also makes the system easier to maintain and extend its service life.

As the global market leader for power semiconductors, Infineon offers the largest SiC portfolio of Easy modules for industrial applications. Thanks to its many years of expertise, the various chip technologies, and the available production capacities, this platform can be adapted to customer requirements and brought to series production readiness at short notice. Due to the strong increase in demand for SiC discretes and modules, Infineon continues to invest in the expansion of SiC capacities at its own manufacturing sites.

As a leading global specialist in photovoltaic system technology, the SMA Group is setting the standards today for the decentralized and renewable energy supply of tomorrow. SMA’s portfolio contains a wide range of efficient PV inverters, holistic system solutions for PV systems of all power classes, intelligent energy management systems and battery-storage solutions as well as complete solutions for PV diesel hybrid applications. Digital energy services, as well as extensive services up to and including operation and maintenance services for PV power plants, round off SMA’s range. SMA inverters with a total output of 75 gigawatts have been installed in more than 190 countries worldwide. SMA’s multi-award-winning technology is protected by approximately 1,400 patents and utility models. Since 2008, the Group’s parent company, SMA Solar Technology AG, has been listed on the Prime Standard of the Frankfurt Stock Exchange (S92) and is listed in the SDAX index.

Infineon Technologies AG is a world leader in semiconductor solutions that make life easier, safer and greener. Microelectronics from Infineon is the key to a better future. In the 2019 fiscal year (ending 30 September), the Company reported sales of €8.0 billion with about 41,400 employees worldwide. Infineon is listed on the Frankfurt Stock Exchange and in the USA on the over-the-counter market OTCQX International Premier.