The new, 18650 cylindrical lithium-ion cell reportedly features the highest energy density ever achieved for this type of component and provides a 28% longer run time than traditional cell chemistries. 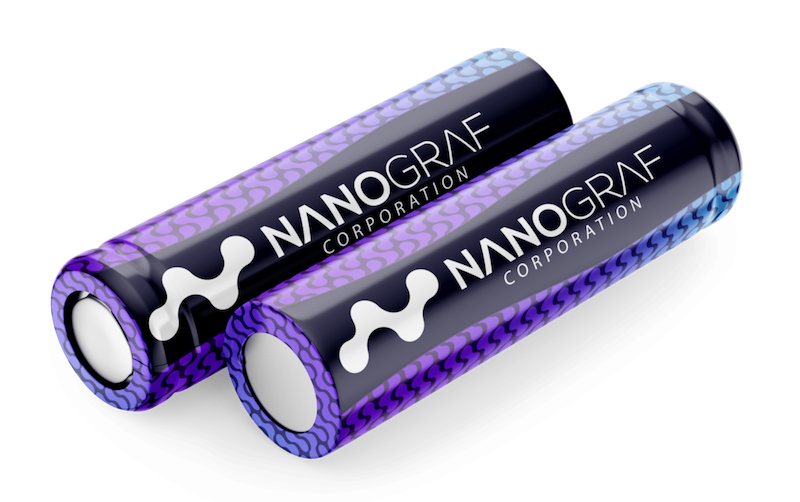 A mock-up of the new battery. Image used courtesy of NanoGraf

Founded in 2012 by Cary Hayner, Joshua Lau, and Samir Mayekar, the Chicago-based firm has so far raised $19 million in funding from the US Department of Defense (DoD), the US Council for Automotive Research, and others.

NanoGraf counts a number of industry partners, including FCA, General Motors, and Ford, among others. The company is also one of the only advanced materials companies to receive an anode materials development contract from the United States Advanced Battery Consortium (USABC).

According to NanoGraf, the limited range of electric vehicles (EVs)’ batteries represents a major impediment to mainstream adoption of the technology.

The NanoGraf’s 18650 cell recently developed by the company aims to overcome these issues by delivering up to 1400 mAh/g. For context, most graphite-based anodes today offer a capacity of 372 mAh/g.

NanoGraf’s proprietary manufacturing process is reportedly different from competitors since it does not rely on expensive and complex vapor deposition-based systems.

Instead, the company employs a highly scalable wet chemistry process perfected in the course of a multi-ton-scale pilot manufacturing line in Japan.

NanoGraf’s anode materials drop into existing electrode mixing and coating equipment and have been patented in collaboration with researchers at Northwestern University and Argonne National Laboratory.

“This is a breakthrough for the battery industry,” explained NanoGraf President, Dr. Kurt Breitenkamp. “Energy density has plateaued, only increasing eight percent or so over the last decade. We just achieved a 10 percent increase in a little under a year. This is over a decade’s worth of innovation in one technology.”

EVs are the most obvious application for the new battery cells, but NanoGraf said the technology can also serve other and widely diversified applications.

For instance, the firm has mentioned how the NanoGraf-enabled battery could substantially reduce the weight of soldier-carried military electronics and equipment, which are often the second heaviest category of equipment after body armor.

In addition, the new batteries could be used in consumer electronics to enable longer-lasting, lighter weight, and shortened charge cycles in a variety of devices, including smartphones, laptops, and more.

The release of the new technology follows the $7.5 million contract NanoGraf signed with USABC back in 2019.

For more information about the company, you can head over to their website following this link.