The batteries pack the power to communicate over short or long distances, and were especially designed to power IoT devices integrated with Semtech's LoRa® devices for low power wide area networks (LPWAN), as well as working with Bluetooth Low Energy and other standards. 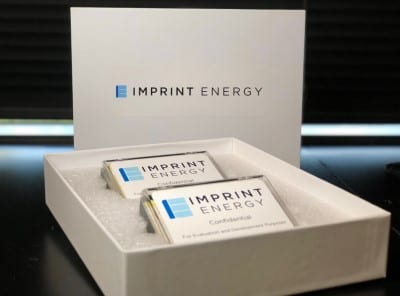 Imprint's batteries are well-suited to powering large numbers of IoT devices, sensors and labels now coming to market. Imprint has continued to advance both its ZincPoly™ battery chemistry and its process technology for high-volume, low-cost production.

The zinc polymer-based chemistry enables environmentally-safer batteries that are rechargeable and/or disposable; offer higher energy density in thin formats; show low resistance to support the power surges needed to wirelessly communicate over long distances; and are simpler to make.

Imprint's manufacturing process technology has been demonstrated on low-, medium- and high-volume printers, including common surface-mount technology lines and, as trials have demonstrated, roll-to-roll screen printers.

This allows Imprint partners, like electronic manufacturing services firms and contract manufacturers, to make batteries via a "mass print" approach rather than assembling them one at a time, and to directly integrate Imprint batteries with sensors, chips and antennas, further reducing total device costs.