The new series of devices accommodates up to six 250 W AC/DC cassettes into one 19” rack system.

Seeking to enhance its previous power supply subrack system offering, Bel Power Solutions announced on April 5 its new LRSA series, which employs the company’s LR2320-9 or LR2540-9 converters in tandem to provide power, in up to 78 different voltage and current combinations, to railway control center operations.

The new system’s six cassette capacity is a two-slot upgrade over Bel’s prior LRS MK007 Series. This roomier LRSA series offers single or dual output voltages from 12 to 60 VDC. Total output power of up to 1500 W is possible, with the system able to operate from input voltage ranges of 90 to 264 VAC at 50 to 60 Hz.

“With this new system, railway system operators can decrease outages, and operate safely and seamlessly in harsh conditions for years to come,” said Bel Fuse President and CEO Daniel Bernstein.

As mentioned, the LRSA Series employs up to six of the company’s LR2320-9 and LR2540-9 Melcher AC-DC power cassettes in combination to achieve desired outputs. 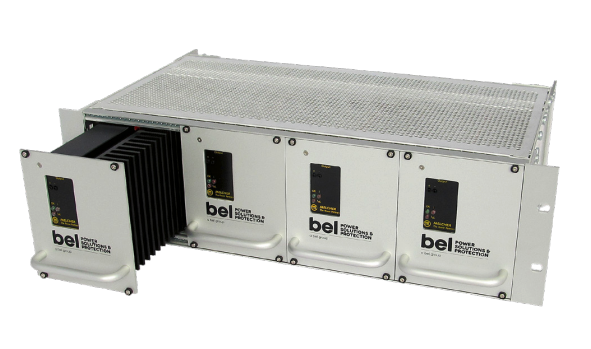 Isolation allows each output to be connected in series or parallel, to double output voltage or power.

As described, users of the LRSA Series can populate the chassis in a manner consistent with their needs. Here are three examples: