The new devices are aimed at data center applications and supply 12 VDC at output powers ranging from 1.5 to 3.2 kW 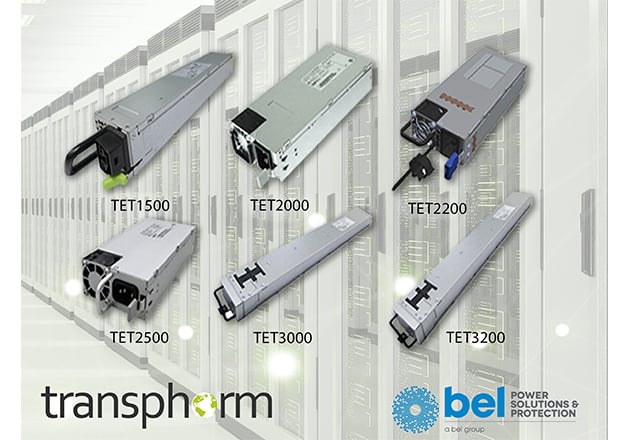 Summary of Specifications for the new power Supplies

All members of each of the six series achieve 96 percent efficiency or better at high line with a main output of 12 VDC. Thus, each PSUs has earned an 80 Plus Titanium rating.

What it means is that for a 230 volt input, PSUs achieve the following efficiency levels.

Gallium Nitride is changing the way Data Centers are Powered

GaN enjoys fundamental advantages over old-school silicon devices. Transphorm’s GaN FETs, as an example, can enable the efficiencies of  AC to DC power factor correction (PFC) stages to more than 99 percent. This means greater power in the same-sized PSU, for great improvements in power density.

Greater efficiency also means less generation of troublesome heat, which can compromise reliability. The units described in this article feature a FIT of less than 1.0, or less than one failure for each one billion hours of real-world use.

The Partnership between Bel and Transform

A synergistic alliance between a GaN semiconductor producer and a manufacturer of power solutions makes it possible to produce a superior product.

According to Ian Warner, Business Development Manager, Bel Power Solutions, “We’ve been designing with Transphorm’s GaN for more than six years now. The efficiency and reliability we’ve been able to achieve to date has helped us create the TET family of supplies that are exceeding customer expectations with an unparalleled solution. We’re changing what’s possible in data centers and Transphorm is a contributor to that movement.”

As per Philip Zuk, VP of Worldwide Technical Marketing and NA Sales at Transphorm, “We’ve seen high voltage GaN positively disrupt industries over the past few years” He goes on to say that, “The data center market is next. Transphorm’s technology performance is proven in excess of 10 kW in various applications. Our device cost is driving down closer to silicon with each generation. And, we set the industry benchmarks for quality and reliability. We’re unsurpassed in that area, making our GaN devices an optimal choice for data center solutions.”