After a banner year in 2021, renewable energy mergers and acquisitions appear to have slowed. Here are some of the trends leading today’s M&A landscape.

Here, we’ll profile some of the most notable trends dominating today’s environment for mergers and acquisitions in the renewable energy space.

Mergers and Acquisitions in 2021

Before unpacking the latest trends around renewables, let’s consider the broader context: Across most industries, global M&As reached an unprecedented high in 2021, thanks to low interest rates, easy access to capital and the post-COVID turnaround. Mega-deals remain historically high in 2022, but recent volatility sent global M&A volume plummeting by 26% in the second quarter, per data from PitchBook. Corporate merger announcements have also slowed.

A report from Boston-based consulting firm Bain found that energy transition deals—involving companies developing technologies for the global transition to renewables—accounted for about one-fifth of all energy sector deals over $1 billion last year. Bain predicted that in 2022, more companies would use deals to grow their environmental, social and governance (ESG) assets, build integrated value chains and invest in startups with disruptive technology.

Another report from Washington, D.C.-based advisory firm FTI Consulting found that the M&A landscape was led by established technologies such as utility-scale solar and distributed storage. The most prolific trend in 2021, though, was the increase in developer platform acquisitions by financial investors.

FTI also projected that the same forces that drove last year’s growth would continue into 2022, particularly in solar, wind and other energy production assets.

Solar Deals Down in First Half of 2022

According to a report from BMI Mergers & Acquisitions, M&A deals in the solar market fell 24% in the first half of 2022. That slowdown might not last for long, though, as deal activity remains in line with past trends and reflects previous uncertainty tied to pending legislation promising clean energy incentives and tax breaks.

Solar developers topped the list of acquirees in the first and second quarters of 2022, accounting for nearly 24% of all deals (up 8% from the same period last year). Meanwhile, manufacturers were the most active buyers, claiming 23.5% of M&A transactions (up 17% year-over-year).

A breakdown of solar acquirers and acquirees in the first half of 2022. Image used courtesy of BMI Mergers & Acquisitions

Despite the overall downturn, there were still some noteworthy deals through mid-2022: For example, solar roofing firm Harness Power acquired installation provider LarSun for $2.5 million, and large-scale solar developer Borrego sold its development business (including over 8.4 gigawatts of solar and 6.4 gigawatts of energy storage) to ECP.

Energy Storage and EV M&A Down

According to S&P Global Market Intelligence, global M&As of energy storage and EV companies plummeted to $7.7 billion as of August (down from $81.8 billion in 2021 and $31.4 billion in 2020). The electric vehicle market was hit particularly hard due to a sharp decline in special purpose acquisition company (SPAC) deals, which had been a major trend in 2021 as EE Power covered with players such as Solid Power and Navitas Semiconductor (both valued at over $1 billion). 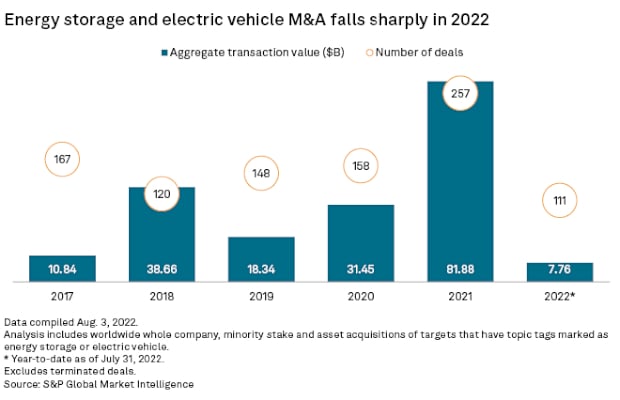 Mergers and acquisitions in the EV and energy storage space have plummeted in 2022. Image used courtesy of S&P Global Market Intelligence

Still, this year has seen some notable SPAC activity so far. One was a $288 million reverse merger between Novus Capital Corp II and grid-scale energy provider Energy Vault, with the latter going public on the New York Stock Exchange last February.

Meanwhile, renewable energy’s counterparts in the oil and gas market are seeing high levels of dealmaking, according to PitchBook, primarily due to industry consolidation and cash from high energy prices. Many are using M&As to expand their renewable assets and production capacity.

Aiming to broaden its U.S. footprint, French oil giant TotalEnergies acquired SunPower Corp.’s commercial and industrial solutions unit in February for $250 million. The deal will help TotalEnergies add over 100 megawatts of capacity per year, assisting with its target of adding 4 gigawatts of solar by 2025.

In June, oil giant Chevron acquired Iowa-based biofuel producer Renewable Energy Group for $3.15 billion in a bid to transition the company into one of the leading renewable fuels providers in the U.S. Chevron said the deal would help expand its renewable fuels business and reach its target of 100,000 barrels per day of renewable fuels production capacity by 2030. The company said combining Renewable Energy Group’s feedstock capabilities with its fuel distribution network would help it become a leader in alternative fuels.