Pulling carbon dioxide from the atmosphere is a possible path to a net-zero world.

Wind and solar power, electric vehicles (EVs), and a transition of commercial and home heating along with industrial processes to zero-emission technologies are all crucial to reducing carbon dioxide (CO2) levels in the atmosphere. CO2 acts as a greenhouse gas, increasing the global temperature as it traps heat in the ocean of air surrounding the planet. 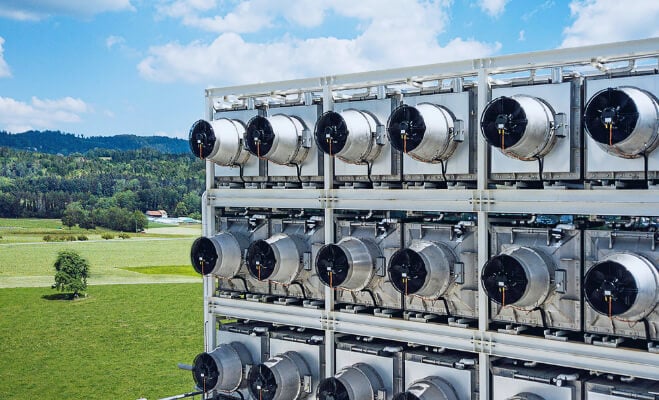 Billions of Tons of Carbon Dioxide

Even with the signing of the Paris Agreement in 2016, which was designed to severely limit CO2 emissions worldwide and keep the temperature rise by 2100 to less than 1.5°C (2.7°F), we are far from meeting any of its requirements, and temperature rises of between 2°C and 3.7 °C are well within the realm of possibility.

The UN Environment Programme says carbon emissions must drop by 25 percent before 2030 to keep increases within 2 degrees by 2100, and there must be a 55 percent reduction before 2030 to limit the increase to 1.5 degrees.

According to the Intergovernmental Panel on Climate Change (IPCC), the efforts in decarbonization may not be enough to prevent widespread cataclysmic changes to the Earth’s climate. To meet the goals, in 2050, we must begin to remove between 2 billion and 20 billion tons of CO2 yearly from the atmosphere if we are to limit warming to 1.5°C  by 2100. Any increase above 1.5°C places us in the danger zone.

On one hand, removing carbon dioxide directly from the atmosphere seems simple. Trees and plants do it using sunlight every day through the process of photosynthesis. A tree (or nearly any plant) takes carbon dioxide from the air, and, using energy from sunlight, strips away the oxygen (which it releases back to that atmosphere) while using the carbon to build organic structures like leaves, stems, branches, trunks, and roots. Indeed, planting more than a trillion trees is a strategy to try to help remove CO2 from the atmosphere. Unfortunately, the IPCC says that won’t be enough and a variety of technologies are under development to build machines that can remove carbon dioxide directly from the air around us. Called direct air capture (DAC) the goal is to extract CO2 from the atmosphere in vast quantities and then safely sequester or store it away for millennia.

Projects to remove CO2 from the smokestacks of fossil-fuel power plants are already underway (so-called clean coal is an example). In many ways, the challenges presented when the CO2 is at a high concentration at a power plant are significantly easier to meet than it will be to remove the carbon in the atmosphere at a concentration of 415 ppm. To do so at scale will require large amounts of energy to be consumed in moving vast quantities of air through the CO2 capture material. Unless this energy comes from renewable sources, its generation from fossil fuels can produce more total carbon emissions than DAC can remove from the atmosphere.

At present, there are two leading technologies for capturing carbon dioxide. In the liquid system, air passes through a hydroxide chemical solution that combines with the CO2 forming a precipitate. The precipitate is then heated to high temperatures to release a relatively pure stream of carbon dioxide while the hydroxide can be recycled for further use. The solid DAC technology uses a chemically treated filter that reacts and holds the CO2 molecules. The filters can be placed into a vacuum and heated to remove a stream of CO2 and the filters can then be reused. In liquid and solid technologies, significant energy is required to heat the materials and release the CO2.

Once a stream of nearly pure CO2 has been generated by the DAC capture system, something must be done with it. The first step is usually to compress the gas (requiring more energy) so that it can be sequestered by being injected deep underground for geologic storage. This is the solution that proponents of DAC most frequently describe as it (more or less) permanently removes carbon dioxide from the atmosphere.

The reality is something different. While some of the captured carbon dioxide can be used for industrial processes or the creation of low-carbon synthetic fuels, much of the carbon captured by DAC is used for enhanced oil recovery—CO2 is injected underground to free additional oil from petroleum wells that have no longer producing oil fast enough. During this process, the captured CO2 is returned to the atmosphere,  helping create more fossil fuels that will deliver ever-increasing amounts of carbon into the environment. The result is that not only is significant energy required to extract the CO2 via DAC but the resulting carbon dioxide is used to produce even more carbon emissions.

DAC hasn’t been quick off the mark. Worldwide, there are 19 DAC plants in operation, and altogether, they capture about 0.1 metric tons (Mt) of CO2 per year. Considering that to meet the needs of almost any net-zero by 2050 plan, the amount of carbon capture per year in 2030 will need to be 85 Mt and at a level of almost 1,000 Mt by 2050, the scale-up seems almost impossible to imagine.

Most DAC experts agree that reaching a level of $100 per ton of carbon dioxide will require new technologies and dramatic improvements in the existing techniques, as well as an enormous scale-up of the carbon capture industry. Even then, DAC is being looked at primarily to offset the 10-20 percent of energy usage like aviation which will be difficult to fully decarbonize.

One company in North America that is working on DAC is Carbon Engineering. The Canadian company is working with a U.S. company called 1Point5 to build a DAC facility in the oil-producing Permian Basin expected to capture up to 1 Mt of CO2 per year when it becomes operational in 2024.

The facility will use a liquid capture technology with air passing over a potassium hydroxide solution, trapping the carbon dioxide as a carbonate precipitate. The precipitate is pelletized and then heated to remove the CO2 and the pellets are recycled for reuse to capture more carbon dioxide. Occidental Petroleum, a partner in the venture will use the captured carbon dioxide for enhanced oil recovery.

DAC has become a darling of politicians and oil company executives. It sounds simple to pull carbon dioxide out of the air and doing so on a grand scale would mean that we wouldn’t need to relinquish our hold on fossil fuels for decades to come.

Unfortunately, it isn’t simple, it requires huge amounts of energy, and for the moment at least, its most important usage is to help pump even more fossil fuels out of the ground.

The IPCC might be right, and DAC might be a critical step to reaching a net-zero future but to do so requires scaling up a process that is just in its infancy and being serious about finding ways to store CO2 or uses for the captured gas that doesn’t include using it to extract more fossil fuels.