Learn about common mode noise, sources of CM noise, and how local DC-DC converters could potentially eliminate these issues.

In the realm of audio amplification, in the home and workplace alike, we won’t generally tolerate any peripheral background noise. The mains hum from random noise sources and the occasional buzz from the high frequencies generated by switching circuits are all deemed unacceptable but can be difficult to eliminate in reality. The issue hasn’t gone away with the arrival of digital audio, as any offending hiss starts from an analog source – like an instrument or microphone somewhere in the system. This means that any unwelcome signal at the front end gets authentically replicated, whether it’s a sneeze from the audience or the mains hum of a badly regulated supply rail.

What is Common Mode Noise?

Despite the many techniques used to reduce electrical noise such as the filtering of Dc supply rails, shielding, precise grounding, and balanced lines, one area that often proves challenging for audio engineers is the pick-up of Common Mode (CM) noise. CM sources contribute noise to the audio line and return related to a local ground which might, itself, be offset from true ground by unspecified Ac and Dc levels. However, with their proclaimed Common Mode Rejection Ratio (CMMR), audio amplifiers can eliminate the CM signal up to a point. With a level of 60 dB regarded as typical running performance, the surplus voltage can be reduced by a factor of 1,000, appearing at this level as an audible differential signal. This may appear to be good, but since we have come to anticipate a dynamic range of some 100 dB, even in home entertainment systems, a 1 V CM spike together with a 1 V maximum differential signal will generate a crackle of 40 dB or 100 times louder than even the quietest intended signal; and if you consider that humans can perceive loudness at a starting point of 0 dB, then 40 dB feels pretty intrusive (see figure 1). 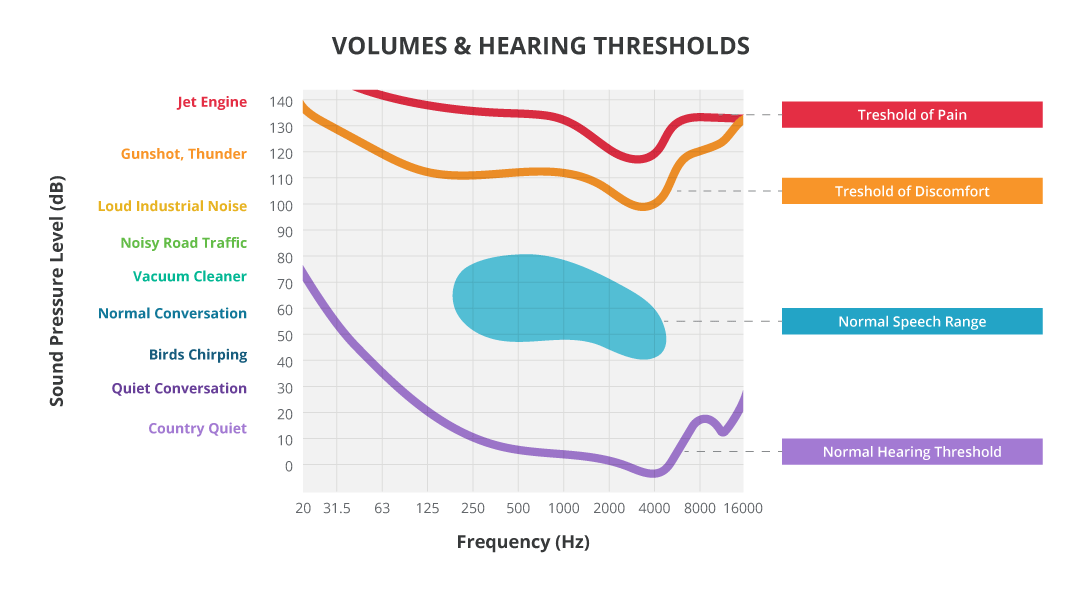 A major contributor of CM noise is Dc supply rails to audio stages and while there is concern around ground loops causing specific complications in audio applications, it is commonplace that supply rails are not connected to a solid ground near an audio pre-amplifier. This permits supply rail CM noise to be present. Dc supply rails are generally produced by switched-mode power supplies (SMPS), to decrease size and increase efficiency. However, even though they are tracked by local linear regulators, this often isn’t enough to offset the CM noise produced by the switcher, resulting in that familiar hum and buzz. 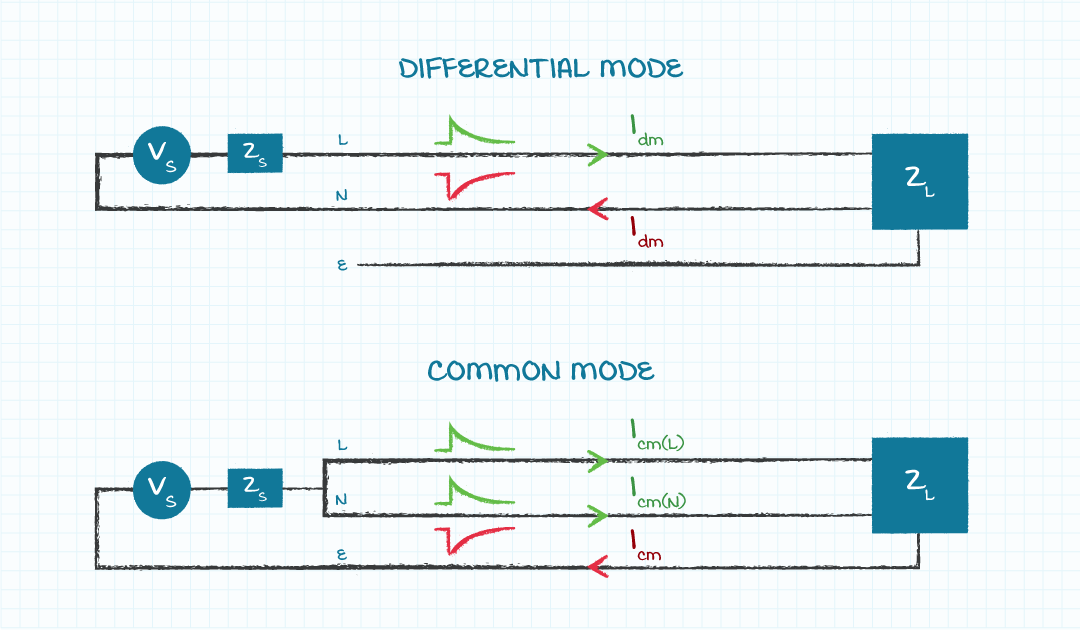 Why does an SMPS produce common-mode noise? The effect is the outcome of rapid voltage changes at the circuit’s switching nodes, which propels current through stray capacitances into the local input and/or output ground or power return. This causes a jump in voltage at the connection owing to its self-impedance.

Figure 2 shows a characteristic route in an outline Ac-Dc converter indicating where the drain of the switching transistor Q1 switches between 0 V and several hundred volts at high frequency, as follows: 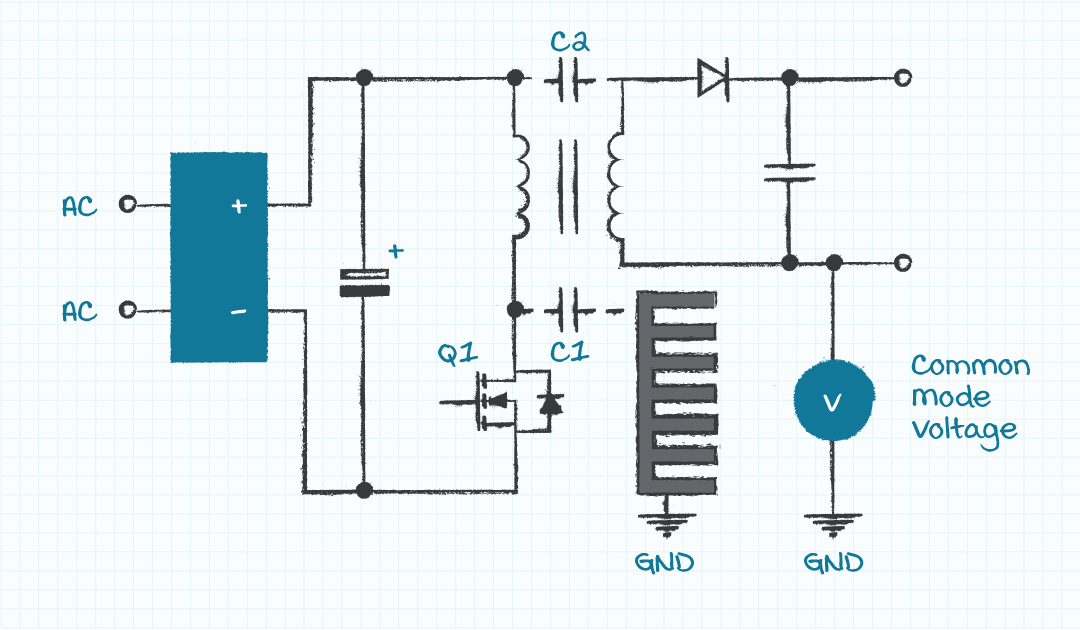 It makes sense to avoid letting current into stray capacitances and you can take steps to minimize it, like inserting a grounded screen into the SMPS transformer. Conversely, by doing this, safety considerations can be made harder to achieve. It can also prove physically unworkable, particularly where toroidal transformers are concerned. It’s possible to put common mode chokes into power lines, however, you can risk degrading regulation and can end up shifting the problem somewhere else. Another option is to insert spacing to minimize the transformer interwinding capacitance, but this can produce leakage inductance, amplifying stress on components and impacting efficiency in the process.

In a problem like this, where the scale of the leakage capacitance can be up to hundreds of pF for larger system power supplies, one smart solution is to utilize a separate, locally placed, isolated Dc-Dc converter with extra-low coupling capacitance powered from a system voltage. This will deliver the comparatively low power requirements of the sensitive analog audio stage. CUI’s VQA series range has a part with a +/- 9 V output, which is an ideal candidate with the rated 1 W of output. 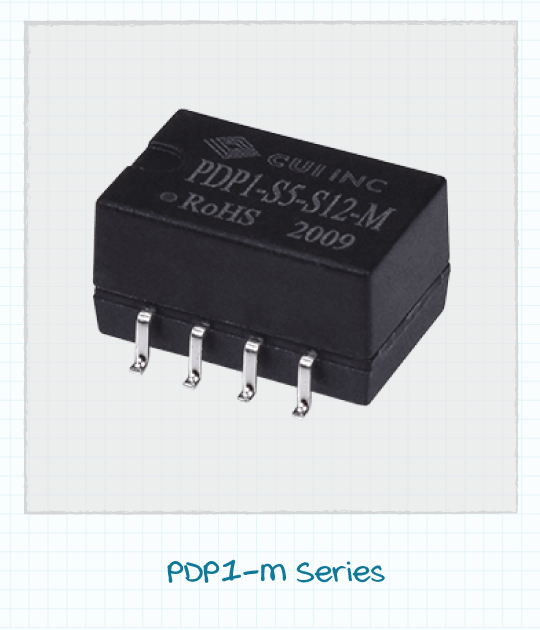 With a coupling capacitance at just 6.6 pF, maintaining common mode current to a very low level is achievable. In addition, several of the smaller-sized regulated and unregulated isolated Dc-Dc converters in CUI’s portfolio are potential solutions in such applications. For example, the PDP1-M Series has a coupling capacitance considerably lower than those seen in larger Ac-Dc supplies.