Understanding the Characteristics of a Motor Emulator

Understanding the Characteristics of a Motor Emulator

Various types of motors are employed in a wide range of applications, from small home appliances to large industrial systems.

Motor emulators are used to accomplishing close-to-reality validation for all such applications. Key advantages of using a motor emulator instead of an actual physical device in such applications include the complete elimination of rotating parts and replicating the motor behavior over all four quadrants on the phase level.

Also, the system can be tested for different load conditions under unbalanced voltages, which could help fine-tune the controller gains for effective operation. Read on to learn more about what a motor emulator is and how it works.

Motors are employed in a wide range of industrial applications ranging from heat pumps, compressors, conveyor belts to traction and lift. To be able to test the motor under diverse conditions of high heat, either during the starting or during the deceleration, a stress test needs to be conducted where the emulator plays a critical role [2]. The basic need for motor emulation is the observation of steady-state and dynamic characteristics. Another area of application is in electric vehicles. The motor, along with the traction inverter and the battery setup, can be emulated under power hardware-in-the-loop (PHIL) or a computer simulation setup [3].

Several tests can be carried out to verify the feasibility of integrating multiple components in complex systems. This is critical to reaching the product development stage and is especially helpful for studying the system performance under different dynamics while facilitating the development of suitable control strategies. The main advantage of using the motor emulator is its ability to incorporate multiple motor characteristics based on the user-defined criteria without damaging the actual hardware setup. It enables studying system characteristics under fault conditions and can operate under different operating areas to analyze system stability.

Characteristics and Advantages of a Motor Emulator

Electronic emulators avoid the need for conventional inverter tests using physical systems and actual mechanical components. This technology eliminates the need for all the rotating parts entirely but still replicates the exact behavior of the motor over all four quadrants in a simplified manner at full power level. Along with emulating the electric motor by itself, the torsional behavior of the mechanical drive train components is also emulated. This also supports fault simulation, production tolerance simulation, and tests at all the speed ranges.

The motor emulator mimics the four-quadrant electrical output of a three-phase synchronous or induction motor or generator under user-controlled voltage or speed, inductance, torque, and temperature conditions (thermal variations), thus simulating an electric drivetrain [4]. This also supports multiple motor and generator characteristics in a single set of hardware. User-defined criteria help distinguish the unique machine types, including but not limited to induction and permanent magnet-based machines.

The power is typically recirculated between the electric motor emulator and inverter under test, thus eliminating the cost and complexity. The setup also enables operation under extreme operating conditions in a safe mode without harming the test equipment or the inverter irrespective of a high rate of change, over-speed, or continuous overload conditions [4]. The compact size, scalability, and small footprint of the emulator facilitate installation in a laboratory or other test facilities with minimal exhaust heat. 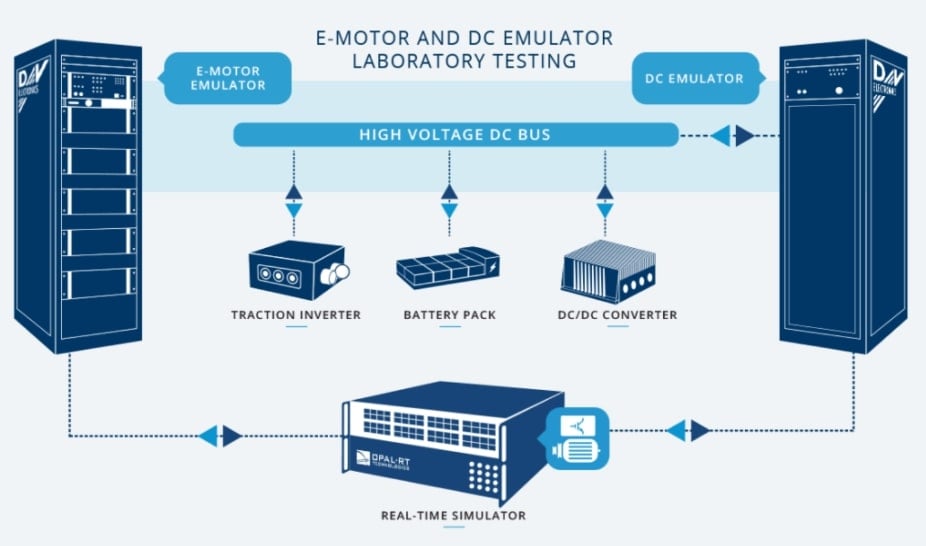 The electric motor emulator serves as a standalone inverter test solution that is lab safe, ideal for validation, endurance, and production testing purposes. The internal motor models can typically be configured with drive cycle simulation. It also supports selectable digital and analog control outputs for providing system information, including motor characteristics that are not available from actual motors. It helps in circulating the AC or DC power between the electric motor emulator and the inverter with minimal facility requirements. It can test over-speed, burst, and locked rotor conditions at low operating cost and small footprint [4]. Ultimate flexibility is provided by utilizing the motor emulator setup as it is scalable, reconfigurable, and relocatable with great ease. The control of the setup can be accomplished using a PC or test automation system, thus enabling remote operation. 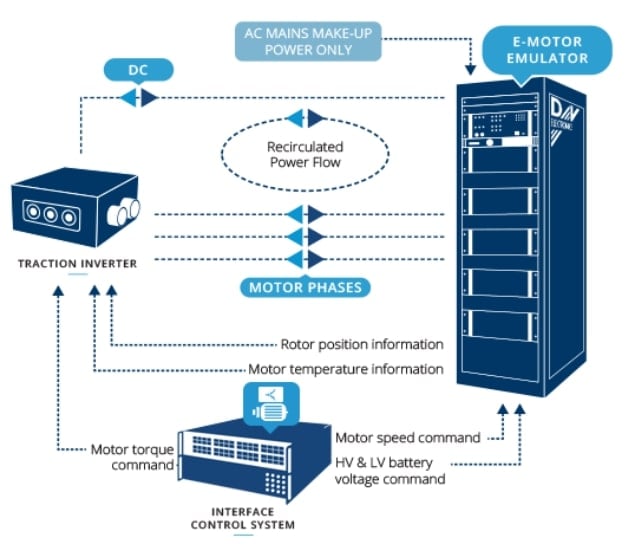 The setup allows for emulating a synchronous permanent magnet or an induction motor, three-phase per emulator, and up to six-phase for dual emulator connection. The nuances of input/output controls, commands, and recirculated power flow in the motor emulator setup are illustrated in Figure 2 [5].