This article discusses the main features which make the IGCT an attractive option for high power applications with respect to the technology developments.

In this article, we review the progress made recently for further developing the Integrated Gate-Commutated Thyristor (IGCT) device concept for high-power electronics applications. A wide range of newly introduced IGCT technologies is discussed and recent prototype experimental results as well as novel structures and future trends of the IGCT technology are presented.

The IGCT has been established as the device of choice for many high power applications such as medium voltage drives, STATCOMs, and pumped hydro [1, 2]. Today, IGCTs have been optimized for current source inverter (CSI) and voltage source inverter (VSI) applications with state-of-the-art devices having voltage ratings ranging from 4.5kV up to 6.5kV and are today available as Asymmetric, Symmetric (Reverse Blocking), and Reverse Conducting devices (see Figure 1). 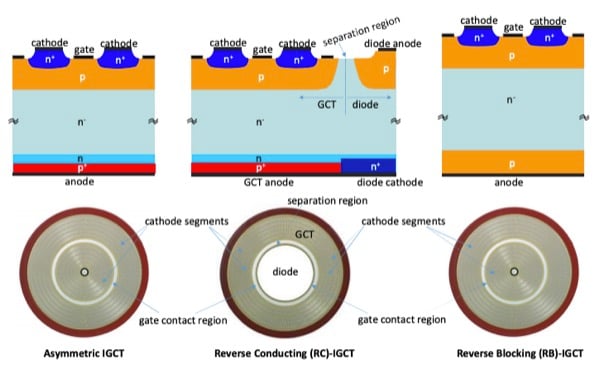 Figure 1: State-of-the-art IGCT device types and their schematic cross sections from top side to bottom side (vertical cross section).

For VSI topologies, the Asymmetric IGCT has the highest power level for a given wafer size while the Reverse Conducting IGCT (RC-IGCT) provides compactness by integrating a diode on the same GCT wafer [3, 4]. Inherent to the IGCT concept, the gate unit is critical for the device switching performance and is therefore an integral part of the device for proving a low inductive gate path. The hermetic press pack design of the IGCT has for years proven its reliability in the field with respect to device protection and load cycling capability.

Therefore, the IGCT is the ideal device of choice for many high-power electronics applications due to its thyristor like conduction, transistor like turn off and hermetic press-pack design. It can be seen from Figure 2 that the IGCT has clearly a better technology curve (turn-off losses vs. on-state voltage) compared to the IGBT, i.e. for the same turn off losses, the on-state voltage drop is close to half in the IGCT compared to an equivalent IGBT. However, IGCTs need a clamp circuit to protect the antiparallel diode from high power failures in the circuit topology and this clamp circuit contributes to additional losses during switching. 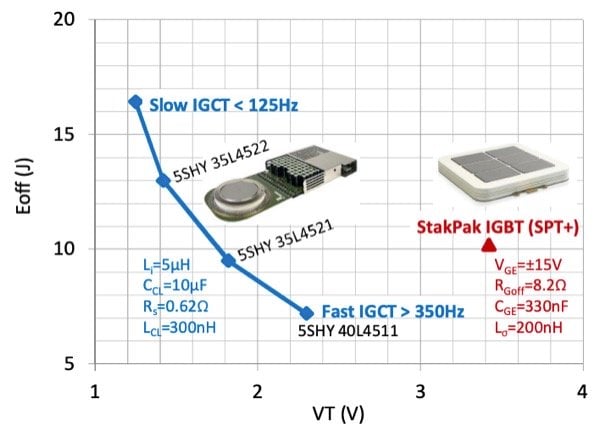 Figure 2: Technology curve comparison between 4.5kV Asymmetric IGCT and StakPak IGBT module at 2.8kV, 2kA, 125°C. The active area is nearly the same for both the devices.

In the past 10 years, the IGCT technology has experienced major development trends to further exploit the main advantages in terms of lower conduction losses and higher power densities offered by this device design/process concept. Fig. 3 shows a basic illustration summarizing the basic IGCT performance trends for achieving higher power densities with new technology platforms. The increase in power has been divided into two categories, the first is related to an increase in power density through lower losses and/or higher operating temperatures. Furthermore, the main enabling factor for achieving these trends is linked strongly with a high current turn-off current capability for increasing the safe operation area (SOA) of the device. The second trend targets an increase in absolute power by either an increase in device size from the state-of-the-art 91mm to 150mm and/or through integration concepts which in principle provides the full targeted functionalities as per application requirement with a single wafer device instead of employing two devices (IGCT and diode). 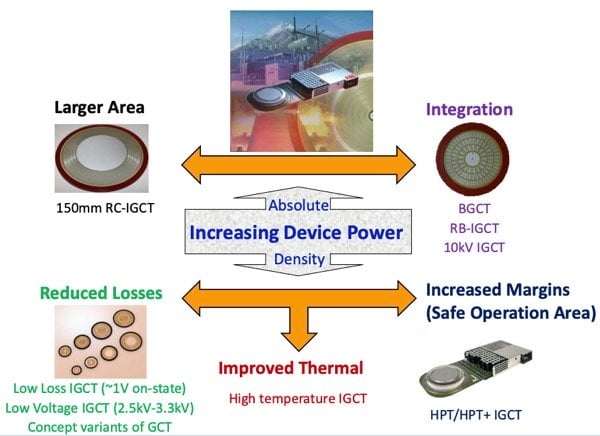 In this article, we will discuss the main features which make the IGCT an attractive option for high power applications with respect to the technology developments outlined above. Each of the technology platforms will be presented with regard to the device design and targeted performance while providing the results from fabricated prototypes.

The main limiting factor to conventional IGCTs has been related to the maximum controllable turn-off current capability and not due to losses or thermal constraints. Therefore, the introduction of the High Power Technology (HPT) platform [5] is hailed as a major step for improving the IGCT SOA performance while providing an enabling platform for future development trends as discussed below. The HPT-IGCT gives an increase in the maximum turn-off current of up to 40% at 125°C (see Fig. 4), incorporating an advanced corrugated p-base design compared to a standard uniform p base junction that ensures controlled and uniform dynamic avalanche operation with better homogeneity over the diameter of the wafer during device turn-off. 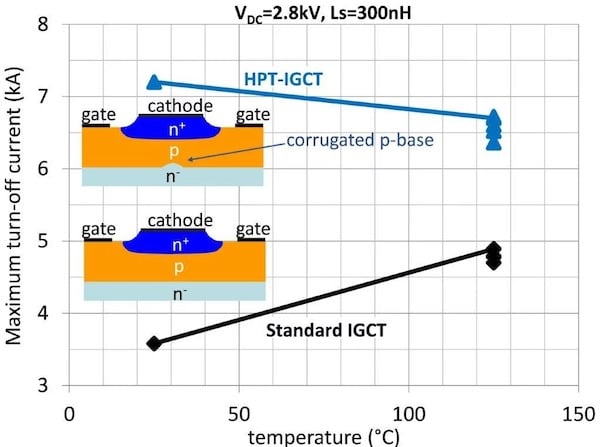 In certain applications such as the solid-state DC breaker and CSI, a symmetrical blocking switching device is required. Although this technically could be accomplished by using an Asymmetric IGCT connected in series with a fast diode, the preferred solution is a Symmetric IGCT in a single wafer. Since the required performance and some modes of operation are different from the other IGCT, device design optimization is needed to achieve the reverse blocking performance along with low losses and robust switching performance. Both 6.5kV RB IGCTs [6] for CSI applications and 2.5kV RB IGCTs [7] for bi-directional DC breaker applications have been developed. The results of a 91mm, 2.5kV RB-IGCT prototype show the achievement of an on-state voltage drop as low as 0.9V at 1kA, 125°C while maintaining a very high maximum controllable turn-off current capability of 6.8kA at 1.6kV, 125°C.

It is possible to make a 3-level inverter without series connection for line voltages of 6kV – 6.9kV if IGCTs with a voltage rating in the range of 8.5kV – 10kV were available. These high voltage devices offer several advantages such as simple mechanical design, less control complexity and high reliability compared to series connection of two 4.5kV or 5.5kV devices for line voltages of 6 – 6.9kV. Therefore, 10kV rated devices have been manufactured with the HPT platform to prove the feasibility of higher voltage ratings for IGCTs [8].

A feasible way to increase the output power of an existing converter design is to increase the temperature rating of the used power semiconductor device. To accomplish this, a number of improvements to the HPT IGCT are being implemented such as optimized corrugated p-base design and improved metallization, with the goal of increasing the operating temperature up to 140°C. The prototype results show that the HPT+-IGCT has a clearly improved technology curve compared to HPT-IGCT due to its optimized corrugated p-base design [9].

In recent years, there is a clear trend towards using multilevel topologies in many power electronics applications. These converters are operating at fairly low switching frequencies but at the same time they require high current carrying capabilities and/or high efficiency. Due to its inherent low conduction loss thyristor properties and the hard switched functionality, the IGCT is predestined for these applications. The simulation and experimental results show the feasibility of designing through “anode engineering” a wider range of high voltage IGCTs (2.5kV up to 6.5kV) with very low on-state losses (i.e. on-state voltage values close to 1V) even at higher currents while maintaining good overall performance [10].

The quest for ever-growing power ratings makes the option of expanding into larger silicon diameters viable. Compared to the previous technology, the HPT has an improved scalability that enables the design of devices beyond the standard 91mm wafer size IGCT products that are available today. The first 150mm Reverse Conducting 4.5kV IGCT prototypes based on HPT+ technology have recently been manufactured and a prototype with gate unit is shown in Figure 5 along with the SOA turn-off waveforms in GCT-mode [11]. With this device, it will be possible to make 3-level inverters up to about 20MW without the need for series or parallel connection of power semiconductor devices. 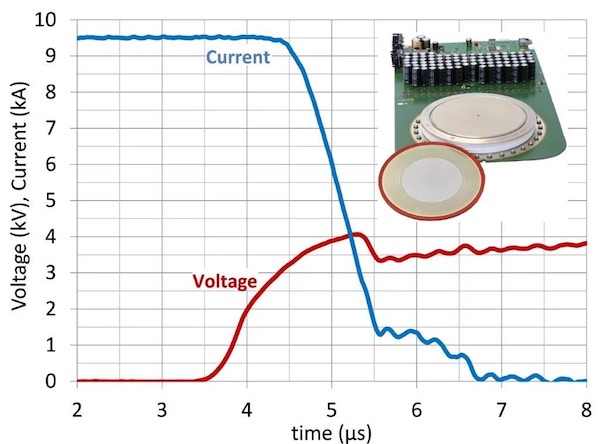 The conventional RC-IGCT enables better component integration in terms of process and reduced part count at the system level, therefore improved reliability. However, in a RC IGCT the GCT and diode are integrated into a single wafer but they are fully separated from each other (see Figure 1). Consequently, in the RC-IGCT, the utilization of the silicon area is limited in the GCT region when operating in GCT mode and in the diode region when operating in the diode mode. The BGCT, on the other hand, features an interdigitated integration of diode- and GCT-areas (see Figure 6). The BGCT has the following advantages over conventional RC IGCT:

The BGCT concept has been demonstrated first experimentally with 38mm, 4.5kV devices and the results confirm the potential advantages of the BGCT over conventional RC IGCT [12]. 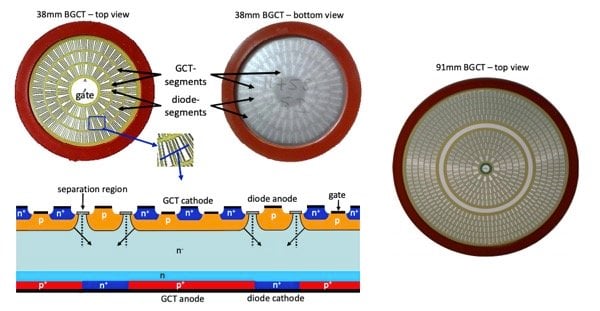 A number of IGCT concept variations were proposed and demonstrated to reduce the switching losses of the IGCT such as the Integrated-Gate Dual Transistor (IGDT) and Dual GCT. The IGDT eliminates tail losses thereby switching losses can be reduced significantly compared to conventional IGCT [13]. One the other hand, the concept of the Dual GCT is to integrate monolithically two GCTs on a single wafer, in which one is optimized for low conduction losses and the other one for low switching losses to improve the performance of the device compared to a single IGCT [14].

Umamaheswara Vemulapati worked as a Senior Scientist at ABB Switzerland Ltd. since October 2013. He was promoted and now works as the Principal Engineer since February 2019 at ABB located in Lenzburg, Switzerland.

Munaf Rahimo works as the Corporate Executive Engineer at ABB Switzerland Ltd. He is a power semiconductor expert with more than 25 years of experience in the field of power electronics devices and applications. He is also skilled in the field of research and development, as well as product development. He holds both a Master's Degree in Electrical and Electronic Engineering and a PhD in Power Semiconductors both earned as Staffordshire University. He also holds an MBA Degree in International Business from SBS Swiss Business School.

Tobias Wikström works as a Project Manager at ABB Schweiz AG since July of the year, 2005, where he is responsible for the management of product development projects for bipolar power semiconductors and typical R&D projects including silicon; package, manufacturability, and electrical design; and reliability testing of products. He holds a Master's Degree in Material Physics from Uppsala University located in Sweden. He also has a PhD in Electrical Engineering in which he earned at ET Zürich, a science, technology, engineering and mathematics university in the city of Zürich, Switzerland.