During a press briefing in Grenoble, Laurent Monge, President and Site Director, Evelyne Tur and Thierry Bissuel, Business Unit Directors, and colleagues gave an interesting update of the data and signal processing as well as the integrated microelectronics offerings of Teledyne e2v.

Teledyne, founded in 1960, provides enabling technologies for industrial growth markets. The company with a revenue of around 2.9 billion USD and approximately 11,000 employees serves multiple markets that require advanced technology and high reliability. Business is growing through new technology development and acquisitions; e2v in Grenoble, France, founded in 1955, with an annual turn-over of around 140 M Euros and 400 employees (200 engineers) was acquired in March 2017 to create Teledyne e2v, which i.a. is a leading European competence center for System in Package (SiP) solutions.

Teledyne e2v’s innovations lead developments in healthcare, life sciences, space, transportation, defence and security and industrial markets. It is a world leader in reengineering and up-screening commercial technologies and has held a strategic partnership with NXP for over 30 years to develop space, military and industrial grade versions of NXPs commercial processors. With access to original test vectors, Teledyne e2v offers guaranteed extended reliability versions of a broad line of the QorIQ Power Architecture based portfolio and is developing solutions based on NXPs Layerscape Series.

In 2015, Teledyne e2v has introduced Qormino, a common computer platform concept ideally suited for the aerospace and defence markets. In 2017, the first lead customers have successfully started their design on the first generation of Qormino. In 2019, leveraging on the success of its space microprocessors, the company will introduce two new disruptive space solutions for LEO and GEO environments (LS1046-Space and QLS1046-4GB-Space).

From the design up to the delivery of the first flight models, Teledyne e2v will continue to guarantee the highest level of quality and reliability for space customers and applications. Teledyne e2v recently has qualified and released the first upscreened processor from NXPs new Layerscape Series, the LS1046A, part of NXPs 64-bit Arm Layerscape portfolio that implements a quad-core Arm Cortex A72 design providing unparalleled performance in the smallest form factor possible while enabling access to the vast ecosystem of software services, applications and tools compatible with Arm technology.

The LS1046A from NXP is a 1.8GHz processor integrating packet processing acceleration with high-speed peripherals and is recognized for its high-performance architecture and market-leading compute density. Offering more than 45,000 CoreMarks of compute performance, paired with dual 10Gb Ethernet, PCIe Gen3, SATA 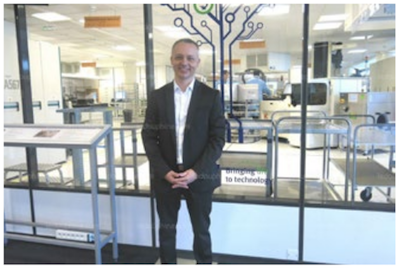 Gen3 it is suitable for a range of high reliability mil-aero applications. The Teledyne e2v military qualification of this device assures its functionality between -55°C and 125°C and is available in both RoHS and leaded packages. In addition, as part of Teledyne e2v’s Semiconductor Lifecycle Management program, SLiM, the lifetime of this device can be supported for 15+ years, avoiding common and costly obsolescence issues.

Processors produced in Grenoble are tailored to support PowerArchitecture (legacy) for the next decades; they are ready for the next steps with ARM based processors, facilitate make/buy decisions with Qormino Common Platform solutions and reduce time to market. Highlights of the Space Microprocessors, available in ceramic and in organic package solutions:

The next Space Microprocessors are to enable increased on-board data processing, a higher level of data selection, higher accuracy level of data transmitted, an increased Quality of Service, increased autonomy and increased observation capabilities – all at an equivalent level of reliability.

The product portfolio covers all bands – the Rx ADCs from base band through L and S to C band with the EV12AQ600 quad channel 6GSPS ADC leading this section, and the Tx DACs up to the Ka band, here with the EV12DD700 dual channel 12GSPS DAC with extended dynamic range in Ka as the newest and most innovative offering. Target applications of the portfolio are

The innovations the company is working for, and their target markets are

b. More frequency bands supported with direct conversion L-, S-, C-, X-, Ku- and Ka, resulting in removal of frequency conversion stages in RF systems plus no intermediate frequencies in the supported bands.

On April 8th this year, Teledyne e2v, Wind River and CoreAVI announced that they will provide key technologies for BAE Systems’ new mission computer. A mission computer is the central hub that processes all mission critical data on an aircraft: Receiving information from various external subsystems, it processes the data and presents it to the pilot on various displays in the cockpit.