The operating environment for mains-powered electrical equipment is separated into four overvoltage category (OVC) areas according to their level of surge protection. This article describes how these four areas differ and how the AC/DC power supplies rated for the OVC II area might be used in the OVC III area in certain circumstances.

Most users of mains-powered equipment are confident that they can simply plug in their device to a convenient socket, and their device will function correctly, safely, and reliably. Stringent and mandatory international standards for power supplies support this notion. Even a modular product embedded within another equipment is required to meet a minimum level of electrical safety isolation and electromagnetic compatibility including immunity to voltage surges and transients.

The fact is, anywhere in the home, office, or factory where the mains power comes from wall sockets, it is likely to provide an environment where the mains power is relatively ‘clean’ without undue voltage transients that could damage the end-equipment. However, as you move progressively back through the infrastructure wiring to a distribution board and then further to the AC supply connection for a building, the possibility of seeing overvoltage from external events such as lightning strikes and load dumps from other installations on the utility network, which are obvious risks, goes on increasing.

OVCs in the Environment

There are applications where single-phase or multiple-phase AC/DC power supplies are permanently wired to central distribution panels, for example, home chargers for electric vehicles or DIN-rail mounting power supplies. In these locations, the more severe transient amplitudes and energy levels require the power converters to have additional overvoltage protection when compared to that required for a plug-in power supply. 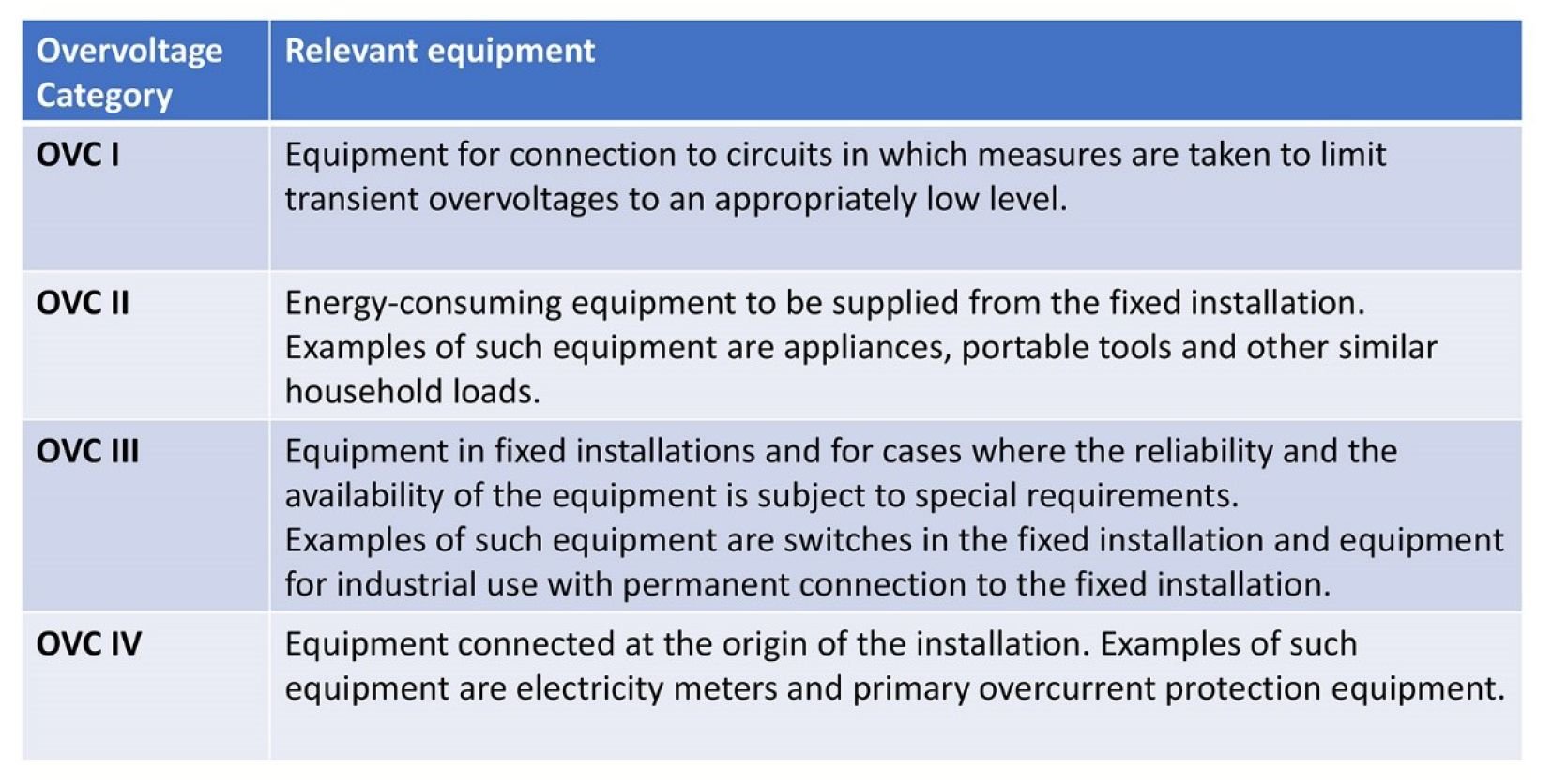 The international standard IEC 60664-1, i.e., ‘Insulation coordination for equipment within low-voltage supply systems’, defines four installation categories labeled OVC I to OVC IV as presented in OVC I relates to powered equipment that is connected downstream from a well-protected isolated supply such as a computer fed with DC by a laptop charger, while OVC IV applies to a power utility’s equipment connected directly to the incoming supply (Figure 1). This means that a majority of the mains-powered equipment within buildings fall into the OVC II and OVC III categories. As a generalization, OVC II includes all domestic, workshop, and office equipment that is fitted with a mains plug and is individually protected by a fuse or circuit breaker. OVC III refers, primarily, to hard-wired equipment fitted inside a switch cabinet or distribution panel such as relays, circuit breakers, and fixed-installation power supplies. 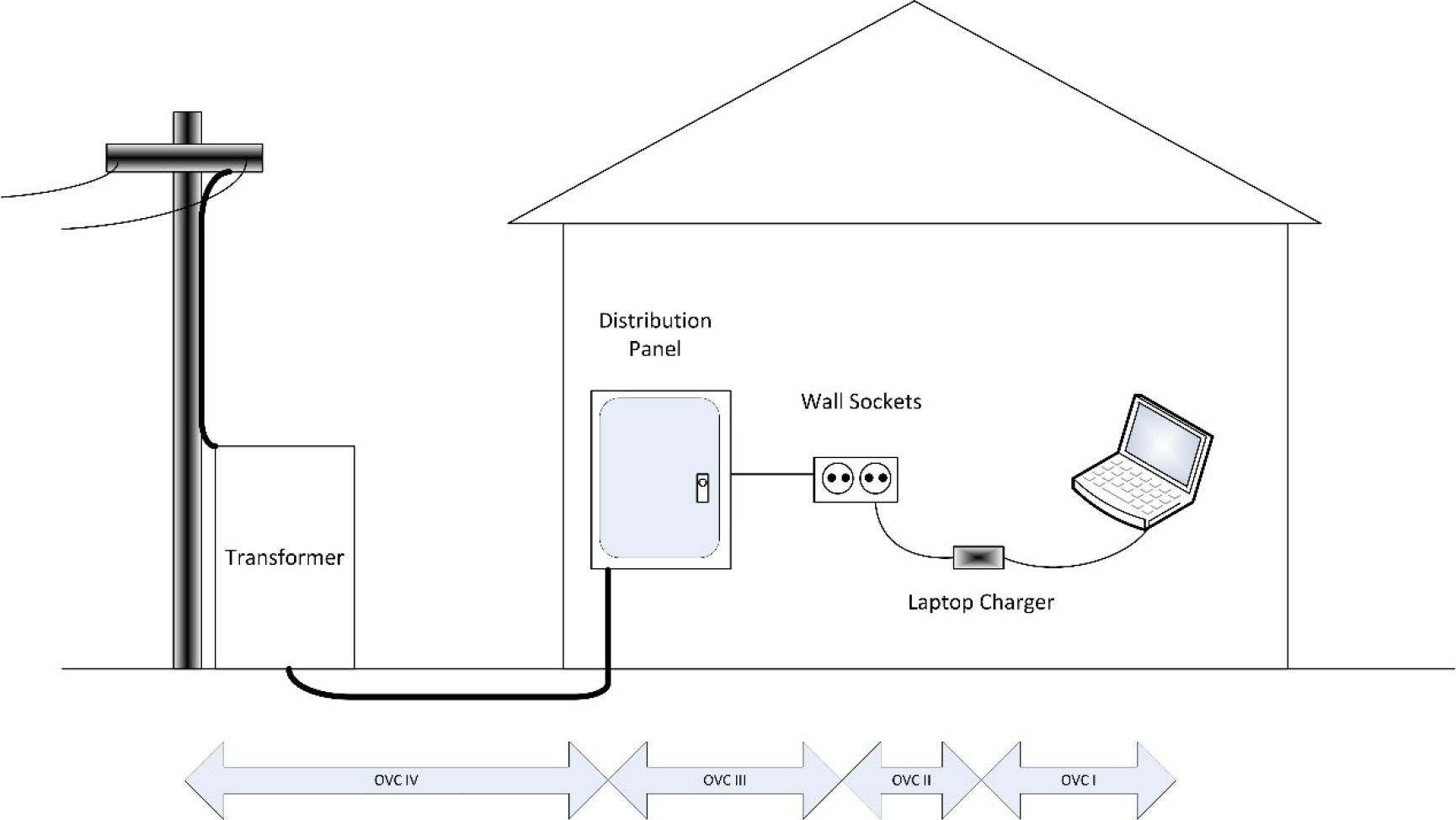 Figure 1: Diagrammatic representation of the OVC IV to OVC I environments

When specifically discussing protection against lightning, the IEC 62305-1 standard defines ‘zones’ LPZ 0 to LPZ 3 that correspond to the OVC areas IV to I. The standard IEC 61643-11 for Surge Protective Devices (SPDs) also ties in with these definitions with the protection device classes I, II, and III, corresponding to LPZ 0, 1, and 2 respectively.

The IEC 61643-11 standard also defines the different test waveforms required to prove the effectiveness of the suppression devices, i.e., a 10/350µs transient that would result from a direct lightning strike and a combined 8/20µs + 1.2/50µs characteristic that would result from an indirect (induced) lightning strike or from atmospheric lightning. A multi-stage suppression system is required to protect against all these different surge events (Figure 2). 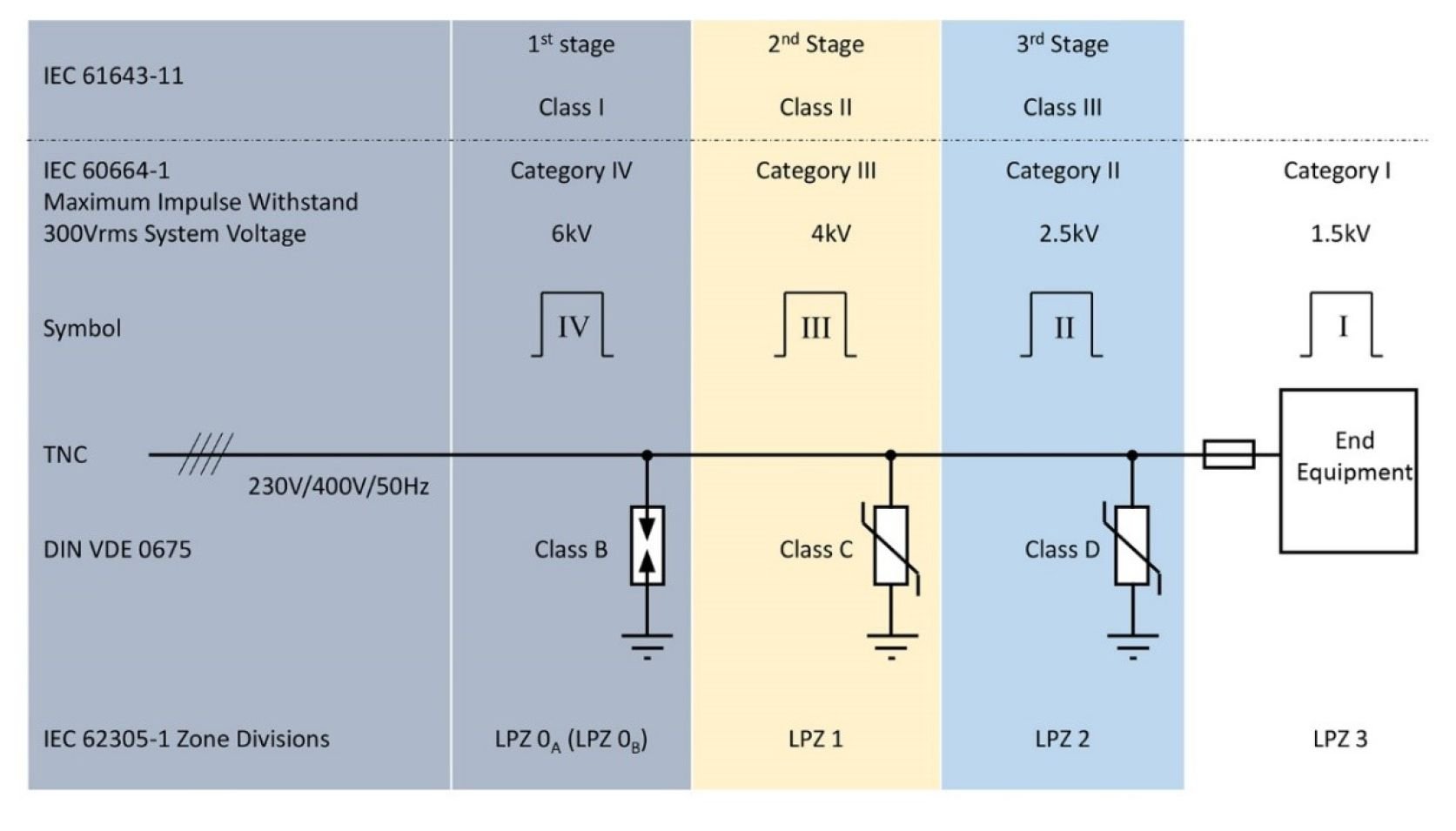 An end-of-life indication (acoustic or visual) to inform the user if the SPDs have been compromised by high energy or repeated lightning strikes is also generally required by these installation codes.

Equipment in different OVCs must withstand different impulse voltages that correspond to the expected transients on the low-voltage distribution network.

IEC 60664-1 includes the following information in this regard (Table 2).

It must be noted that the values in Table 2 are the rated 1.2/50µs peak impulse voltages for basic insulation. For double or reinforced insulation, the next higher voltage category is used. For example, for the 300Vrms OVC II, the reinforced isolation requires a rating for a 4000V impulse voltage.

However, when testing for compliance is carried out, the operational altitude must also be factored in. The impulse test voltage values given in Table 2 are for 2000m, but for lower altitudes, the values increase. Thus, 4000V rated increases to 4923V rated at sea level.

Table F.5 of IEC 60664-1 presents the correction factors in this regard.

On the other hand, the required minimum clearance distances increase at higher altitudes. For example, the altitude correction factor for clearances is 1.00 at 2000m, but it increases to 1.48 at 5000m. Table F.1 of IEC 62109-1 presents the correction factors in this regard.

Power supplies intended for OVC III areas need enhanced specifications for withstand voltages and clearance distances compared to the more common OVC II rated types. These could be met with a preceding isolation transformer to reduce transients to OVC II levels, but this is often an unwieldy and expensive solution. A better solution is to design the power supply such that it can be directly connected to the supply in an OVC III environment.

An implication for AC/DC power supply design is that clearance distances between line and accessible parts have to be increased substantially. An AC/DC product with basic insulation designed for being used in an OVC II environment requires a 3.0mm minimum clearance for isolation barriers rated at 4kV, but for an OVC III environment, the impulse voltage rating increases to 6kV, requiring a 5.5mm minimum clearance (Tables F1 and F2 in the IEC 60664-1 standard). However, most AC/DC converters have reinforced isolation barriers. The standard requires that “the value corresponding to the next highest impulse voltage” be used. This means that a reinforced isolation converter needs clearances of 5.5mm/8.0mm for OVC II/ OVC III installations respectively.

IEC 60664-1 and IEC 61558-1 also specify dielectric strength test voltages at 50/60Hz that can be as high as the impulse test value. For example, IEC 61558-1 requires a dielectric test voltage of 4200Vrms = 5938Vpk for 300Vrms working voltage and OVC III/reinforced insulation, without specifying the altitude (Table 14 in the IEC 61558-1 standard). This is similar to the impulse test value from IEC 60664-1, which is 6kV at 2000m altitude. However, one test is for the dielectric strength for 60 seconds, while the other is a short transient impulse voltage.

The most appropriate safety standard that applies to a power converter depends on the actual application. The products for use in an OVC III environment are often best covered by the IEC 61558-1 standard about ‘Safety of transformers, reactors, power supply units and combinations thereof’. In this standard, Annex R references IEC 60664-1’s levels for the impulse test voltages. Fortunately, the safety clearance requirements in IEC 61558-1 are the same as in IEC 60664-1 Both the standards use the same altitude correction factors above 2000m.

The users may also choose to apply the IEC 62477-1 standard about ‘Safety requirements for power electronic converter systems and equipment’ for their products for OVC III areas. This standard also references the IEC 60664-1 impulse values, creepage/clearances, dielectric test voltages, and altitude correction factors.

The standard IEC 61010-1 about ‘Safety requirements for electrical equipment for measurement, control and laboratory use’ is the most appropriate for the test and measurement equipment used in OVC III areas. This standard specifies a clearance distance of 6mm for 300Vac reinforced isolation (Table K.3 in the IEC 61010-1 standard) compared to 8mm in the IEC 60664-1 standard. The altitude correction factors are the same. However, the other test requirements in the IEC standard 61010-1 are a little harsher. For example, the impulse voltage test in a 300Vrms OVC III environment for reinforced solid insulation is 6400V (Table K.6 in the IEC 61010-1 standard) unlike the IEC 60664-1 standard that specifies an impulse voltage test of 6000V.

Power supplies are available with OVC III ratings such as the RECOM board-mount RAC05-K/480 converters (Figure 3), which have an input voltage range of 85-528VAC, making them suitable for single-phase supplies and three-phase 400/480VAC line-to-line or line-to-neutral connections. This series that features 5W output power with 4kVac reinforced isolation is a class II power supply (noearth connection) and meets industrial safety and EMC requirements without any external components. The RAC05-K/480 series offers 5, 12, or 15V DC outputs and is ideal for equipment in a harsh industrial OVC III environment such as smart meters, renewable energy, or IoT applications. 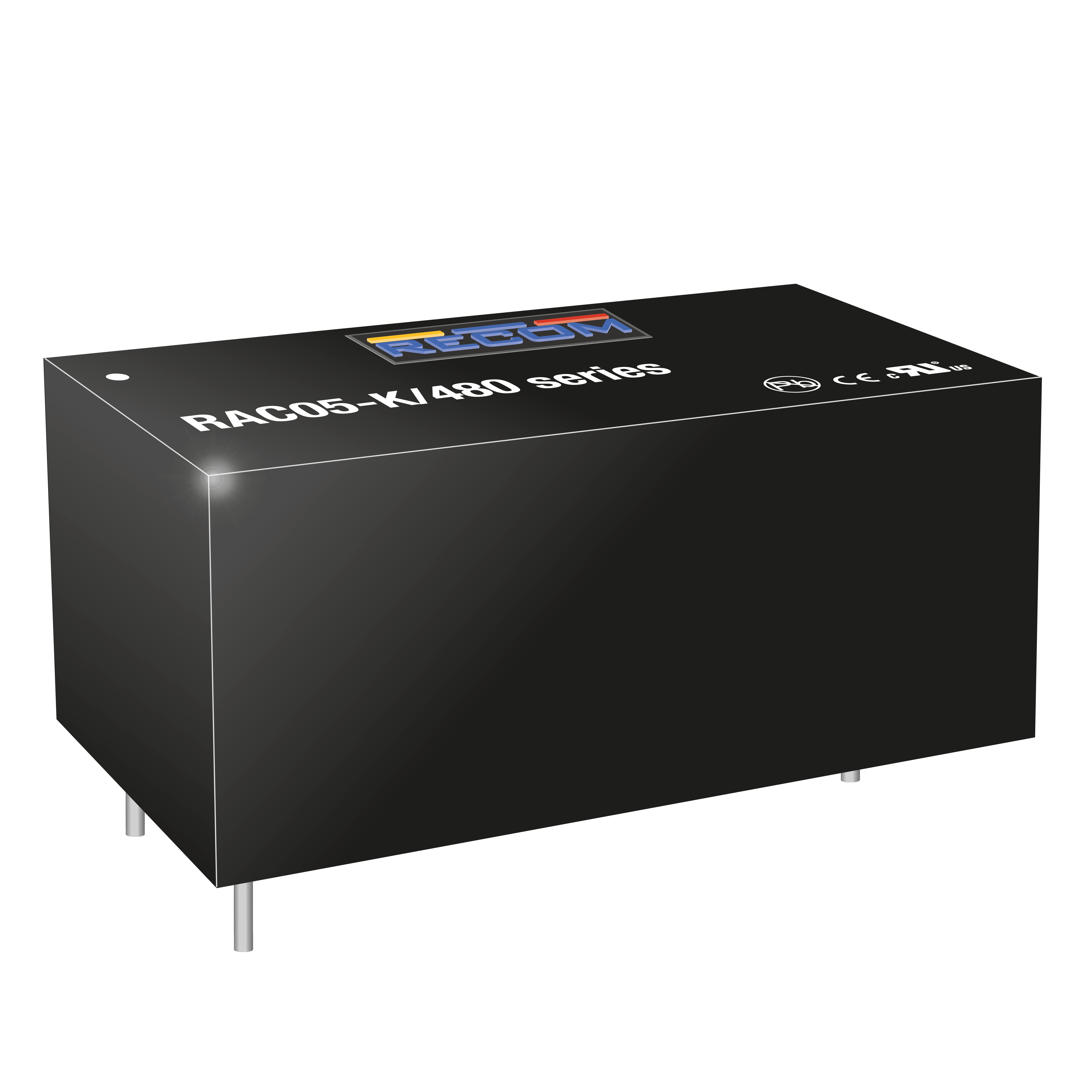 Figure 3. RECOM’s RAC05-K/480 AC/DC converter rated for use in an OVC III environment

Another possibility for OVC III applications is to use its parts with medical safety ratings. The power supplies that meet the requirements for 2 x Measures of Patient Protection (MoPP) in 240Vac systems will also meet the dielectric strength and creepage/clearance requirements of OVC III, namely, 4kVrms and 8mm respectively. However, medical-grade power supplies typically only meet the OVC II level requirement of fast transient immunity by complying with the IEC 61000-4-4 standard’s level 3, +/-2kV peak, even though they may withstand the 50/60Hz 4kVrms dielectric strength test. To increase the transient immunity to the OVC III level, however, requires an external surge suppressor, typically, a metal oxide varistor installed across the supply with a suitably rated upstream fuse or current limiting device to provide necessary protection should the circuit go short. Suitable AC/DC medical-rated power supplies in the RECOM range are in the RACM40-K, RACM60-K, RACM230-G, and RACM550-G series. These offer board-mount and chassis-mount options (Figure 4).

Figure 4. A selection of medically-certified AC/DC power supplies from RECOM

Medical-rated power supplies are required to incorporate double fusing on the AC power input when they could be used in ‘pluggable’ applications. Other standards for industrial, office, or home environments may specifically disallow this. So, while choosing a medical power supply for its compatibility with OVC III requirements but one that is also intended for being used in other applications such as industrial control, the neutral fuse may need to be replaced with a much higher value so the line fuse will always blow first. Medically-certified power supplies that are intended for permanent wiring-in may, anyway, have only a single live fusing.

Customized versions of these products intended for use in nonmedical applications in a fixed-installation OVC III environment are available on request.

It may have been difficult in the past to locate cost-effective AC/DC power supplies that are rated to installation in OVC III environments, but they are now increasingly available from manufacturers such as RECOM. A discussion with manufacturers’ technical support teams may also show that the products with medical certification may also meet the OVC III requirements with simple modifications as they already comply with the less stringent industrial-grade safety requirements.

Steve Roberts was born in England. He obtained a B.Sc. in Physics and Electronics at Brunel University, London before working at University College Hospital. He later moved to the Science Museum as Head of Interactives, where he completed his M.Sc. at University College, London. Eighteen years ago he made his own personal Brexit and moved to Austria, becoming Technical Director for the RECOM group in Gmunden. He is the author of the RECOM DC/DC & AC/ DC book of knowledge.