This article describes the operation and behavior of the three-level flying-capacitor booster.

High-efficiency solar inverters are getting more and more in demand in recent years. However, cost-efficient solutions are also desirable. To achieve this, not only the inverter but also the booster stage have to be low cost and high efficiency. Two- and three-level boosters are commonly used in solar inverters. The three-level solutions are able to decrease the voltage stress on the semiconductors and the output voltage ripple, and therefore the inductor size can be decreased. Due to three-level operation, the switched voltage level is half of the DC-link voltage. Thus, one can use semiconductors with lower blocking voltage, which are faster and cheaper. For three-level operation, an adequate DC-link capacitor (capacitive voltage divider) has to be utilized, which can then split the two-level DC voltage into three voltage levels. In this case, the PWM signal needs to be corrected to ensure the symmetry of the neutral point of the divider. Usually, two inductors are used in the input in three-level boosters.

In this topology, the additional voltage levels are synthesized by a capacitor, the so-called flying-capacitor. 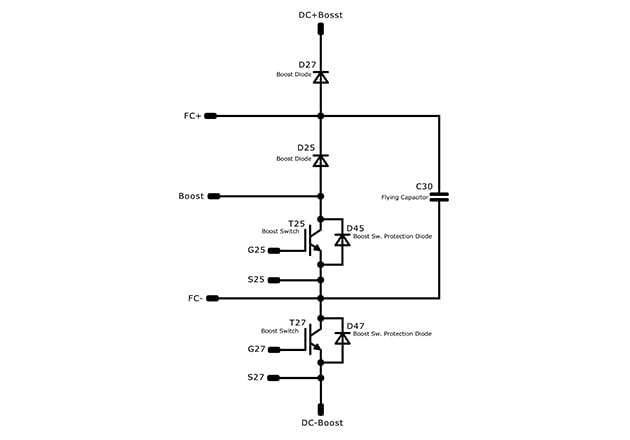 In the flying-capacitor booster due to the phase shift in the control of transistors, the input frequency is p times the switching frequency (p is the number of stages described later).

The Commutation Loops and Operation Modes of the Flying-Capacitor Booster 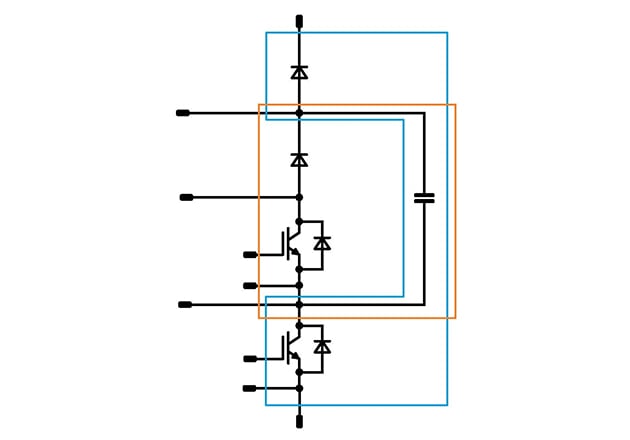 In general, the number of voltage levels are theoretically endless, but in practice three, four, and five levels are used. The additional levels in n level solution can be realized by adding extra outer commutation loops to the three-level converter. Every added booster’s commutation loop will be similar to the blue loop in Figure 2. The number of voltage levels can be calculated as the following:

where p is the number of the commutation loops (boosters). The voltage of the capacitor can be calculated:

where i is the number of the given commutation cells. The first loop refers always the most outer loop.

This article describes the operation and behavior of the three-level flying-capacitor booster. All other solutions can be realized based on this article. 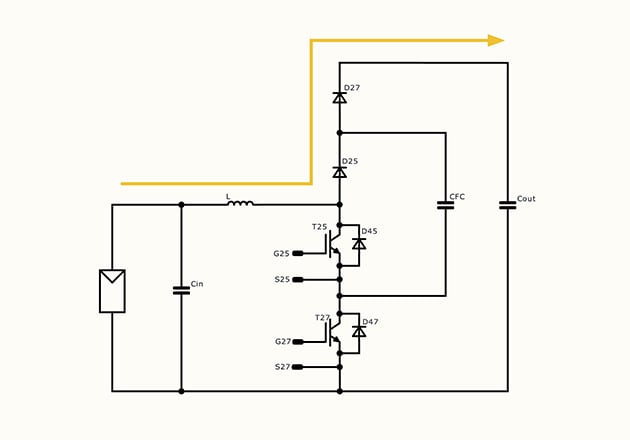 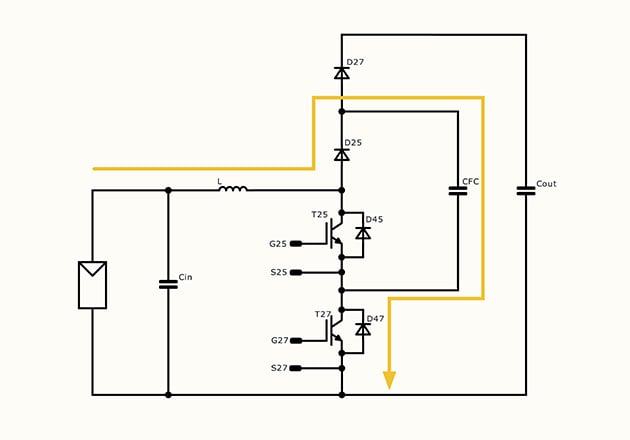 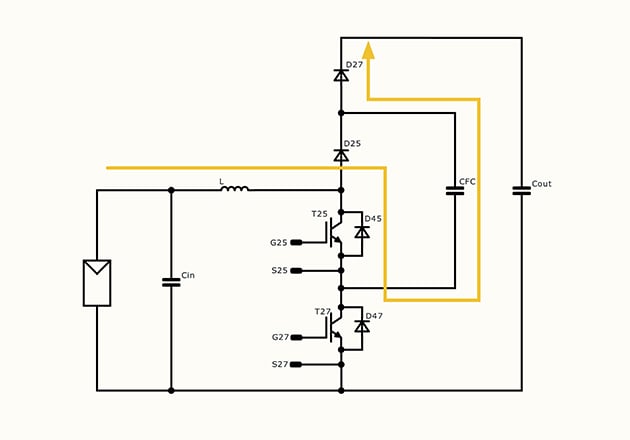 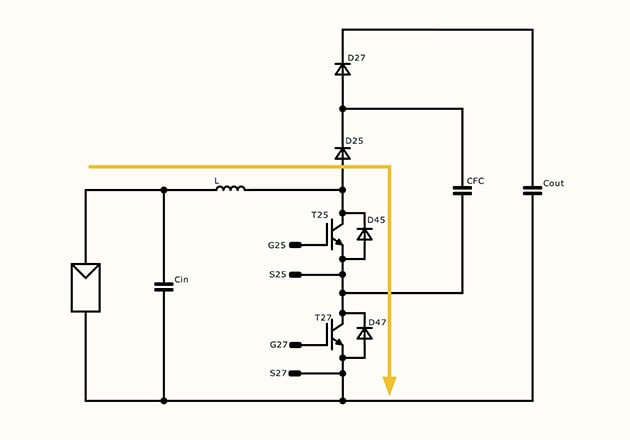 The transfer function (y) of the flying-capacitor booster is the following:

where is the duty cycle.

The most commonly used operation is, when is less than 0.5.

The Operation of the Flying-Capacitor Booster

In the flying-capacitor booster topology, the two transistors have to be controlled by 180° phase shifting (Figure 4). 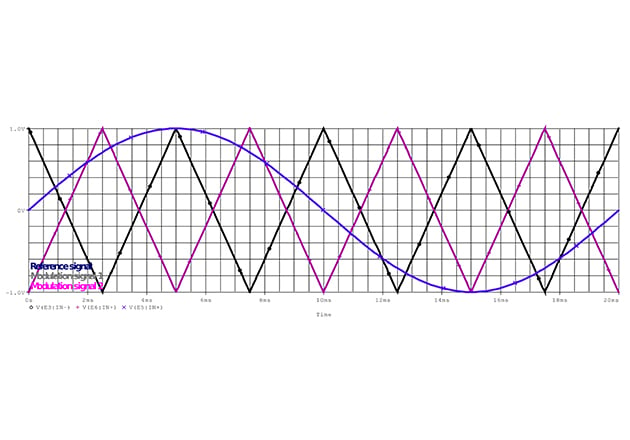 Figure 4: The reference and modulation signals for the PWM

This results in the case of D = 0.5, the operation modes will change between Mode 2 and Mode 3. The typical curves of the flying capacitor booster can be seen on Figure 5 in case of D = 0.2. 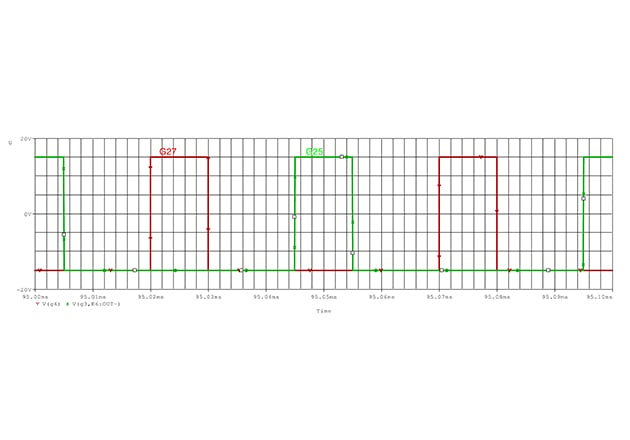 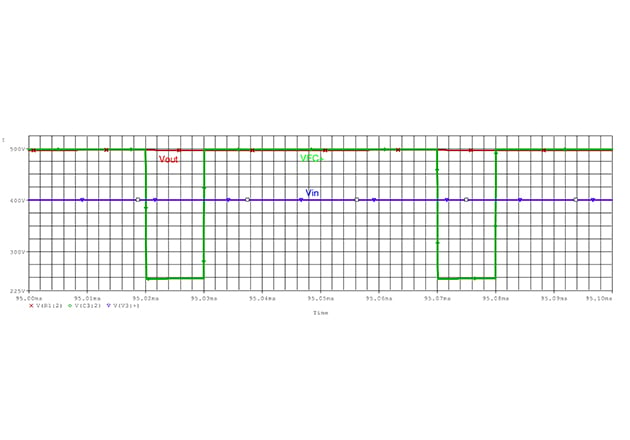 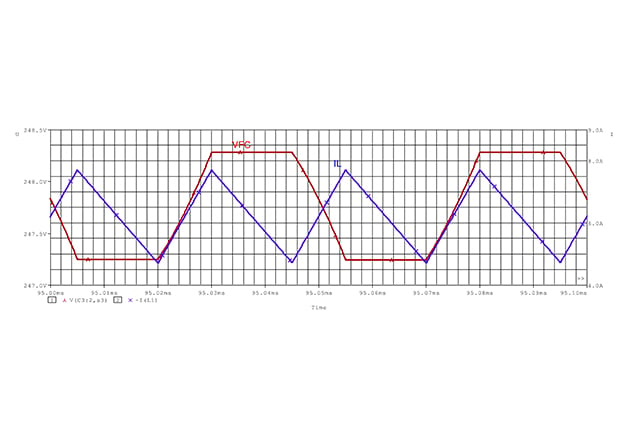 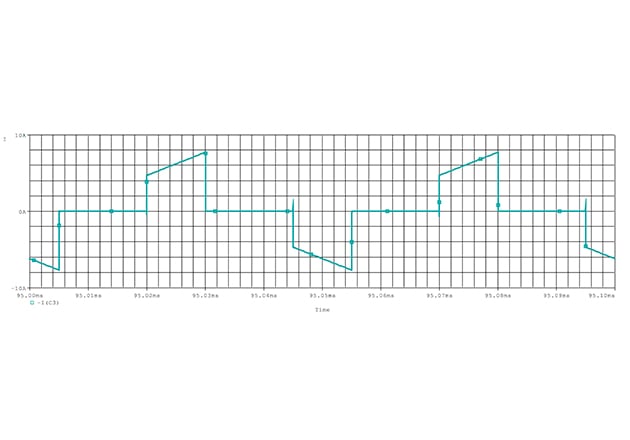 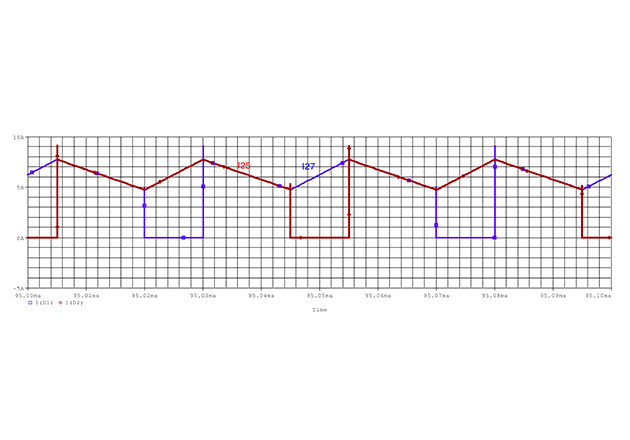 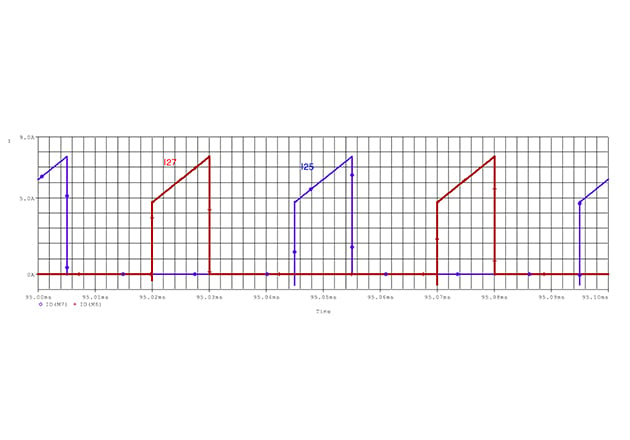 The Advantages of the Flying-Capacitor Booster

The flying-capacitor booster topology compared to the booster topology has the following advantages: • As the operation is three-leveled, the voltage stress on the semiconductor is decreased. This results in lower EMI, lower current, and voltage ripple.

The flying-capacitor booster topology compared to the symmetrical booster topology has the following advantages: • It has two-level input and output connection, while the third voltage level is synthesized by the flying-capacitor. This way the large three-level capacitors can be eliminated on the input and the output. • Only one input choke is needed.

In both cases, the input frequency is double of the switching frequency. This results in a lower input ripple current or the inductance can be decreased. Because of the double frequency, slower semiconductors can be used, which decreases the costs while the switching losses are also lower. This means for optimal behavior SiC MOSFETs are not needed, but Si IGBTs can be used.

For a more detailed comparison of the topologies and component selection, please see Vincotech’s benchmark “Boost your 1500 V string inverter”.

The flying-capacitor booster is a high-efficient, low cost solution for solar inverter applications. The main advantages are the frequency multiplication, the lower semiconductor voltage, the lower voltage and current ripple, the lower switching losses, and the low EMI emission, while the enormous DC-link capacitor can be also eliminated. As every other topology the flying-capacitor booster topology has some challenges also. Those will be addressed in another article.

Viktor Antoni holds a Master's Degree and a Bachelor's Degree in Power Electronics at Obuda University. He is specialized in electronics, semiconductors and product development. Currently, he works as a Development Engineer at Vincotech since July 2017.