Modular AC line filters are often seen in end-equipment, either chassis-mounted or integral to Heading 5 a connector, particularly in environments such as ITE, healthcare, and industrial electronics. The purpose of the filter is to attenuate emissions that originate from the equipment from a combination of power supplies, internal electronics, high-speed data lines, etc.

Internal power supplies normally meet statutory emissions standards on their own, typically EN 55011/EN 55032, so why is an additional filter necessary? Compliant components do not necessarily guarantee a compliant system. If there are multiple AC-DC converters, their emissions could add. Also, an AC-DC will have been tested under particular specified conditions of AC line impedance, loading, orientation and positioning of the part with respect to a ground plane, with set lengths and routing of cables and a passive load. Installed in equipment, the converter will not see these same conditions and emissions could be higher. Connections to the end-equipment power inlet could also pick up radiated emissions from other system components adding to conducted interference.

A typical solution is a modular filter fitted in, or close to the equipment power inlet connector. The selection of the filter from the many available is not trivial though for optimum performance and cost, so to help, let’s consider a typical filter arrangement and look at the function of each component. (Figure 1). 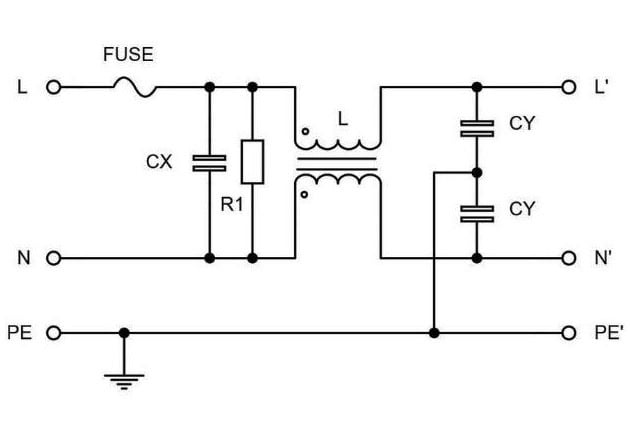 CX attenuates differential mode noise, that is, noise from line to neutral. It is an ‘X’ rated capacitor which can withstand specified AC line transients depending on the ‘over-voltage’ class of the environment. It is available as X1, X2, or X3 types with peak service voltage ratings of 4kV, 2.5kV and 1.2kV respectively, according to EN 60384-14. If the capacitor shorts due to stress, there is a risk of fire, so the component must be safety agency certified.

The capacitance value of CX can be high, limited only by practical considerations: it must discharge within a prescribed time when the AC line is disconnected, either by the downstream circuit or R1 to avoid a potentially dangerous voltage remaining on the connector pins. According to ITE and media safety standard EN 62368-1, the limit is less than 60V after two seconds if CX is greater than 300nF, with a higher voltage allowed for values less than 300nF or in environments only accessible to trained personnel.

In medical installations, the limit is 60V within one second according to EN 60601-1 but with no requirement if CX is less than 300nF.

R1 must be rated for the highest continuous line AC voltage and according to EN 62368-1, if fitted before a fuse it must also withstand transient voltages with no more than 10% resistance value deviation. For large values of CX, R1 must be relatively low resistance to achieve the discharge time specifications, with consequent significant continuous power dissipation. This can be problematic when trying to meet limits of no-load or standby losses defined by the US DoE and European ErP directive.

The two capacitors CY divert the current so it circulates locally rather than through the AC source. L1 can be a high value as the running current field cancels and prevents core saturation, but sometimes winding coupling is deliberately reduced to allow some leakage inductance, which helps with differential mode attenuation, perhaps reducing the value of CX.

The two capacitors CY also must be safety agency certified because if one fails short and the equipment ground is disconnected, the equipment enclosure can become live. Even without capacitor failure, if the ground connection is inadvertently disconnected, there can be sufficient ‘leakage current’ to the enclosure to give a shock, so the capacitance values are limited to give a maximum ‘touch’ and ‘en-closure’ leakage current according to the applicable standard. Limits could be milliamps in some industrial areas with hard-wired grounds, to less than 10μA in ‘cardiac floating’ medical environments. Capacitors are also specified according to the AC source class; Y1, Y2, Y3 and Y4, for peak test voltages of up to 8kV.

The fuse in Figure 1 is often included in panel-mounted modular filters such as the popular IEC320-C14 type (Figure 2). Some standards require that only the line connection is fused, others in medical and IT require that both line and neutral are fused. With single fusing, if the input is accidentally reversed, the fuse is then in neutral and is bypassed when neutral and ground are common, leaving protection reliant on upstream fuses or breakers which might be common to other equipment and consequently with a high current trip rating.

This current into the filtered equipment could represent a fire hazard. With line and neutral fused, a reversed supply is now covered. However, if the fuse in the neutral connection opens through a fault such as a line to neutral over-current, the equipment is apparently ‘dead’ but has live connections inside. To counter this, the neutral fuse value can be made one step higher than the line so that the line fuse would normally open first. Modular filter selectionVarious mechanical formats are available for modular filters; chassis-mount types, often with six-sided shielding with direct fixing to a grounded chassis, are very effective with short wiring to a fuse and inlet connector. IEC inlet connectors with a built-in filter are a popular choice with screw or snap-in mounting, with one or two fuses according to the application environment. C14 types are rated to 10A and C20 types available to 20A and higher. Versions of each type are available without ‘Y’ capacitors for medical applications with a maximum leakage current of typically 5μA. This reduces common mode noise attenuation which may need to be allowed for with cascaded filters, for example.

The load power sets the current rating of the filter allowing for the lowest input voltage and load power factor. For example, for a load of 300W with a power factor of 0.8 at a minimum of 90VAC, the current draw is 300/ (0.8 x 90VAC) = 4.16A suggesting a 5A rated filter.

Modular filters have published graphs of attenuation with frequency and a type can be initially chosen by measuring performance without the filter then subtracting this from the target to give desired filter attenuation. Performance data for filters is under particular test conditions, typically with 50-ohm source and load impedance, so attenuation in practice depends on the end circuit.

AC source impedance can be standardised using a Line Impedance Stabilisation Network (LISN) but the load could be very different to 50 ohms, varying with frequency and even showing negative incremental impedance. There is also the danger of resonances with other series filters causing unexpected results, even amplifying rather than attenuating EMI at particular frequencies.

As an experiment, the EMI performance of an AC-DC converter from XP Power, type PBR500PS12B, was plotted at 230VAC and 180-watt load with results shown in Figure 3. The converter showed compliance with EN55032 curve B emissions limits with a good margin, for quasi peak detection, as the standard requires. An extra filter was added, type XP Power FCSS06SFR, with the attenuation characteristics of Figure 4. The solid line is a common mode and dotted line differential mode attenuation. A plot of the combined effect on emissions is given in Figure 5, showing that up to about 1MHz, the overall attenuation in dB is the original plus filter value. Above a few MHz though, the attenuation is less than expected. This is due to the filter not ‘seeing’ 50 ohms termination at high frequencies, reducing its attenuation effect and confirming the necessity of practical measurements to confirm compliance with emission limits. The type and performance of modular EMI filters is a complex choice and vital to get right to avoid the costs of potential redesign at EMC testing, when product release should be close. Over-kill with a large filter is costly and can even be counterproductive with unexpected results. Manufacturer XP Power is here to help, with a wide range of filters to complement their AC-DC converter products, with a choice of current ratings and attenuation characteristics in IEC and chassis mount formats. Versions are available for all applications including low-leakage types for medical with yet more planned for high current and three phase applications. Multi-stage filters are also available for increased attenuation as well as custom ver-sions as required.

XP Power offers comprehensive application support for their products and can assist in pre-compliance test-ing of customer products with free use of in-house EMC test facilities in company locations worldwide.

Gary Bocock started as a UK managing director at XP Power, then later he become the technical director of XP Power.