Lifetime Analysis of PrimePACK™ Modules with IGBT5 and .XT

Lifetime Analysis of PrimePACK™ Modules with IGBT5 and .XT

One of the major criterions for the reliability of power modules is the capability to withstand cyclic active thermal loads. The improvement of the die attach technology as well as the top-side interconnect and the substrate-to-baseplate solder will lead to a better thermal cycling capability and along with that, the new .XT joining technology will significantly increase the lifetime of the module.

To predict the lifetime of a power module based on a defined mission profile, lifetime models were developed for the standard packaging technologies. These models take the relative temperature swing ∆T, the mean Tvjm, and maximum junction temperatures Tvjmax as well as the duration of thermal stress (ton) [1, 2] into account.

The novel joining technology .XT for PrimePACK™ power modules has been introduced to meet the future requirements of higher reliability and temperature stability. Using copper wire bonds for the top-side interconnect and silver sintered die attach layers led to a significant increase of lifetime. With the introduction of these new interconnect methods it was possible to increase the lifetime and temperature stability of power modules [3-5].

In general, thermally induced mechanical stresses in a chip-to-substrate or a wire bond interconnect are caused by a coefficient of thermal expansion (CTE) mismatch between the joint partners or by an inhomogeneous spatial temperature distribution during thermal cycling. Thus the degradation and failure of the interconnects are defined by the properties of the interconnect materials themselves.

The ability of a material or interconnection to withstand a given thermally induced stress is determined by several key properties. In general, a low plastic deformation during temperature cycling results in lower mechanical damage. This indicates a higher reliability of materials with increased mechanical strength. In addition, high values for parameters such as total elongation at breakpoint to an increased robustness against the plastic deformation.

The majority of existing modules is characterized by standard joining technologies such as aluminum wire bonding and soft soldering. They suffer from low inherent mechanical strength and low melting temperatures resulting in a limited reliability at operation temperatures excceding150°C. 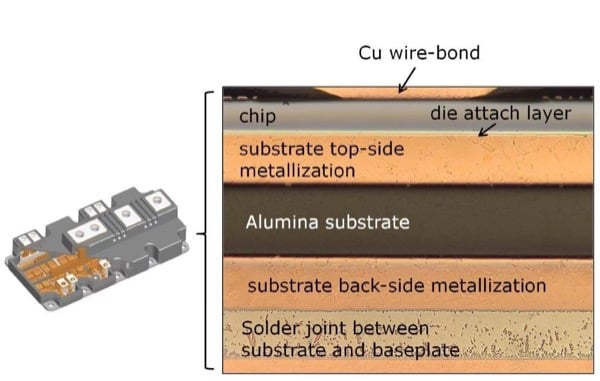 One method to increase the reliability of the top-side interconnects is to replace aluminum by copper wire-bond material. Because of its much higher yield and tensile strength combined with a lower CTE, the amount of plastic deformation for a given temperature cycle is significantly reduced compared to aluminum.

Equally important for the module´s lifetime are novel die-attach technologies such as sintering using silver particles. Improved mechanical properties, with respect to soft solders, are also obtained for sintered Ag die attach layers. This is predominantly a result of the high melting point and the higher mechanical strength of the material.

To enhance the power terminals´ connections as well, ultrasonic welding (US) is implemented. The joint between DCB and BP is upgraded utilizing an advanced solder technology. However, compared to the other interconnect materials, a higher plastic deformation during temperature cycling and creeping fatigue cannot be excluded for the substrate-to-baseplate solder.

The failure mechanisms in power modules employing improved wire-bond technologies, sintering as die attach and the improved solder between substrate and baseplate were investigated in detail [4], they are displayed in figure 2. The degradation of the substrate-to-baseplate solder has been identified as the most prominent failure mode which is effecting lifetime.

Current lifetime models for power modules employing standard technologies underline the impact of the temperature difference ΔT, the mean or maximum junction temperatures Tvjm, Tvjmax and the duration of the load current ton during one cycle on the estimated lifetime of a power module [1, 2]. Even though these models are empirical, ΔT, Tjm and ton can be related to driving forces of degradation. The first lifetime model [1] presented was later extended by adding terms that describe the impact of ton, the current per bond-foot, the voltage class U, with respect to chip thickness, and the bond-wire diameter D [2].

For the development of a first lifetime model focusing on the new die attach technologies, the power cycling results presented [4] were revised. Most importantly, failure data from samples with different die attach technologies were grouped together. This is a valid approach since the failure is always related to the substrate-to-baseplate solder [5].

Figure 3 presents the excellent power cycling results of PrimePACK modules employing .XT with regard to Tvjmax and ton. For comparison, the results of standard technology are added to the graph. 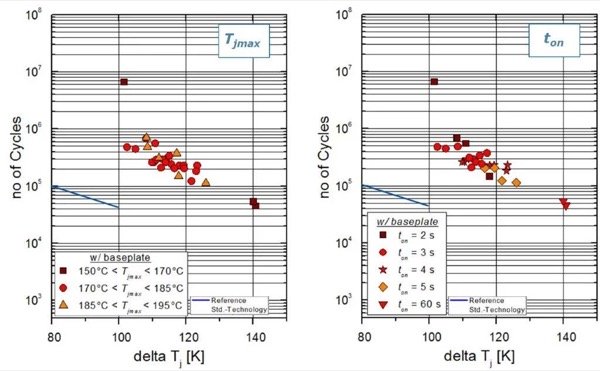 Figure 3: Power cycling results of PrimePACK™ samples employing .XT sorted by a) Tjmax and b) ton.

The examination of the copper wire bond connection out of this PC test does not reveal degradation. Thereby it can be concluded that bond failure will not be an issue for the new joint technology .XT.

The degradation pattern in the baseplate solder can be analyzed by means of scanning acoustic microscopy (SAM). Figure 4 depicts the results and underlines the impact of ton. For ton=2 s, the degradation of the solder starts directly below the chip (Figure 4 a). Increasing ton from 2 to 5 s leads to a higher ΔT at the edges of the substrate-to-baseplate solder joint which in turn manifests itself in additional shear forces and a more dominant degradation at the edges compared to the beginning of the test (Figure 4 b). It has to be underlined, that the sample from Figure 4a afterwards reached more than 6∙106 cycles. 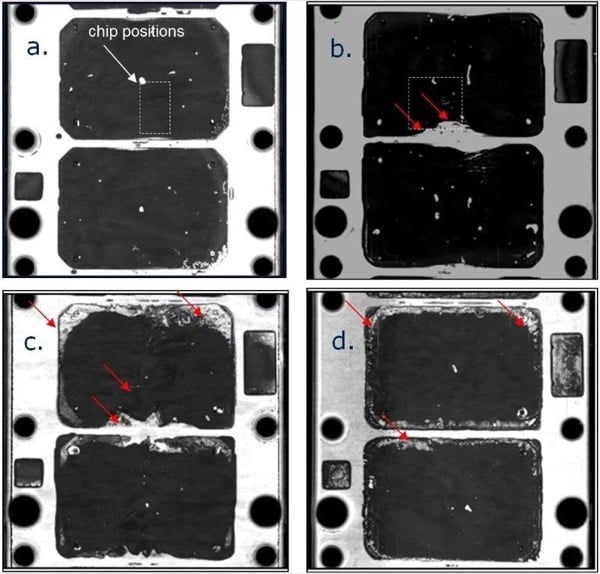 Figure 4: SAM pictures of the baseplate to DCB solder interconnect after power cycling.

When ton is increased even further to 60 s, this effect becomes even more apparent as degradation is strongly accelerated at the edges of the baseplate-solder (Figure 4c). For this load, the degradation pattern bears a strong resemblance to that obtained after passive thermal cycling. With the findings from [6] it can be expected that a further increase of ton would lead to a complete shift of the critical degradation from below the chip to the edges of the DCB.

On the other hand, a further reduction of ton is expected to result in significantly higher lifetime – independent from ΔT – as the stress in the substrate-to-baseplate solder is reduced significantly.

In contrast to standard joining technology, the wire-bond related failure loses importance as bond failure can be excluded with .XT. By increasing ton, the degradation of the baseplate solders joint shifts from below the chips toward the substrate´s edges and becomes the most prominent EOL mechanism. The .XT lifetime is still dependent on Tvjmax and ton but is shifted to much higher numbers of cycling.

Based on this and in comparison to EOL mechanism of standard joining technologies, aluminum wire-bond and soft-soldering die attach, the .XT joining technology provides a major advantage with respect to lifetime. The described results of the lifetime research will be implemented in new lifetime models of the innovative .XT interconnect technologies.