Various frequency converters for pumps and compressors are used in the petrochemical industry for extracting and producing oil and gas, which leads to a large load of the grid with harmonics. This problem can be solved with EPCOS PQSine®.

OMV Petrom is the largest energy company in Romania and South Eastern Europe. The company is active along the entire energy value chain: from exploration and production of oil and gas, to refining and fuels distribution, and further on to power generation and marketing of gas and power. In Romania, the company currently operates around 200 onshore and offshore oil and gas fields, including some fields with a very long history, as well as recently discovered deposits. Projects that improve energy efficiency are of particular importance for OMV Petrom. In this context, regular modernization and retrofit activities of existing installations are carried out.

One of the recent retrofit programs took place in one of OMV Petrom’s production sector in Asset Moldova. The main objective of this project was the modernization of electrical panels to increase productivity and improve energy efficiency. To meet this target, the electrical equipment for the oil extraction wells and the actuators had been updated to state-of-the-art variable-speed drive technology.

At the end of the retrofit program all the approximately 500 pumps at this site were equipped with frequency converters. While this helped to bring production to the next level and significantly improve energy efficiency, at the same time also a new problem was introduced with this technology: One side effect of the extensive installation of frequency converters is a remarkable increase in harmonic distortion. Harmonics are caused by the non-linear characteristics of power electronic devices, such as frequency converters which draw a non-sinusoidal current from the grid. This leads to higher-frequency portions that are superimposed to the fundamental sine wave (Figure 1).

Figure1. Non-linear loads such as frequency converters cause harmonic distortion on the grid. Image used courtesy of Bodo's Power Systems.

Due to the grid topology in this site, the distortion was not only limited to the low voltage (LV) network but migrated also to medium voltage (MV) level. Measurements revealed that the THD-I (Total Harmonic Distortion) in the MV grid exceeded 30% at times.

High THD levels have a negative impact on power quality (PQ) and can lead to various problems. At the site of OMV Petrom, the high distortion level was the root cause for several issues that also affected productivity:

Due to these severe PQ issues, OMV Petrom decided to identify a possible solution and to implement it. This decision was driven by OMV Petrom in order to increase the reliability and efficiency of its production and by utility regulations.

OMV Petrom agreed with Servelect – a consulting and engineering company in the field of energy efficiency – on a comprehensive power quality measurement scheme. In this programme, the power quality of all transformer stations (about 50) in the "Independence" Production Sector was recorded under different operating conditions. The recorded data was subsequently analyzed by Servelect and TDK experts. The summarized results of the analyses were finally presented in an energy audit report.

After a thorough discussion of the report and identifying the main power quality problems, the necessary steps were taken to obtain all required permits from the authorities to start the implementation of the project.

The technical solution designed by Servelect and approved by the regional distribution system operator (DSO) is based on harmonic mitigation through active harmonic filters (AHF). An AHF is a power conditioning device that continuously measures the harmonics and dynamically injects a compensation current that cancels the harmonics. For this project Servelect used standard AHF units from TDK Electronic’s PQSine® series and designed a customized turnkey solution. Figure 2 illustrates how PQSine® works.

Based on measurements and comprehensive simulations, Servelect identified the optimal locations for installing the filter units. As selection criteria, the harmonic distortion level, as well as the installed load, were considered. Amongst the 50 transformer stations the ideal locations for the AHF installations were selected with the target to bring down the THD level in the MV grid.

One particular challenge of this project were the environmental conditions in the area. Usually AHF are installed indoors in an industrial environment. In an oil production site that is situated in a remote location the conditions are obviously much more tougher. The AHF cabinets had to be installed outdoor close to the oil pumps. For this purpose, a special enclosure had to be designed to protect the units from external influences such as rain, snow and dust. The climatic conditions with temperatures in the winter below 0°C and warm summers also required installing a heat exchanger for temperature control (Figure 3). 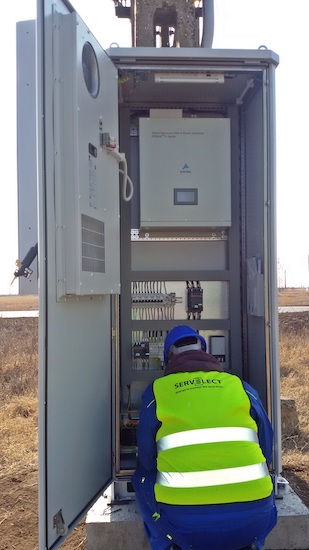 In order to minimize the impact on the running production all involved partners had to agree on a tight timeline for the commissioning. The main task of the commission team was the electrical connection of the AHF cabinets and the verification of the main control parameters in the HMI using the HMI (Human-Machine Interface) integrated into PQSine® (Figure 4). 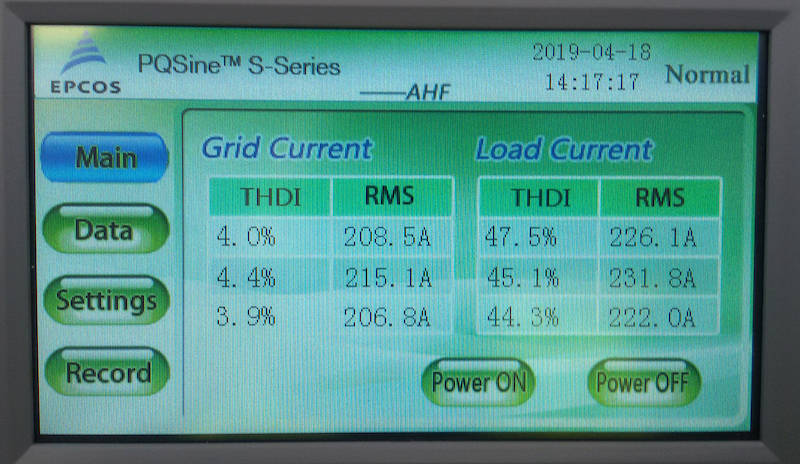 Figure 4. With the HMI integrated into PQSine®, control parameters can be set and data retrieved. What is clearly visible: Thanks to PQSine®, the THD-I value on the single phases could be reduced to values of just 3.9% to 4.4%. Image used courtesy of Bodo's Power Systems.

For the system setup, the CT parameters had to be entered and the operating mode selected. A significant benefit of PQSine® systems: Apart from harmonic compensation, the AHF can also be used for power factor correction and load balancing.

In the first instance, the performance of the PQSine® units was already checked during commissioning. The integrated power quality monitor of the AHF shows various parameters that allow the operator to check the system performance. In the LV grid where the AHF units were installed, the THD-I values could be reduced from values as high as 50% to values in the range of 4-10%. This significant power quality improvement in the LV grid also helped to subsequently reduce the harmonic distortion in the MV and maintain the specified limits. Moreover, the negative effects that go along with poor power quality could be diminished to a large extent or eliminated completely.

The use of active harmonic filters is not only limited to this particular application but can be applied for any installation with voltage quality issues caused by high harmonic loads. Typical applications include industrial production processes, the oil and gas industry, data centers, office buildings, shopping centers, water treatment plants and the field of renewable energies.