How Intelligent Power Modules (IPM) Can Contribute to Energy Savings

How Intelligent Power Modules (IPM) Can Contribute to Energy Savings

IPMs have been enlarging their presence on many applications and systems because of their high level of integration (Power Stage, Drivers, Protections and, in some cases) that makes easier and faster the designers‘ development phase, permits to reduce overall dimensions and get more reliable final products

Fuji Electric has developed and is now starting to introduce the 7th Generation IGBT-IPM – as heritage of previous technologies – a family of devices that will permit to reduce losses, improve the performances and save the space of mounting. These IPMs, by embedding the latest 7th Gen – X series chips (able to operate up to 175°C) and a new dedicated control IC, enables the system to operate at 150°C continuously, achieving loss reduction of about 10% and an output current increase of about 31%.

Since the releasing of the first IGBT module in 1988, Fuji Electric has been developing and using several technology innovations to achieve loss reduction, size shrinking, higher power density and improved reliability to satisfy the unceasing demanding request of the market. This permitted the designers to implement smart technical solutions and get high performances on their systems whatever consumer, industrial and automotive they were. IPMs followed this approach issuing a higher level of integration by embedding a driver (control circuit and protections) dedicated to the IGBTs chips used into the module. Within the new 7th Gen IPMs, the first thing that comes up to a first glance is the various lineup of package.

Each manufacturer has followed his own way of adapting the design to its best package solution:

Fuji Electric decided to have package compatibility with its previous 6th Gen V-series IPMs to permit existing users to get some performance improvements on those systems already in production. As well, taking advantage from the new 7th Gen dice/chip size and technology, 3 new packages like the P638, P639 and P644 having smaller layout but same current capability and thermal performances of bigger packages are introduced. Depending on package, the 7th Gen X-series IPM is providing full inverter (6 in 1) configuration as well as inverter plus brake (7 in 1) topology for both 650V and 1200V technologies.

Everytime a new component is designed and produced, we consider all the materials used to get the performance at their top maintaining a high level of reliability. Therefore, some technical improvements have been introduced to achieve such targets by focusing on chips/ dice, package materials, driving circuit and improved functionalities.

The 7th Gen IPM is using the latest Fuji Electric chip technology that brought some improvements which can be summarized as:

These dices/chip technology are integrating 2 sensors:

These functions are used by the internal protection circuit to warning and alarm/shut down the power section in case of issues before they can lead to the module disruption.

In order to get the best performance possible (loss, thermal, switching response, EMI/EMC, etc.) a dedicated new driver circuit has been designed and embedded into the 7th Gen IPM. The 7th Gen IPM comes with a dedicated turn-on drive-current function that maintains the same high performance over the high temperature operating range. At high temperatures, this function increases the current driving of the IGBT and reduces the turn-on loss; as well, the IGBT temperature is detected on chip to enable the changing of drive-current at optimum timings. The improved switching performances and the reduced turn-on loss set up by the drive-current function used in the 7th Gen IPMs is shown in the figure below: 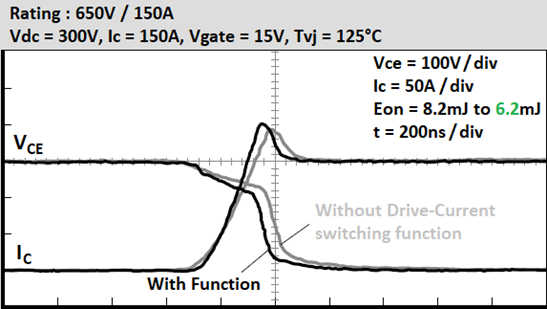 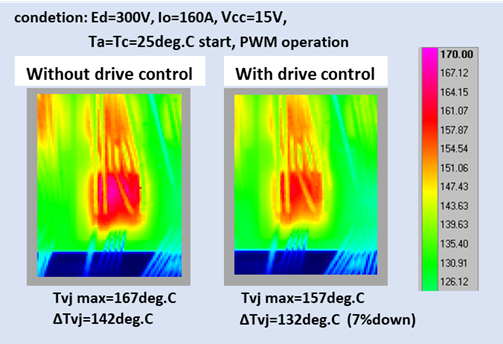 This new function reduced the turn-on loss of about 24% compared to the without the drive-current control. The drive-current function has also optimized the switching characteristics to get much lower impact on the emission noise. In addition, the operating behavior of this new circuitry in conjunction improved the thermal response too. It has been measured a reduction of about 7% despite the miniaturization of the chips and the reduced dimensions of some packages as well as the increased power density, as shown in the figure below:

The reduced on-voltage achieved by increasing channel density enhances current flow and, by consequence, reduces short-circuit withstand capability. So, the 7th Gen IPM is made faster the operation of the short-circuit protection and improved the protection circuit too. 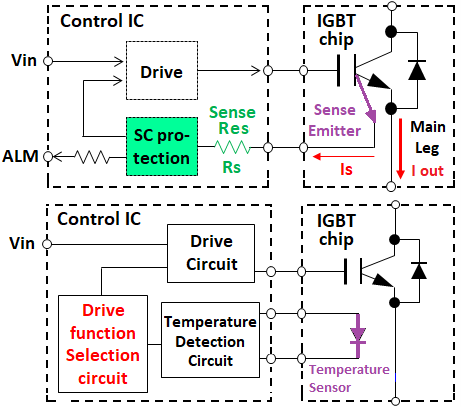 The 7th Gen IPMs are using chips having current and thermal sensors integrated on it to provide fast reaction time and 3 kinds of protection circuits:

Warning and alarm signals are brought out on 2 output terminals where the alarm output permits to discriminate the fault occurred by means of 3 different length pulses over just one wire to properly manage the event and build up a maintenance log report. The warning signal is not influencing the operation of the IPM, besides the alarm signal stops the input signals – coming from the microcontroller – and shut-down the power section to preserve the module integrity from destruction. Therefore, when the additional temperature-warning signal is set to the output, the IPM continues to operate as per the PWM signals sent by the microcontroller.

In particular, if equipment has a cooling failure (such as fin clogging, fan failure, compound depletion, etc.), a temperature warning signal will be sent to the microcontroller when the IGBT chip reach a certain temperature threshold. The microcontroller having received the warning can decide to modify the PWM control to reduce the load current or stop it depending on system requirements.

By consequence, the designer can apply a smart way to follow the temperature variations and wisely manage the warning / alarm signals: 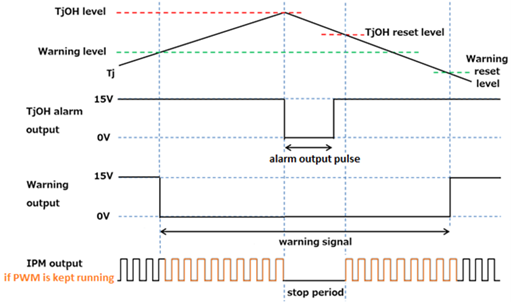 Another improvement has been added in the “7 in 1“ configuration where the 7th Gen IPMs are including an independent brake circuit that is not affected by the protection circuits during the issuing of alarms; this allows, in motor control application, to operate in regenerative mode. In conventional IPMs, when after a failure detection an alarm of lower arm is set, the protection circuit deactivates the whole lower arm to stop all the operations.

Therefore, the brake IGBT will also be deactivated and the brake circuit would not be able to regenerate the energy created by the rotating motor so that the DC link voltage will tend to increase. The new 7th Gen IPM function will prevent overvoltage breakdown issues unless an abnormality occurs in the brake circuit. All the 7th Gen IPM improvements shown above are thus ensuring a high level of overall reliability.

The past decade has been characterized by an increase of expectation to contribute to power save and conservation by means of an efficient use of energy in order to mitigate the global warning and help to achieve a responsible and sustainable growth. Having in mind such a request and purpose, Fuji Electric developed and offers the 7th Gen / X series Intelligent Power Modules, a family of “easy to use” devices that facilitate the aim of developing higher efficiency, more reliable, compact circuits and cost saving solutions for industrial application like motor control, air conditioning, elevators, pumps, compressors, fans, etc. These versatile components - “an almost Plug and Play solution“ - can help designers and systems manufacturers to shorten the development time, improving the overall requirements and performance expectations and be quickly ready to sell their systems satisfying the Time to Market challenging requests. All the above makes the Fuji Electric 7th Gen X Series IPM a very attractive device for many applications.