This article highlights the impact of a super junction MOSFET gate-source threshold voltage (VGSth) in soft switching applications, using a half-bridge LLC as a test vehicle.

In this article, was investigated the impact of a super junction MOSFET gate-source threshold voltage (VGSth) in soft switching applications, using a half-bridge LLC as a test vehicle. A higher VGS(th) impacts many aspects and introduces certain benefits and disadvantages as well.

Our first analysis concerns higher VGSth values during the turn-OFF of an SJ MOSFET. As shown in Figure 1, the threshold voltage defines toff, and the drain current must fall to zero when VGS reaches the threshold, so a higher VGSth reduces the toff, which equates to lower switching losses. We performed a simulation in SIMetrix that reproduces a double pulse test to verify this behavior. The same spice model was used and only the VGSth parameter was changed. Table 1 shows the results.

The model we used corresponds with the same MDmesh™ technology from STMicroelectronics, with the only differences being the gate to source voltage thresholds. The simulation confirms an improvement in switching performance for the higher 4V threshold with respect to a 3V threshold. Figure 1: VGSth role during turn OFF

Clearly, VGSth impacts the turn-OFF mechanism in hard switching applications in a similar way to soft switching, but the presence of turn-ON losses implies a tradeoff between Eon, Eoff, and VGSth.

To confirm the simulation results, the same MDmesh™ technology was evaluated in a Half bridge LLC (HBLLC) resonant converter using identical DUTs except for different gate threshold levels (VGSth = 3V / VGSth = 4V). Table 2 shows the measured VGSth values. The HBLLC used is the EVALJIG_HBLLC_v4.1 an open loop converter, rated at 600W. The Eoff is taken at 10%, 25%, 50%, 75% and 100% of the Pout (see Table 3), in order to evaluate the differences in terms of switching energy, and how this lower turn-off energy is reflected in terms of higher power efficiency. Table 2: Measured VGSth value for the four devices under test

Figure 3 and Figure 4 show the waveforms taken with an oscilloscope at 10% of the maximum load. The measurement setup used is the following:

Starting from the values in Table 3, it is possible to calculate the power associated with the Eoff delta for a known switching frequency using the well-known formula shown in Equation 1. It is clear that a higher gate threshold leads to higher efficiency, especially at light loads. ΔT represents the difference in temperature for each device with the lower threshold; Equation 2 shows the relationship between power and temperature, where Rthj-amb for a TO-220 package is 62.5 °C/W. It is important to highlight that the MOSFETs used in this test are measured without a heatsink.

Advantages and Disadvantages of a Higher VGSth

The threshold voltage sets the condition when the current starts to flow in the MOSFET; if there are disturbances in the converter or if the ground plane is weak, some current can flow on the gate resistance (through the parasitic gate to drain capacitance CGD) and may create a voltage between gate and source terminals that could turn on the MOSFET and thus compromise the reliable operation of the entire system. Higher thresholds give higher immunity because of the voltage required across Gate and Source (i.e., the product of RGon and noise current) to turn ON the MOSFET higher. 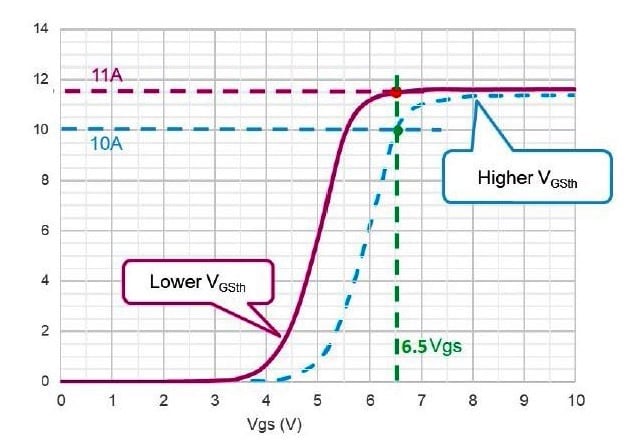 The higher threshold also mitigates the gate oscillation that occurs during turn-ONand turn-OFF, which can improve the reliability of the device due to lower gate oxide stress.

A major drawback is an impact on the gate driver. In some lighting applications or chargers, the driving voltage is less than 10V; around 6 to 8 V. Figure 5, which shows the transfer characteristics of two devices with respective VGSth = 3V and 4V values, demonstrates that a higher threshold limits the current capability when the driver is unable to operate with 10V.

Considering all the advantages and disadvantages of higher VGSth in resonant applications, it seems that this approach is the right option as it improves electrical and thermal performance, especially at light loads, and increases noise immunity as well as mitigating gate oscillation.

Alfio Scuto went to the University of Catania and works as a senior high power RF application engineer at STMicroelectronics.

Simone Buonomo studied at the University of Catania and works as a market and application development manager at STMicroelectronics.