High-performance IGBT modules switch currents in the kA range, whereby unwanted and in some cases harmful voltage overshoots can occur due to DC link leakage inductances.

With its latest development, the SkiiP®4 IGBT module manufacturer Semikron has optimized both design and performance. The new model has a DBC concept (Direct Bond Copper) with no base plate and on a newly developed high performance -cooler. As a result, the power module SKiiP2414GB17E4-4DUHP, which in this example is made up of four half, can now switch up to 25% higher currents of significantly more than 2400 A at a voltage of up to 1700 V at the IGBT.

Most conventional DC link designs quickly reach their limits with these high currents due to their leakage inductances. One feature of the SkiiP®4 module is the integrated intelligent adaptation of the power-off speed at very high DC link voltages, which protects the semiconductors against excessive transient overvoltage at the moment of turn-off. However, this protection function can generate additional losses and during continual operation is actually an indication of excessive DC link inductance. Therefore, it to reduce the DC link inductance to decrease the voltage stress when turn off the IGBT and simultaneously reduce the IGBT’s turn-off losses.

TDK has developed the B256* series of particularly low-inductance EPCOS DC link capacitors especially for new generations of IGBT modules. Table 1 and Figure 1 provide an overview of these models. 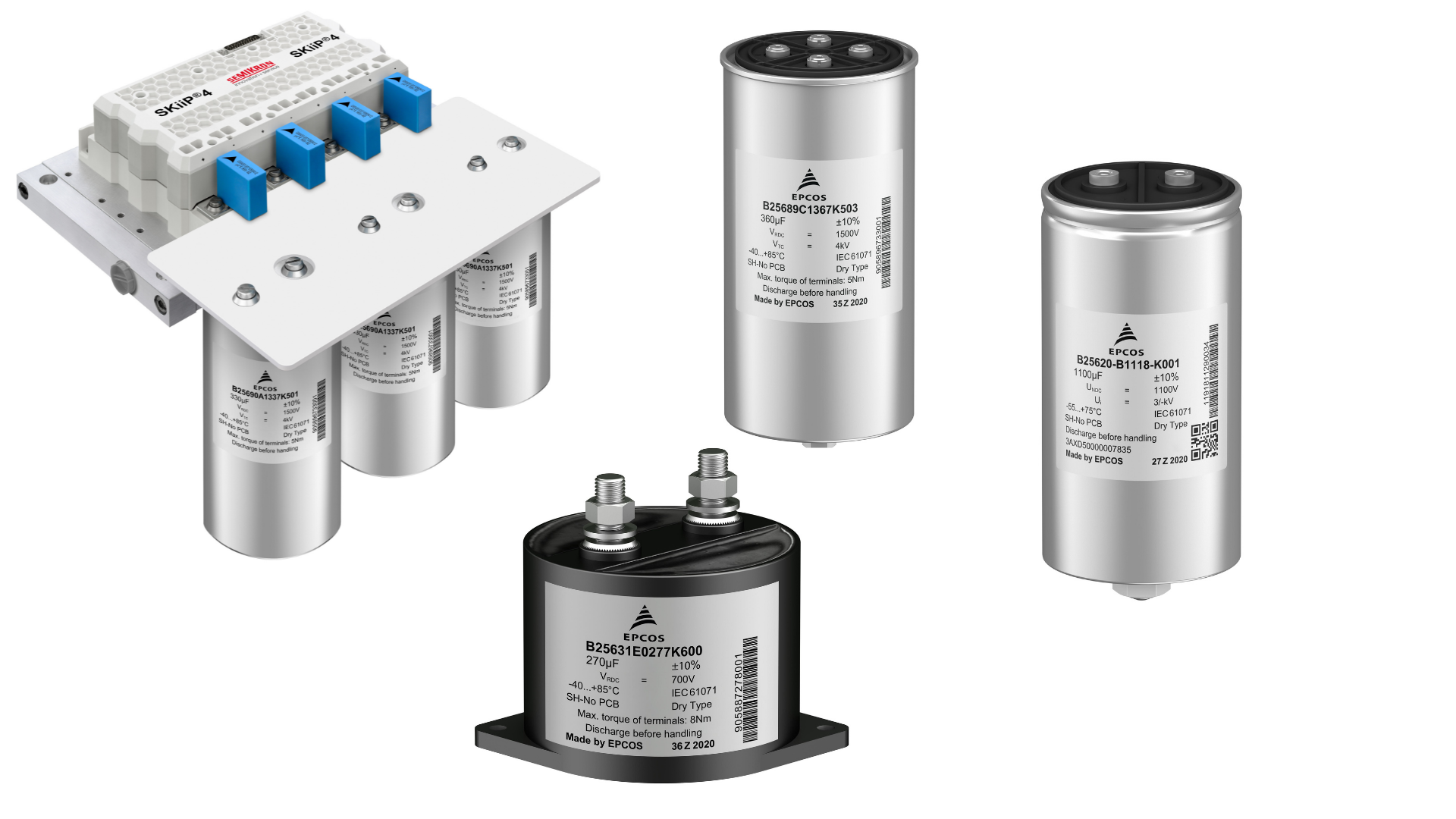 These DC-Link capacitors provides a outstanding performance with particularly low losses due to their very low ESL(self inductance) and ESR (serial resistance). DC link capacitors are connected to the SkiiP®4 modules either individually or as a capacitor bank. They are usually positioned directly next to the power modules in order to allow low inductances thanks to short lead lengths. However, in many cases this type of installation is not possible due to the existing construction space.

TDK is now launching its EPCOS special-snubber capacitors with mechanical and electrical parameters that are tailored to all SkiiP®4 modules to achieve a low-inductance design without any extreme voltage overshoots. One particular feature is the height offset of the connection lugs, which has been precisely adapted to the corresponding geometry of the SkiiP®4 modules (Figure 2).

An additional benefit of the new development of the special snubber capacitors lies in the fact that it allowed for the optimization of their special inner structure as well. The maximum inductance values are therefore extremely low at less than 6 nH. There are currently two capacity values that have proved optimal for the SkiiP®4 modules: 330 nF and 470 nF with a rated voltage of 1600 V. These two specialcapacitors complete the EPCOS B32656S/58S series with the circuit diagram T12 for which TDK has a range of film capacitors. This makes it possible to use these capacitors in connection with other busbar configurations. The capacitors are easy to install and use in combination with the SkiiP®4 module. This constitutes an optimized and cost-reducing solution compared to more complex DC link designs. 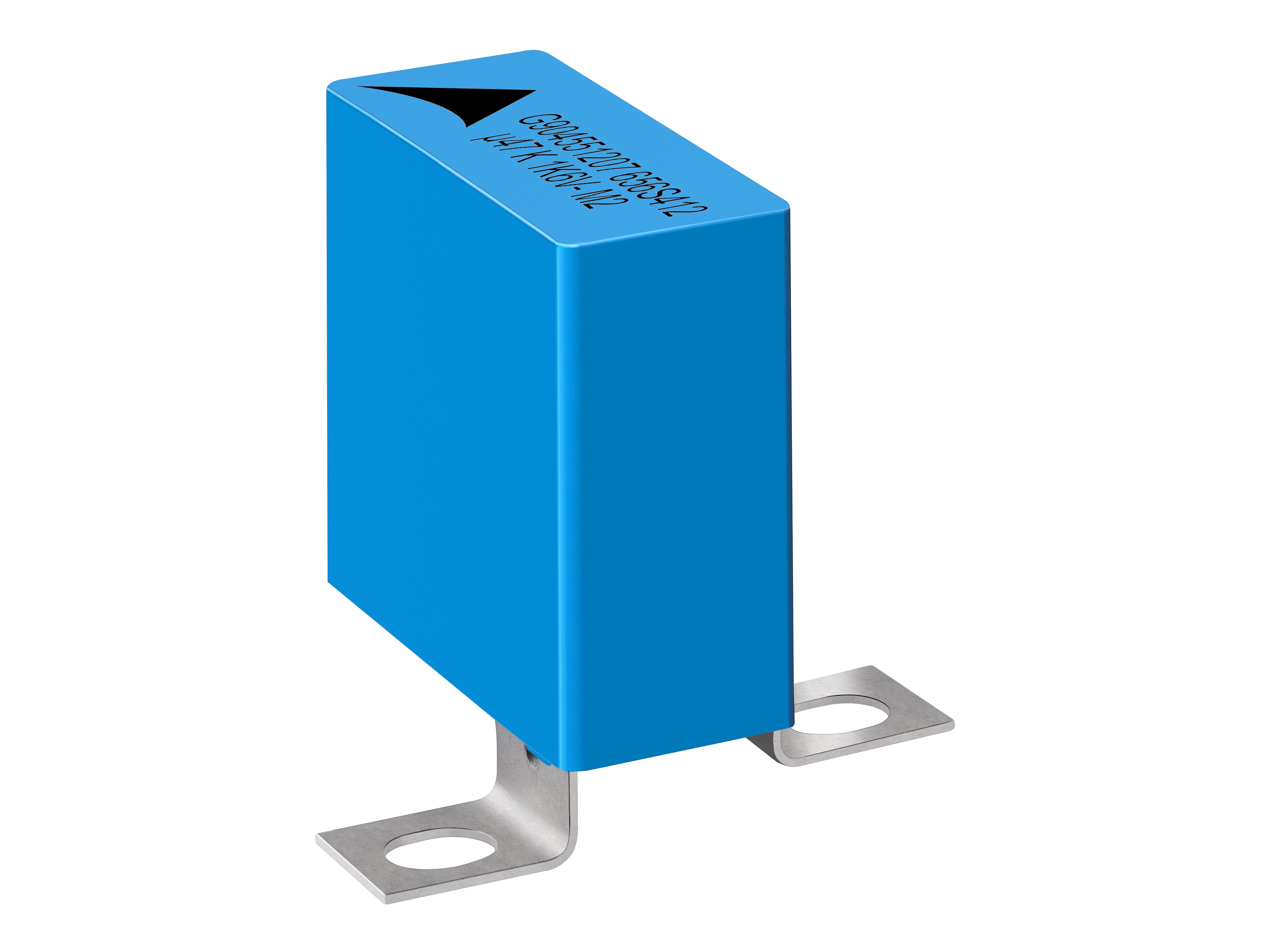 Figure 2. the EPCOS snubber capacitors have been mechanically and electrically tailored to the Semikron SkiiP®4 modules.

As shown in Figure 3, the geometry's adaptation made it possible to screw the capacitors directly onto the module’s busbar connectors, leading to lower leakage inductance of the DC link. The significantly lower overvoltages that were achieved during double-pulse tests as a result (measurements: Mankel-engineering.de) speak for themselves and make it possible to operate the SkiiP®4 module with a much higher output current even with less improvable DC link constructions.

Figure 3. Simplified wiring diagram for the SkiiP®4 module as a half-bridge with the EPCOS DC link snubber capacitors

The optimized housing shape as well as the snubber capacitor connections and their different heights allow for the lowest possible insertion inductance and therefore the very effective performance of the snubber capacitor. This optimization does not lead to the reduction of creepage and clearance paths. At the same time, it allows the optimal usage of the existing construction space. Less optimized snubber capacitors would end up losing capacitance. In critical situations, maintaining the snubber capacity and ensuring its stability is crucial to prevent damage to the IGBT modules. Figure 4 clearly shows the effect of the EPCOS special-snubber capacitors connected to the SkiiP®4 modules when powering off a current of 2500 A. 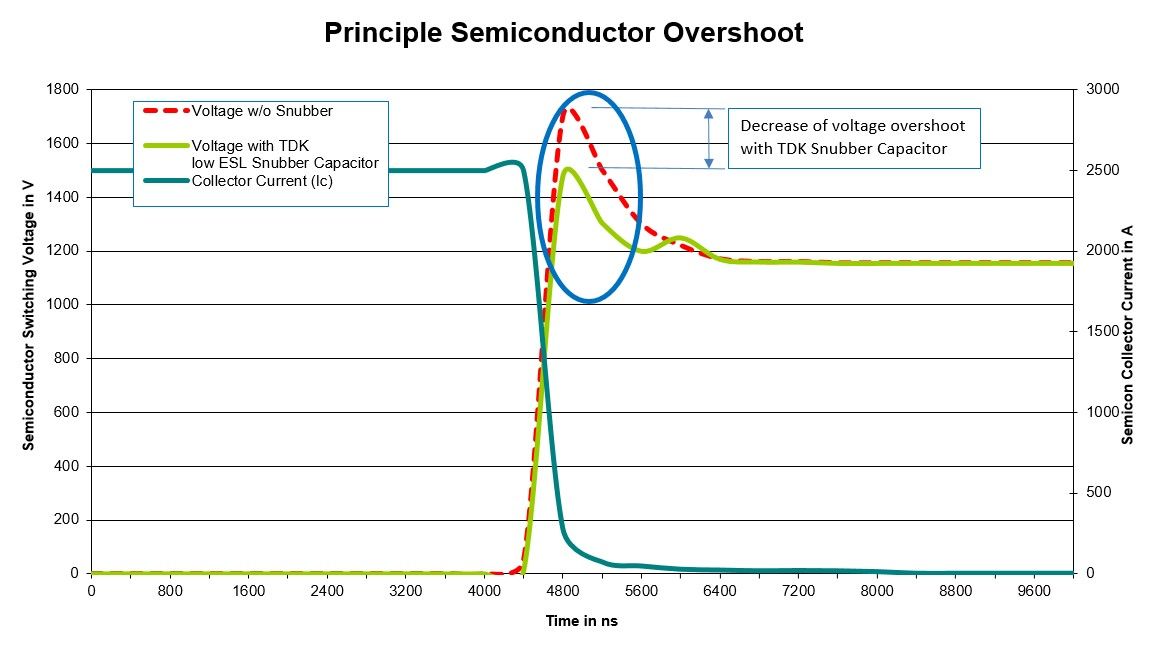 Figure 4. Thanks to the EPCOS snubber capacitors, the voltage overshoot that occurs when quickly turn off the current of 2500 A is reduced by more than 200V.