The article provides a brief overview about the world of LEDs, how they are used inside lamps, and how they can be connected to obtain the requested power.

This article presents a complete overview of power LED properties (optical and electrical). After an introduction to the color perception of the human eye to explain the basic concepts behind the color representation commonly adopted in the power LEDs datasheets, the most important characteristics and parameters of light sources are presented.

Understanding the Color Perception of the Human Eye

Inside the human eye, there are two types of photoreceptors involved in sight: rods and cones. While rods are used for very low levels of light (night vision) and provide a sort of grayscale image, cones are used to see colors. 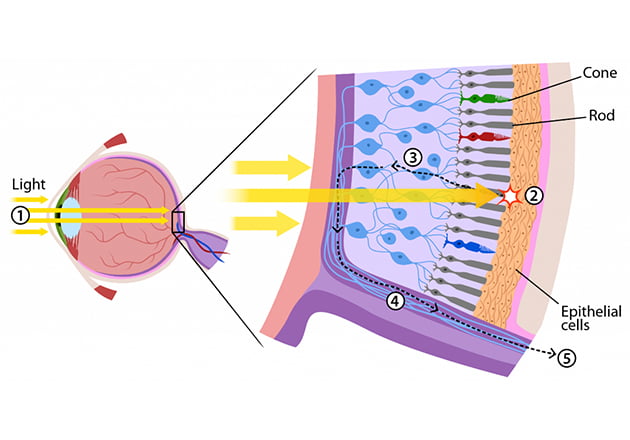 Figure 1. Light is absorbed by rods and cones at the back of the human eye 1.

There are three types of retinal cones: red, green, and blue. The sensitivity of each cone is dominant for red, green, or blue wavelengths.

In 1931 the International Commission on Illumination (CIE) created the CIE 1931 XYZ color space that defines a color representation based on the perceived colors in the human vision. After a series of experiments with human observers, CIE defined three color matching functions to describe the chromatic response perceived by a CIE standard observer. 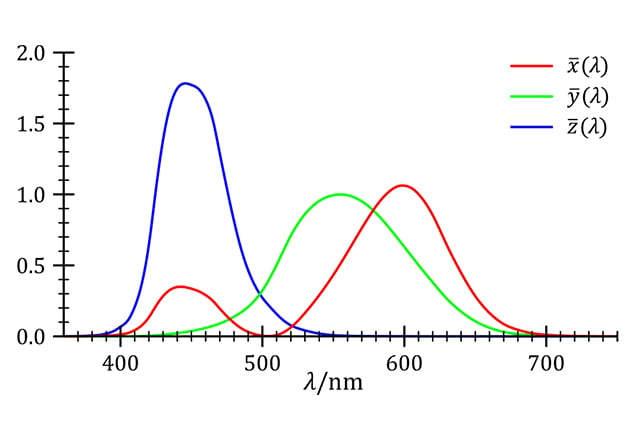 For an incident spectral power distribution P(λ), the color perception is defined by a combination of three tristimulus values XYZ calculated as follow:

Since the color is defined by three values, a full plot of a visible color is a three-dimensional figure. CIE adopted a method to simplify the color representation. They divided the concept of color into two parts: brightness and chromaticity. To explain the meaning of both definition we can consider a white color, that is a bright color, and grey that is considered to be the less bright version of white. The chromaticity of white and grey is the same, while they have different brightness.

The results of experiments considered by CIE showed that the brightness of the color perceived by the human eye comes mainly from the Y component. They used this particularity of human’s color perception to adopt an alternative color representation where the Y component is considered as a measure of the luminance of the color. The chromaticity is then specified by two parameters x and y derived from the normalized tristimulus values X, Y, Z:

As a result, each combination of x and y defines a color that can be represented on a two-dimensional figure, while Y defines its luminance. The CIE 1931 (x,y) chromaticity diagram is a plot of colors in the (x,y) color space that are perceptible from the human eye. 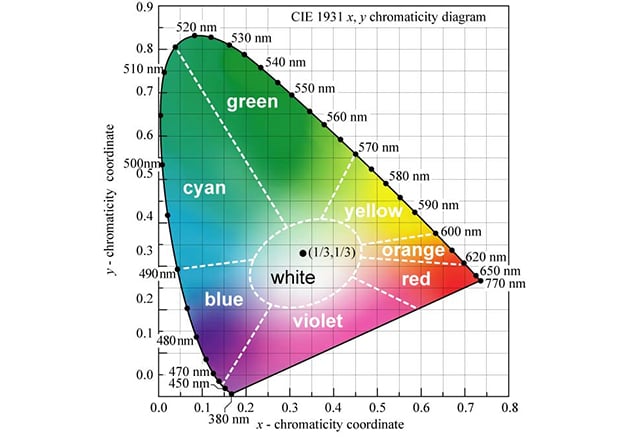 In the CIE 1931 (x,y) chromaticity diagram the monochromatic colors are located on the perimeter, while the white color is located in the center. The color saturation decreases toward the center of the diagram.

Characteristics and Properties of Lighting Sources

Since the color perception is essentially an additive function of the color space, it can be that two light sources that have the same apparent color (same XYZ tristimulus values, no matter of spectral distribution of light to produce them) are made up of different wavelengths.

This concept is often not known by LED users, but it is well known by LED manufacturers. For example they make LEDs obtaining the same perceived white light from an RGB led (three different light emitters combined together) or from a led built from a blue light emitter and a yellow phosphor reflector. 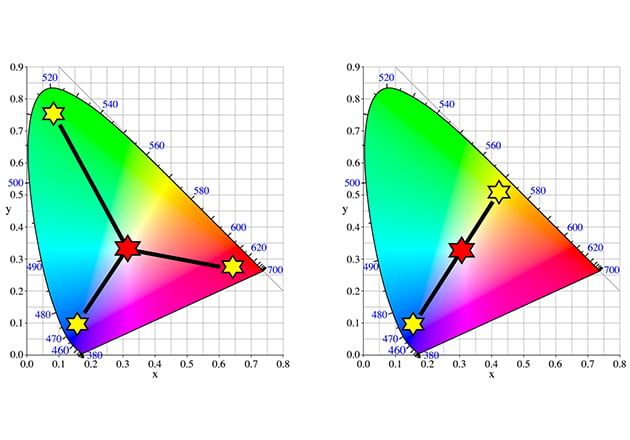 White LEDs are the most part of LEDs used in the world (street lighting, indoor lighting, portable lams, etc). All we know there are different white tonalities that are typically adopted for different applications.

An important parameter to classify the tonalities of white LEDs is CCT – Correlated Color Temperature. A black body radiator is an idealized object that emits radiation when heated and a portion of the resulting spectrum is visible light.

When metals are heated to extremely high temperatures, they become red, then yellow, then white. The black body line (or Planckian locus) provides a method to characterize the white light sources. 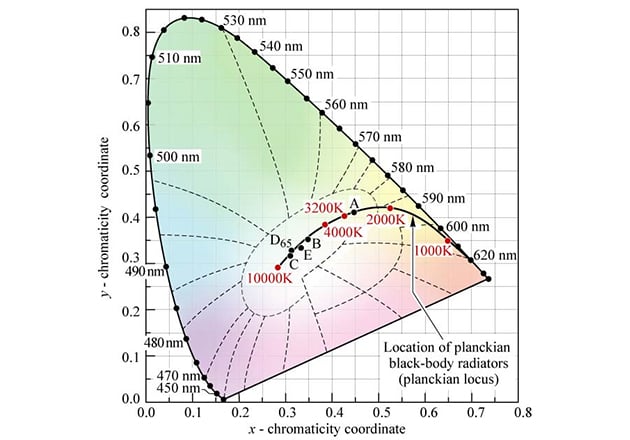 In the production of light sources, one important aspect to consider is the reproducibility of the emitted color. The produced LEDs will have tolerances and each LED will have a white tonality that will be different from the others.

David McAdam conducted a set of experiments to document the differences in color perception from different users. Around 1940 he showed that users tend to cluster their perception of similar colors into ellipses in the CIE (x,y) color space. He named the ellipse containing colors that are indistinguishable to the average human eye, around a reference color, as 1-step ellipse. Other concentric ellipses around the same reference color are named 2-step, 3-step, 4-step, etc.

ANSI defined the standard C78.377-2008 where originally it was created the binning for CFL lights based on the 7-step McAdam ellipse. These bins are centered on the black body line and ANSI classified them as parallelograms sized and oriented to approximately enclose a McAdam ellipse. 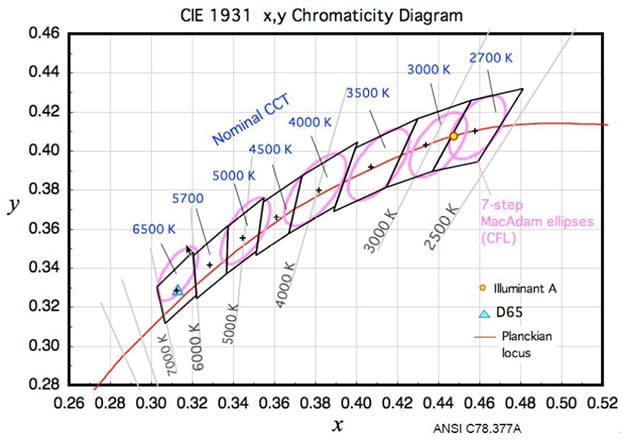 Today, after passing from CFL lights to LED lights, the binning based on the 3-step McAdam ellipse is commonly the smallest offered by LED manufacturers.

Another fundamental optical parameter in the LED world is CRI – Color Rendering Index. Each object appears of a specific color that is the result of the spectral composition of the light source that illuminates the object and how the object reflects that light.

For light sources where some wavelengths dominate over others, the CRI value is lower (i.e. 70%) because the associated colors reflected from the objects result as altered if compared to the ideal ones that would result with an ideal light source.

In common LED lighting applications a CRI 70% is common as a typical value, while CRI 80% or higher is considered to be a very good value.

Summarizing the Characteristics of Power LEDs

The first part of the article presented an overview of the optical properties of power LEDs, including an introduction to the principles of the human eye color perception, that represent the background required to understand the terminology and parameters of colorimetry, that is commonly used in the LEDs datasheets.

Want to learn more about LED characteristics? Read more from this author.