Last month's Mobile World Congress once again brought with it a wave of overwhelming innovations from the wearables sector. However, one thing is still lacking to make many of those innovative products commercially viable - a powerful and reliable energy source. Efforts are underway in the U.S. and Europe to develop energy harvesting technologies to meet that growing need.

The recently launched Smart2Go project, funded by the EU as part of the Horizon 2020 program, focuses precisely on this challenge - the development of an autonomous energy supply platform. And at last year's IEEE Applied Power Electronics Conference, Face International Corp. debuted a technology demonstration of it's Evercell™ thermal energy harvester that operates with no perceptible thermal differential in essentially any environment where the temperature is above absolute zero (minus 460° F).

The special feature of the three-year Smart2Go project is the modularity of the components within the platform. This will enable manufacturers to easily adapt it to various different applications after the end of the project.

Additionally, the type of energy harvesting can be changed as well, further extending the variability of the platform. This concept is a major part of the expected impact of the project results. At the same time, this is the unique point that distinguishes the project from various other activities in this area.

Evercell™ harvests thermal energy to generate a very small (initially to be 5 µW), nonstop flow of electricity, enough to power tens of millions of wearable devices and billions of devices in the Internet of Things, while keeping billions of toxic dead batteries out of the world's landfills.

"Spectroscopic analysis shows that there are no battery-like materials in Evercell, as skeptics have speculated," Face added. 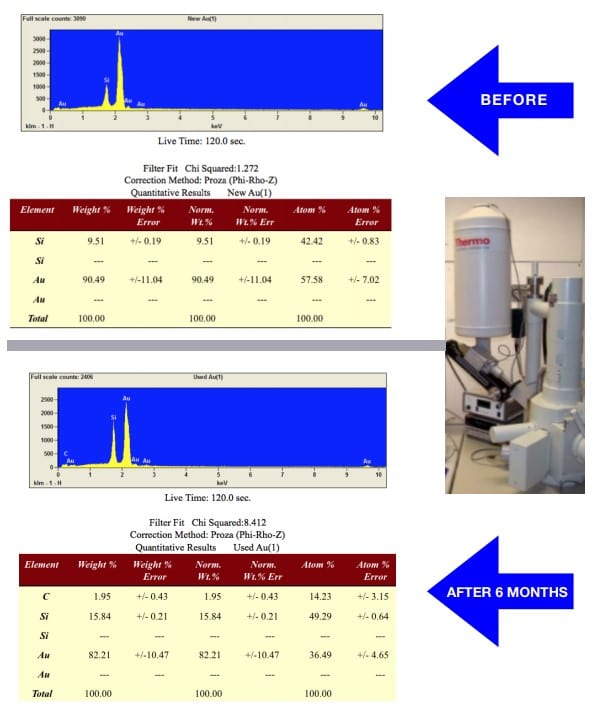 The Energy Dispersive Spectroscopy (EDS) Unit was used to detect battery-like chemical products in an Evercell™ power cell that had been producing power under load continuously for six months. A new gold (Au) electrode was compared with the gold electrode that had been producing power before the cell was disassembled for this test. The small amount of carbon in the used electrode is contamination from the spacer that was part of the assembly. These results show that the gold electrode was not oxidized while producing a negative potential and delivering current to the load. Testing on the platinum (Pt) electrodes also showed no change. (click on image to enlarge)

"Trade-offs of availability are not well received for energy harvesting solutions. Light is not always available for photovoltaic harvesters, adequate thermal gradients may not be reliably available for thermal harvesters. Those trade-offs of availability are one of the biggest challenges to the adoption of energy harvesting in many cases," observed George Brocklehurst, Research Director for Power and Energy at Gartner when he first heard about Evercell™ in 2018.

"The Evercell™ sounds promising. I can't comment on the physics, but if it gets into production, it sounds very exciting and, accompanied by ultra-low power microprocessor technology, could be an enabling technology," stated Brocklehurst. "I'm adding Face to the list of thermal energy harvester vendors in the 2018 edition of Gartner's Hype Cycle report." 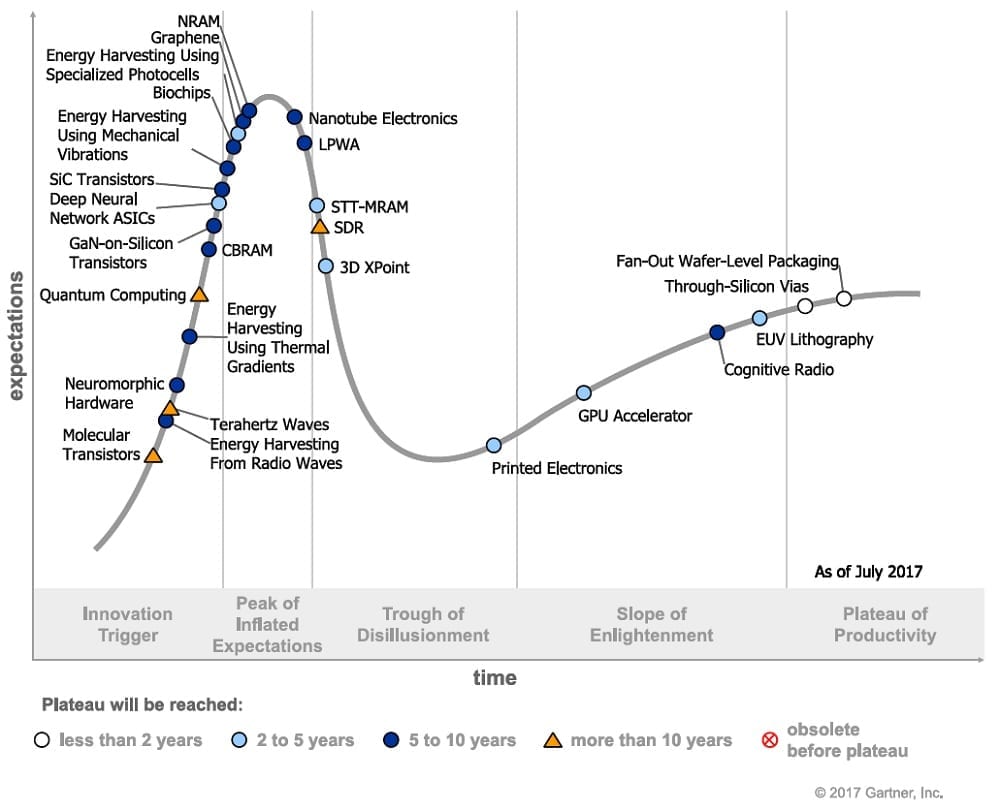 Technologies included in Gartner's Hype Cycle are selected on the basis of current market momentum, industry interest and analyst preference. These technologies are yet to be widely adopted in order to develop their value proposition, but Gartner views these technologies as having significant potential in the future.

Thermal energy harvesting has been identified in Gartner's Hype Cycle as one of a handful of "Innovation Triggers" that will "offer substantial rewards for those organizations that can successfully leverage their value proposition in enabling killer applications."

The EU's Smart2GO is also aiming for the development of a game-changing approach to powering wearables and IoT devices. Organizations participating in the EU's Smart2GO project include:

At the Wearable Europe Show 2019 the Fraunhofer FEP as project coordinator will present the project and its competencies and objectives at booth no. P12, 10 - 11 April 2019 in Berlin, Germany.

The widespread use of electronic devices worn on the body - wearables - is expected to be one of the major trends in the next one or two decades. First applications have already entered the market, like e.g. smartwatches or various types of fitness trackers. However, the main booming period is still expected to happen in future.

Health care applications, internet of things as well as reshaping of the interaction between humans and electronic devices will be the main drivers for this development. Presently various obstacles still hinder the expected rapid development.

The Smart2Go project is exactly targeting this topic. The aim of the project is the creation of an autonomous energy-supply platform. Based on the results of the project it will be possible to use a wearable without caring about recharging over its entire lifetime.

This aim will be achieved by the combination of a powerful battery with appropriate energy harvesting technologies. The performance of the energy supply platform will be demonstrated in two application cases.