Researchers Look to Develop a Method for Mass Adoption of Graphene

Researchers Look to Develop a Method for Mass Adoption of Graphene

A European research team has recently released their findings on the real-time multiscale monitoring and tailoring of the growth of graphene on liquid copper. 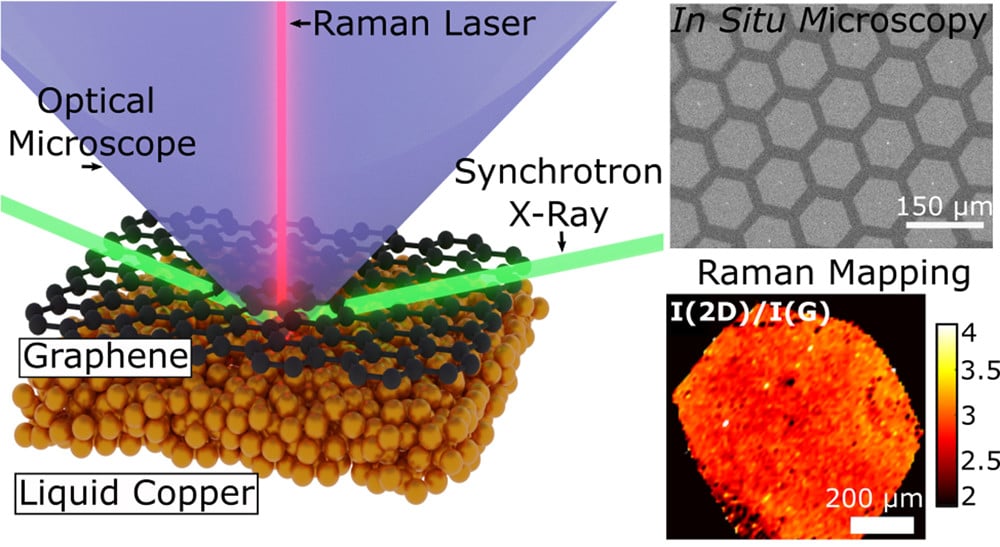 An illustration of the experimental setup, in situ microscopy, and Raman mapping on the layer.  Image courtesy of ACS nano.

Graphene has a thin hexagonal arrangement of carbon. Due to this arrangement graphene has a high electrical conductivity property. Therefore, graphene is expected to be a major material used in several applications ranging from the biomedical industry into energy and electronic manufacturing industries and more.

The experiment needed a specific setup to ensure the growth of graphene on liquid copper. Also, specific observation methods were used.

The researchers used this setup to perform the experiment:

To form the liquid copper, the researcher molted ultrapure foils of copper after adding them to the sample holder.

To monitor the process the researchers used three observation methods:

This project (LMCat) has received funding from the European Union’s Horizon 2020 research and innovation program under grant agreement 736299. Some research leading to this publication has been supported by the project CALIPSOplus under Grant Agreement 730872 from the EU Framework Programme for Research and Innovation HORIZON 2020.