DOE Offers Over $3B for Hydropower, Mine Transformation & Grid Resilience Projects

DOE Offers Over $3B for Hydropower, Mine Transformation & Grid Resilience Projects

The Department of Energy recently unveiled another batch of funding for clean energy projects totaling more than $3 billion.

The Department of Energy (DOE) just announced a slew of funding—nearly $3.5 billion in total—to transform former or current mine lands into clean energy hubs, modernize the country's hydropower infrastructure, and help states and tribal nations improve their power grids.

The trio of new funding programs draw from the coffers of the Bipartisan Infrastructure Law, signed last November, which allocates over $62 billion for 60 clean energy programs, including 16 demonstration projects, 32 deployment projects and a dozen existing R&D programs.

EE Power will dive into the new programs below.

Of the three programs covered here, the DOE’s $2.3 billion formula grant claims the heftiest price tag. It will provide $459 million annually over five years to states and tribal nations to improve the resilience of their electric grids against wildfires, natural disasters and other extreme weather events. This could include anything from utility pole upkeep and tree removal to undergrounding electrical equipment and relocating power lines.

Severe weather-induced power outages have doubled over the last 20 years, with the average outage hitting a peak of eight hours in 2020, per estimates from the Energy Information Administration (EIA). One may recall last year’s storm season when Hurricane Ida cut electricity for 1.2 million customers in eight states. In some parts of Louisiana, those outages extended for more than a week.

In addition to weather-related upgrades, the new DOE funding could be used for adding fire-resistant components, real-time monitoring, controls and advanced modeling, and distributed energy resources and storage.

According to the DOE’s funding opportunity announcement, states and tribes will be required to match 15% of the amount of each grant. Recipients can grant sub-awards to electricity and storage operators, transmission owners/operators, distribution providers and fuel suppliers. Those sub-award recipients must match 100% of the funding unless they sell less than 4 million megawatt-hours (MWh) of electricity per year, which reduces the match requirement to one-third of the subaward.

Applications for the program close on Sept. 30.

Hydropower Projects Get a Boost

The DOE is also offering $628.6 million in incentives for capital improvement projects at hydropower facilities. It’s channeling funding through two programs managed by the DOE’s Grid Deployment Office: One provides $553.6 million in incentive payments for grid resiliency, dam safety and environmental improvements, while the other doles out $75 million to owners/operators of existing hydroelectric facilities for improvements targeting at least a 3% increase in efficiency.

In its request for information issued in late-June, the DOE said it seeks feedback from stakeholders and officials on timing, structure, definitions and selection criteria. Comments are due on Sept. 6.

Per EIA estimates, the nation’s hydropower grid currently accounts for 6.3% of all electricity and nearly a third of renewable generation, totaling 260 terawatt-hours in 2021. Though hydropower was once the largest source of clean energy generation in the U.S., competing renewables have since stepped up to take its place.

Still, about 1,450 conventional and 40 pumped-storage hydropower plants are currently operating nationwide, though many require efficiency upgrades and other improvements to integrate with other renewables. After all, hydroelectric facilities are among the oldest power generators in the U.S., with the average site operating for 64 years, according to EIA data from 2016.

The DOE allocated another $500 million over five years to fund clean energy demonstration projects on current or former mines across the country. The program will support land conversion projects involving solar, microgrids, geothermal, direct air capture, energy storage, advanced nuclear and fossil-fuel generation with carbon capture. In the request for information, the DOE said it would support the construction of two to five such projects, with at least two being solar.

A report released by the Environmental Protection Agency earlier this year counted nearly 18,000 mine land sites spanning 1.5 million acres across the U.S. that have the potential to unlock 89 gigawatts of renewable energy for millions of homes. The report cited an example in Vermont’s Elizabeth Mine Solar site, a $65 million solar development located on 28 acres of abandoned copper mine land. The 7-MW facility, a project of New York-based Greenwood Sustainable Infrastructure, began operating in December 2017. 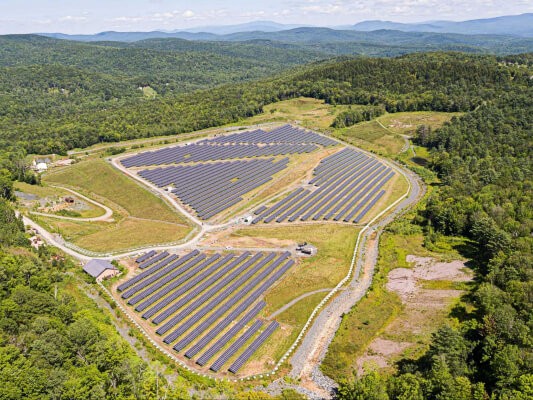 This 7-megawatt solar farm sits atop an abandoned copper mine in Vermont. Image used courtesy of Greenwood Sustainable Infrastructure

There aren’t many projects quite like this in the U.S., so the DOE’s incentives may spur more activity. The agency seeks feedback on its request for information by Aug. 15. It expects to send out proposal solicitations in 2023.