?Solar panels have become one of the technological hallmarks of modern society. The rectangular black panels are found on increasing numbers of home rooftops and commercial buildings and in solar farm fields serving whole communities. But what if you don’t like black?

Solar panels in alternative colors have been available for some time, but colorful panels have been both expensive and significantly less efficient than those in traditional black. That may be changing, however, as new technologies to make solar energy more colorful are being developed. 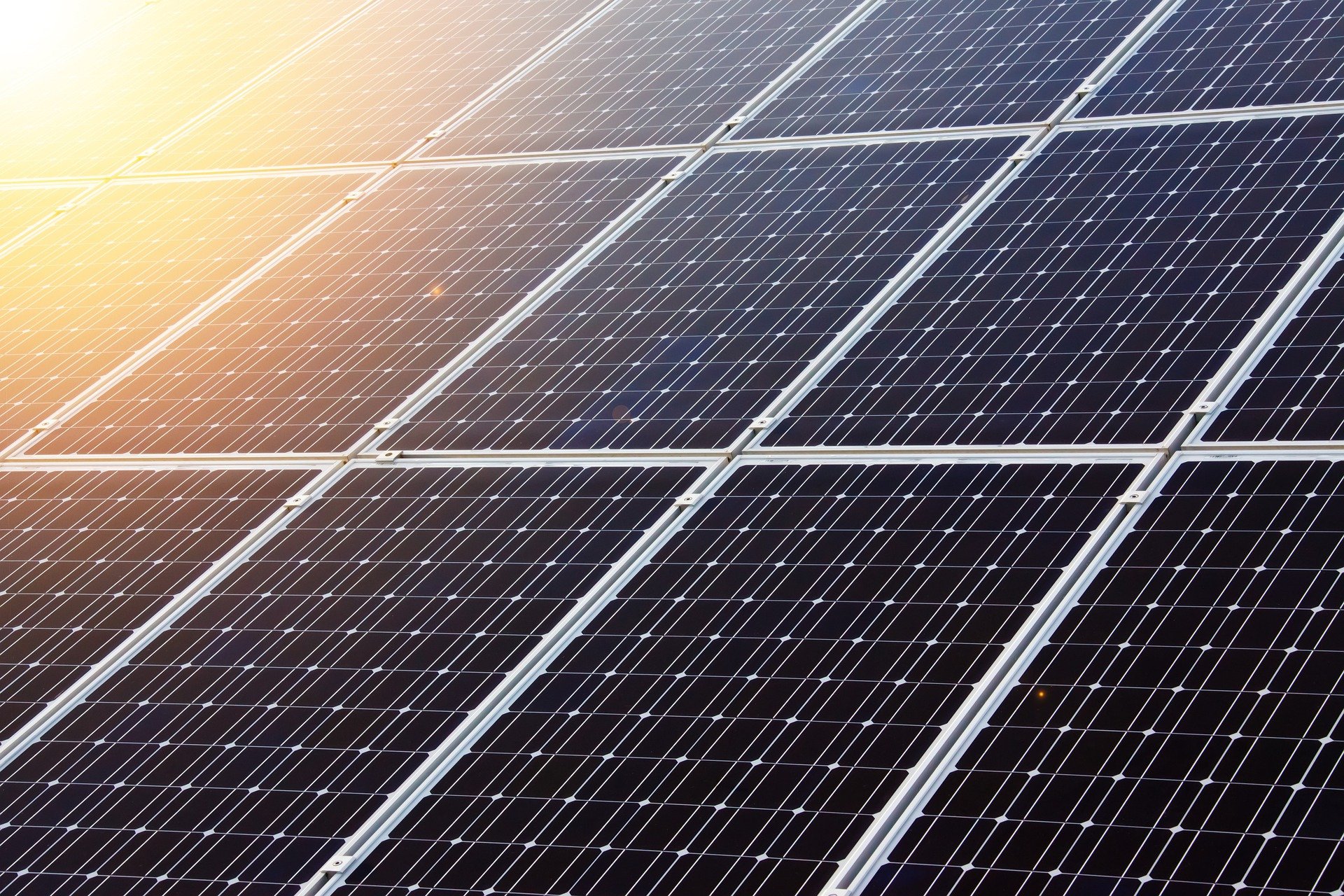 Why are Solar Panels Black?

Solar panels are black because that is the natural color of the silicon after it has been manufactured into a solar panel. Actually, monocrystalline solar cells—where each solar cell is made from a single silicon crystal—are black. These are the most efficient commercial solar panels, and the black color of the cells helps them absorb the greatest amounts of energy.

Some commercial solar cells are a bluish color—these are made from polycrystalline silicon with a single cell containing several individual crystals. The blue color results from how the crystals interact with sunlight. Because there are multiple crystals, the conduction of electrons is slower and polycrystalline cells are less efficient than monocrystalline types but can be somewhat cheaper. 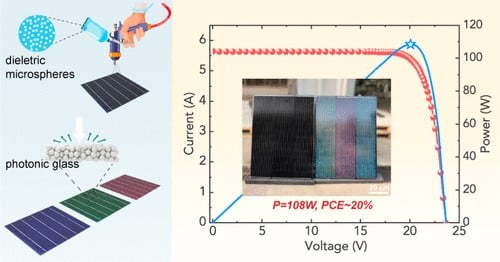 Solar panels in various colors can be created using tiny spheres embedded on the surface of the panel. Image used courtesy of ACS Nano

From an engineering perspective, making colorful solar panels might seem frivolous. However, some customers are put off by large expanses of black panels, or businesses might be looking for panel colors that blend into a theme of a building or company logo. Some local homeowner associations might also have rules regarding the colors that can be used for roofing, so providing solar panels in colors other than black or blue could provide a solution.

Remember that Henry Ford said his Model T automobile could be had “in any color as long as it’s black.” By offering only one hue, Ford was able to make his production line more efficient, dramatically reducing the price of his Model T. Eventually, even the iconoclastic Henry Ford bowed to customer pressure and offered the Model T in a variety of colors.

Initially, when customers wanted solar panels other than black, or with a bluish tint, specialist manufacturers were willing to oblige by coating them with a translucent paint or dye. This not only made the panels more expensive but, by blocking part of the light reaching the panels, also reduced the solar panel efficiency, sometimes by as much as 45 percent.

Cutting the amount of energy a solar panel can produce increases the time required to pay back the cost of the panels and their installation, so this method of coloring solar panels wasn’t such a good idea. In addition, the coatings and dyes would fade over the 15–20-year lifetime of the solar panel, resulting in a loss of aesthetic appeal.

Researchers in the Netherlands have developed bright green solar cells by integrating the silicon solar cells with dielectric nanoscatterers made up of nanocylinders of crystalline silicon printed onto the solar cell surface. The cylinders are 100-120 nanometers (nm) wide and 240 nm tall. They scatter the light in a way that produces a green color over a range of angles (8° to 75°) and result in a loss of only 10-11 percent in efficiency.

The silicon nanotubes that are printed onto the surface of the panels can be adjusted to change the way the light is scattered to produce different colors. Because the primary colors of red, green, and blue can be created, almost any other color can also be created on the panels.

A group at Hong Kong University in China is also looking at structural sources of color on the surface of solar panels. The team has taken advantage of microscopic shapes that only reflect a narrow, selective portion of light, producing a color.

The team sprayed a thin disorderly layer of dielectric microscopic zinc sulfide spheres, a material they called photonic glass, onto the surfaces of solar cells. Most of the light passes through the photonic glass, however, selective colors were reflected based on the sizes of the spheres. The researchers created solar panels with blue, green, and purple hues while only dropping the efficiency by about 1 percent.

Using standard durability tests the Hong Kong team also found that solar panels manufactured with a layer of photonic glass maintained their color and performance. The team is looking at how to make the colors more vibrant and saturated and to produce a wider range of colors, along with scaling up fabrication techniques.

Going a different direction, in 2017 Tesla announced it would produce solar panels that look like regular roofing tiles. Replacing traditional shingles, the company initially indicated the tiles would be available in various textures and implied several colors would also be produced. That hasn’t happened as the currently commercially available Tesla Solar Roof tiles are available only in blue and dark blue, and black and in only a smooth texture. The standard Tesla solar panels, at present, are only available in black.

Residential and commercial buildings in the U.S. use 74 percent of all electricity and 39 percent of all energy. Heat generated by sunlight streaming through windows creates the biggest need for air conditioning and cooling in buildings. 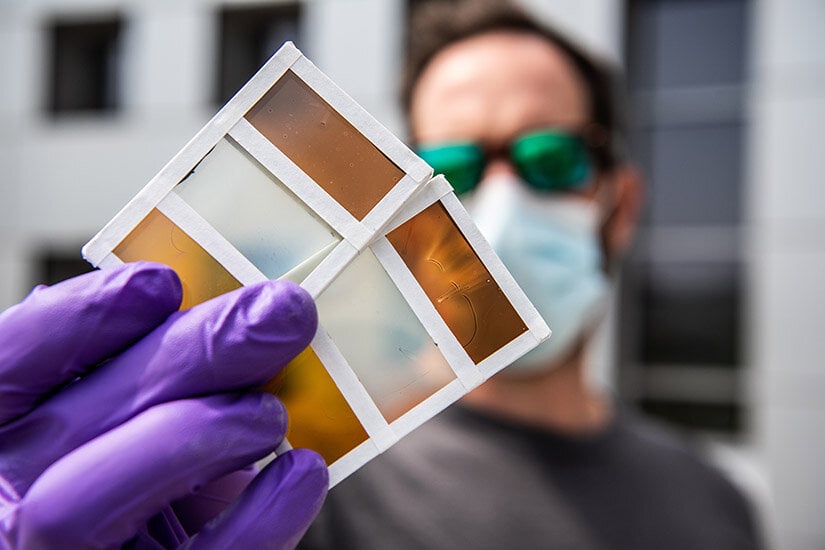 One solution might be “thermochromic photovoltaic” technology under development by the National Renewable Energy Laboratory (NREL). The concept is to allow windows to change color when the glass gets warm on a hot, sunny day, blocking some of the sun’s rays. A first-generation solar window was able to switch back and forth between transparent and reddish-brown colors but required temperatures between 150 degrees and 175 degrees Fahrenheit for the transformation to occur. The latest versions developed by NREL have a broader range of colors and require between 95 degrees and 115 degrees Fahrenheit for the transformation, the sort of temperature that glass reaches on a sunny day. The researchers also were able to speed up the transformation from over three minutes on early versions to about seven seconds in the latest iteration.

To generate solar power, a thin film of perovskite crystals can be sandwiched between layers of glass that produce photovoltaic electricity from the sunlight. Perovskites are crystal minerals that can harness sunlight and convert it into electricity. Currently the subject of intense research, they have the potential to replace silicon at a lower cost and with greater efficiency.

The NREL scientists place a thin perovskite film between two layers of glass and inject water vapor to change the internal humidity. This creates a reaction that causes the perovskite to arrange itself into different shapes, ranging from a chain structure to a sheet, or even a cube. The changing shapes cause different colors to emerge and lowering the humidity returns the perovskite to its normal transparent state.

The use of solar panels, solar roofing tiles, and even photovoltaic windows can help turn residential and commercial buildings into electricity generators and allow them to contribute to building a more robust and sustainable electrical power grid. If adding a color palette to replace the solar panel’s basic black makes acceptance easier for architects, decorators, homeowners, and end users, and the result is more solar power on the grid, the efforts going into solar colorization will be worth it.