3-D Printed Objects Connect to WiFi without Electronics or Batteries

3-D Printed Objects Connect to WiFi without Electronics or Batteries

Imagine a bottle of laundry detergent that can sense when you’re running low on soap — and automatically connect to the internet to place an order for more.

University of Washington researchers are the first to make this a reality by 3-D printing plastic objects and sensors that can collect useful data and communicate with other WiFi-connected devices entirely on their own.

With CAD models that the team is making available to the public, 3-D printing enthusiasts will be able to create objects out of commercially available plastics that can wirelessly communicate with other smart devices.

That could include a battery-free slider that controls music volume, a button that automatically orders more cornflakes from Amazon or a water sensor that sends an alarm to your phone when it detects a leak. 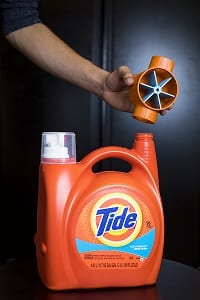 UW engineers have developed the first 3-D printed plastic objects that can connect to WiFi without electronics. The attachment above can sense when your laundry soap is running low — and automatically order more. Mark Stone, University of Washington

“Our goal was to create something that just comes out of your 3-D printer at home and can send useful information to other devices,” said co-lead author and UW electrical engineering doctoral student Vikram Iyer. “But the big challenge is how do you communicate wirelessly with WiFi using only plastic? That’s something that no one has been able to do before.”

The system is described in a paper presented Nov. 30 at the Association for Computing Machinery’s SIGGRAPH Conference and Exhibition on Computer Graphics and Interactive Techniques in Asia.

To 3-D print objects that can communicate with commercial WiFi receivers, the team employed backscatter techniques that allow devices to exchange information. In this case, the team replaced some functions normally performed by electrical components with mechanical motion activated by springs, gears, switches and other parts that can be 3-D printed — borrowing from principles that allow battery-free watches to keep time.

Backscatter systems use an antenna to transmit data by reflecting radio signals emitted by a WiFi router or other device. Information embedded in those reflected patterns can be decoded by a WiFi receiver.

In this case, the antenna is contained in a 3-D printed object made of conductive printing filament that mixes plastic with copper.

In this backscatter system, an antenna embedded in a 3-D printed object (middle) reflects radio signals emitted by a WiFi router (left) to encode information that is “read” by the WiFi receiver in a phone, computer or other device (right). photo: University of Washington (click on image to enlarge)

Physical motion — pushing a button, laundry soap flowing out of a bottle, turning a knob, removing a hammer from a weighted tool bench — triggers gears and springs elsewhere in the 3-D printed object that cause a conductive switch to intermittently connect or disconnect with the antenna and change its reflective state. 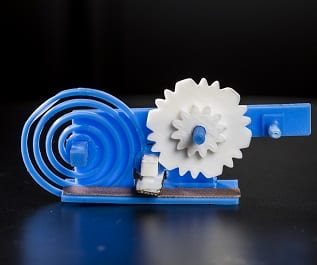 The 3-D printed gears (in white) and spring (blue spiral) toggle a switch (white box with grey surface) made of conductive plastic. The switch changes the reflective state of a 3-D printed antenna (gray strip) to convey useful data to a WiFi receiver. The shape of the gears and the speed at which they move encode the digital data. Mark Stone, University of Washington

Information — in the form of 1s and 0s — is encoded by the presence or absence of the tooth on a gear. Energy from a coiled spring drives the gear system, and the width and pattern of gear teeth control how long the backscatter switch makes contact with the antenna, creating patterns of reflected signals that can be decoded by a WiFi receiver.

“As you pour detergent out of a Tide bottle, for instance, the speed at which the gears are turning tells you how much soap is flowing out. The interaction between the 3-D printed switch and antenna wirelessly transmits that data,” said senior author Shyam Gollakota, an associate professor in the Paul G. Allen School of Computer Science & Engineering. “Then the receiver can track how much detergent you have left and when it dips below a certain amount, it can automatically send a message to your Amazon app to order more.”

The team from the UW Networks & Mobile Systems Lab 3-D printed several different tools that were able to sense and send information successfully to other connected devices: a wind meter, a water flow meter and a scale. They also printed a flow meter that was used to track and order laundry soap, and a test tube holder that could be used for either managing inventory or measuring the amount of liquid in each test tube. 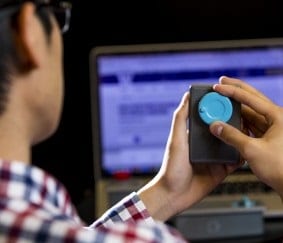 The UW team also demonstrated how to use the magnetic properties of some 3-D printed material to invisibly encode static data in the objects above, which could be useful for inventory tracking or to help robots interact with them.Mark Stone/University of Washington

Using a different type of 3-D printing filament that combines plastic with iron, the team also leveraged magnetic properties to invisibly encode static information in 3-D printed objects — which could range from barcode identification for inventory purposes or information about the object that tells a robot how to interact with it.

“It looks like a regular 3-D printed object but there’s invisible information inside that can be read with your smartphone,” said Allen School doctoral student and co-lead author Justin Chan. 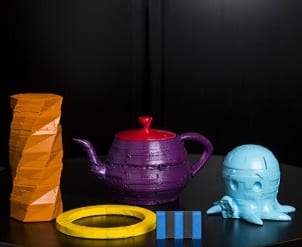 The UW team also demonstrated how to use the magnetic properties of some 3-D printed material to invisibly encode static data in the objects above, which could be useful for inventory tracking or to help robots interact with them. Mark Stone, University of Washington

The research was funded by the National Science Foundation, the Alfred P. Sloan Fellowship and Google.