Further, AES certified the PS250X and PS6120 as DO-160 compliant—meeting the more than 25-point stringent Standard of the Radio Technical Commission for Aeronautics (RTCA). This Standard assesses system impact and performance under various external and internal conditions on aircraft—ranging from pressure and temperature to voltage spikes and RF emissions.

The flagship 500 W PS250X is the industry’s first passively cooled power supply at 420 W and deploys Transphorm’s GaN in a single-phase CCM boost power factor correction (PFC) topology. It offers more than 92 percent overall system efficiency at full load, which is more than 10 percent greater than its competition. The system also yields a more than .98 power factor and 200 mVpp nominal at 115 VAC/400 Hz input at full load. All within an end product that is 1.4 kg (~3 lbs). 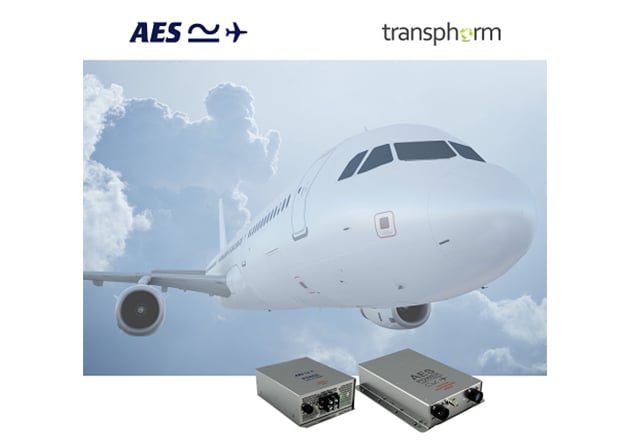 The 1200 W PS6120 deploys Transphorm’s GaN in a fan-cooled, three-phase CCM boost PFC topology. It offers more than 91.5 percent overall system efficiency at full load, which is 11.5 percent greater than its competition. The PS6120 also yields the same power factor and nominal ripple voltage at 115 VAC/400 Hz input at full load as the PS250X 500 W PSU. All within an end product that is 4.0 kg (~8.8 lbs).

“The aviation industry is working toward reducing climate impact through any means possible,” said Dr. Andreas Hammer, Head of Competence Center Power, AES. “Considering, we sought out Transphorm’s GaN to replace previously used Silicon MOSFETs so that we could provide a more efficient, lighter weight power supply. These supplies have the potential to make a notable impact when considering each aircraft deploys several such PSUs. After only a year of redesign, we were able to offer our customers a better power solution, while also raising the performance bar within our own industry.”

Interested in the technology’s inherent higher switching frequency, AES reviewed GaN power switch converters from several GaN device semiconductor manufacturers. The company ultimately selected Transphorm’s 650 V GaN technology due primarily to its ease of drivability and designability—specifically because Transphorm’s GaN FETs do not require custom drivers. As a result, system design is simplified while engineers can drive the switches using technology they are already familiar with (i.e. drivers and packages). Other factors affecting AES’ selection included Transphorm’s proven reliability—which is underscored by its GaN platform earning both a JEDEC qualification and AEC-Q101 qualification at 175°C.

“Transphorm designed its GaN devices to enable designers, not challenge them,” said Philip Zuk, VP of Worldwide Technical Marketing and NA Sales, Transphorm., “Our two-switch normally-off GaN devices come in standard packages and require minimal supporting circuitry to drive them, which reduces the overall system size, increases reliability, and simplifies design. It’s crucial to us that our customers can come to market quickly with a product they have confidence in. We’re honored to be AES’ GaN supplier of record and are proud that they appreciate the work we’ve done to bring the benefits of GaN technology to the masses.”

Transphorm is a global semiconductor company, leading the GaN Revolution with the highest performance, highest reliability GaN devices for high voltage power conversion applications. To ensure this, Transphorm deploys its unique vertically-integrated business approach that leverages the industry’s most experienced GaN engineering team at every development stage: design, fabrication, device and application support. This approach, backed by one of the industry’s largest IP portfolios with over 1000 patents, has yielded the industry’s only JEDEC- and AEC-Q101-qualified GaN FETs. Transphorm’s innovations are moving power electronics beyond the limitations of silicon to achieve over 99% efficiency, 40% more power density and 20% lower system cost—and here’s how we do it.