The units operate from 85 to 265VAC inputs with outputs at either 2.5, 5 or 8 watts and offer user-selectable output voltages

The RAA2230XX series of three buck regulators all feature an internal 700 volt MOSFET. They can provide outputs as low as 3.3 volts, eliminating the need for a second-stage LDO. Idling current is less than 10mW. Additionally, these devices can also support secondary-side-feedback isolated flyback topology. 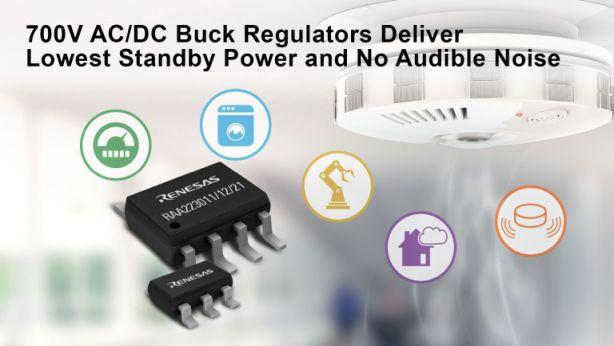 When operating close to their rated power, the units operate under constant off-time control, which serves to keep the switching speed above the range of human hearing. During light loads, converters employ the pulse frequency modulation (PFM) mode for better efficiency. The three buck regulators employ frequency dithering to reduce EMI.

The table below shows the maximum current outputs available at various line input voltages when each of the three units are adjusted for 3.3, 5, 12, or 24 volts.

The RAA223011 and the RAA223012 offer 5 and 2.5-watt outputs, respectively. Both units feature quiescent currents of less than 100μA, and standby power less than 10mW. These devices both feature typical RDS(ON)s of 14.5Ω.

The RAA223021 features a standby power of less than 20mW, with a quiescent current spec'd at less than 80µA. The typical RDS(ON) of the internal MOSFET is as low as 4Ω

Renesas offers evaluation boards for this series of buck converters, including: