In recent years the adoption of automotive-grade LED lamps is advancing from the viewpoint of power savings and design flexibility, while the number of lamps and brightness levels are increasing significantly. In the Asian region for example, where 2-wheeled vehicles are the main means of transportation for many, a number of vehicle manufacturers are demanding simpler circuit configurations for driving standard rear and license plate lamps in order to reduce costs and shorten development time.

However, until now thermal design issues have made it difficult for LED drivers that power LEDs to meet all of the various requirements in terms of number of lamps, brightness, safety, and costs.

In response, by analyzing the demands in India, the largest market for 2-wheeled vehicles, ROHM was able to develop LED drivers that solve these issues utilizing 2 new technologies. The BD183x7EFV-M (BD18337EFV-M/BD18347EFV-M) series incorporates a proprietary thermal dissipation circuit and individual LED control function specifically developed to significantly reduce board area along with application design load for LED lamps.

To minimize board area, the original heat dissipation circuit consolidates the multiple heat dissipation terminals for conventional output channels into a single terminal, while allowing ROHM to configure a 4ch high output (150mA/ch) driver into a compact 16pin package. Furthermore, the individual LED control function makes it possible to drive vehicle LED lamps with different specifications using a single driver (instead of the 2 conventionally required). 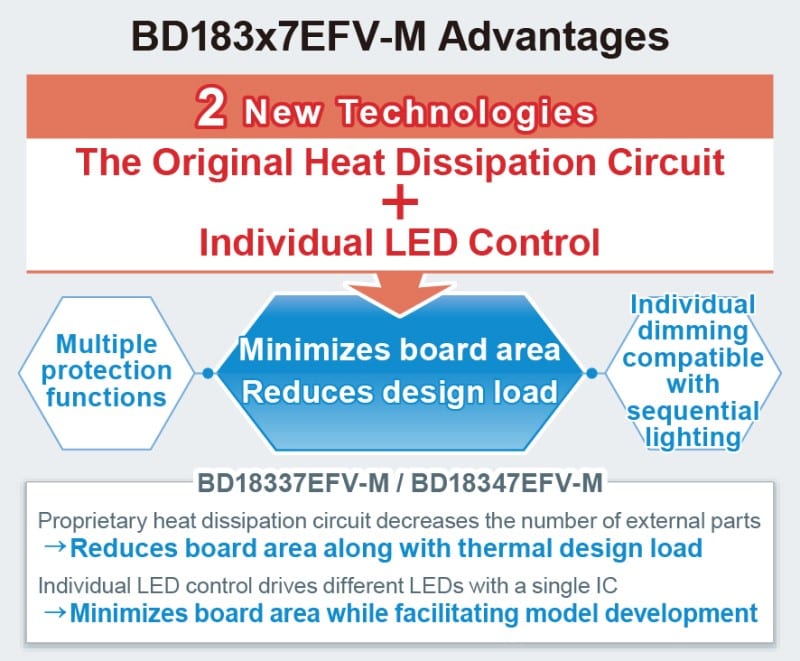 1-1. Heat dissipation circuit enables high power 4ch output in a compact size ROHM's heat distribution circuit consolidates the heat dissipation terminals previously required in conventional solutions with multiple output channels into one to achieve higher output power (150mA/ch) in a compact 16pin form factor while increasing the maximum number of channels currently available on the market from 3 to 4. In conventional vehicle rear-lamp systems, 2 LED drivers are needed to power 4 LED strings, but ROHM's new ICs make it possible to drive all 4 strings with just one driver, significantly reducing the number of parts along with mounting area.

Unlike existing systems which require 2 ICs to drive LED lamps with different specifications (i.e. rear and license plate lamps), ROHM's new ICs integrate an individual LED control function that can simultaneously drive 2 different types of LEDs, minimizing board area by consolidating the number of ICs from 2 to 1.

Conventional solutions requiring heat dissipation circuits for multiple channels must take a balanced approach to thermal design that considers the entire circuit, taking into account the variation in electrical characteristics of the heat dissipation resistance of the LED at each channel. In contrast, the BD183x7EFV-M series incorporates a thermal distribution circuit that consolidates the multiple heat dissipation circuit terminals into one, significantly reducing design load by allowing thermal design typically required for each channel to be completed in a single step.

The built-in control function makes it possible to select LED operation during abnormalities to either collective or individual LED OFF. In case, if a rear lamp fails to light up. Designers can select to turn all of the lamps OFF or only the failed string. Given that the safety standards for 2-wheeled license plate lights in the event of abnormalities vary from country to country, this latest series enables compliance with multi-regional laws with a single setting, reducing the number of redesign man-hours considerably when deploying in different countries.

Open/short detection for vehicle lamps, abnormality detection for each channel and other protection functions prevent damage to the circuit, LED driver and peripherals. 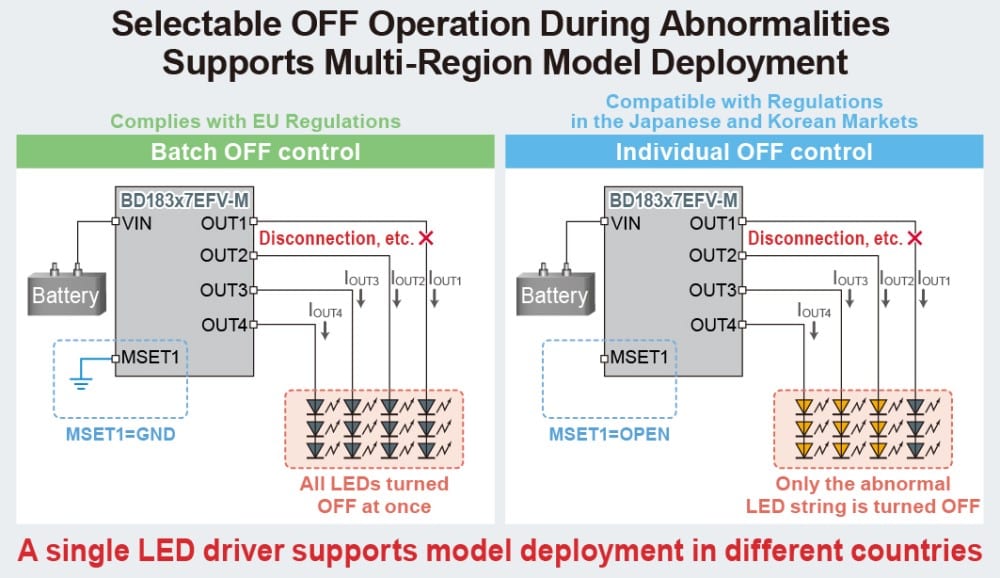