What are tantalum capacitors? 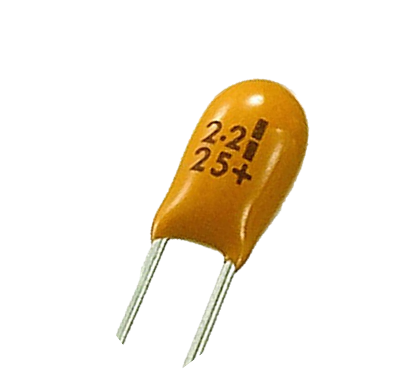 Tantalum capacitors are a subtype of electrolytic capacitors. They are made of tantalum metal which acts as an anode, covered by a layer of oxide which acts as the dielectric, surrounded by a conductive cathode. The use of tantalum allows for a very thin dielectric layer. This results in a higher capacitance value per volume, superior frequency characteristics compared to many other types of capacitors and excellent stability over time. Tantalum capacitors are generally polarized, which means that they may only be connected to a DC supply observing the correct terminal polarity. The downside to using tantalum capacitors is their unfavorable failure mode which may lead to thermal runaway, fires and small explosions, but this can be prevented through the use of external failsafe devices such as current limiters or thermal fuses. Technology advances allow tantalum capacitors to be used in a wide variety of circuits, often found in laptops, automotive industry, cell phones and others, most often in the form of surface mounted devices (SMD). These surface mount tantalum capacitors claim much less space on the printed circuit board and allow for greater packing densities.

Tantalum capacitors are electrolytic capacitors which use tantalum metal for the anode. They are polarized capacitors with superior frequency and stability characteristics.

Tantalum electrolytic capacitors are exceptionally polarized devices. While aluminum electrolytic capacitors, which are polarized as well, might survive a briefly applied reverse voltage, tantalum capacitors are very sensitive to reverse polarization. If a reverse polarity voltage is applied, the dielectric oxide breaks down, sometimes forming a short circuit. This short circuit may later cause thermal runaway and destruction of the capacitor.

Tantalum capacitors have a potentially dangerous failure mode. In case of voltage spikes, the tantalum anode may come in contact with the manganese dioxide cathode, and if the energy of the spike is sufficient it may start a chemical reaction. This chemical reaction produces heat and is self-sustaining and may produce smoke and flame. To prevent this thermal runaway from happening, external failsafe circuitry such as current limiters and thermal fuses should be used in conjunction with tantalum capacitors.

Construction and properties of tantalum capacitors

Tantalum electrolytic capacitors, just like other electrolytic capacitors, are consisted of an anode, some electrolyte and a cathode. The anode is isolated from the cathode so only a very small leakage DC current may flow through the capacitor. The anode is made of pure tantalum metal. The metal is ground into a fine powder, and sintered into a pellet at high temperatures. This forms a very porous anode with a high surface area. A high surface area directly translates to an increased capacitance value.

The anode is then covered with a layer of insulating oxide, which acts as a dielectric. This process is called anodization. This step must be precisely controlled to reduce tolerances and ensure correct capacitance values as the extent of oxide growth determines the dielectric thickness.

Applications using tantalum capacitors take advantage of their low leakage current, high capacity and long term stability and reliability. For example, they are used in sample and hold circuits which rely on low leakage current to achieve long hold duration. They are also commonly used for power supply filtering on computer motherboards and cell phones due to their small size and long term stability, most often in surface mount form. Tantalum capacitors are also available in military specifications versions (MIL-SPEC), which offer tighter tolerances and a wider operating temperature range. They are a popular replacement for aluminum electrolytics in military applications because they do not tend to dry out and change capacitance over time. Medical electronics also rely on tantalum because of their high stability. Audio amplifiers sometimes use tantalum capacitors where stability is a critical factor.